A former nurse claims she is being forced to live in her car and eat dog food because of swinging cuts to her benefits. Ann Cumberland-Quinn, 56, say she has struggled since her Personal Independence Payment (PIP) was stopped following a review in December. She was then dealt a further blow when her Employment and […] 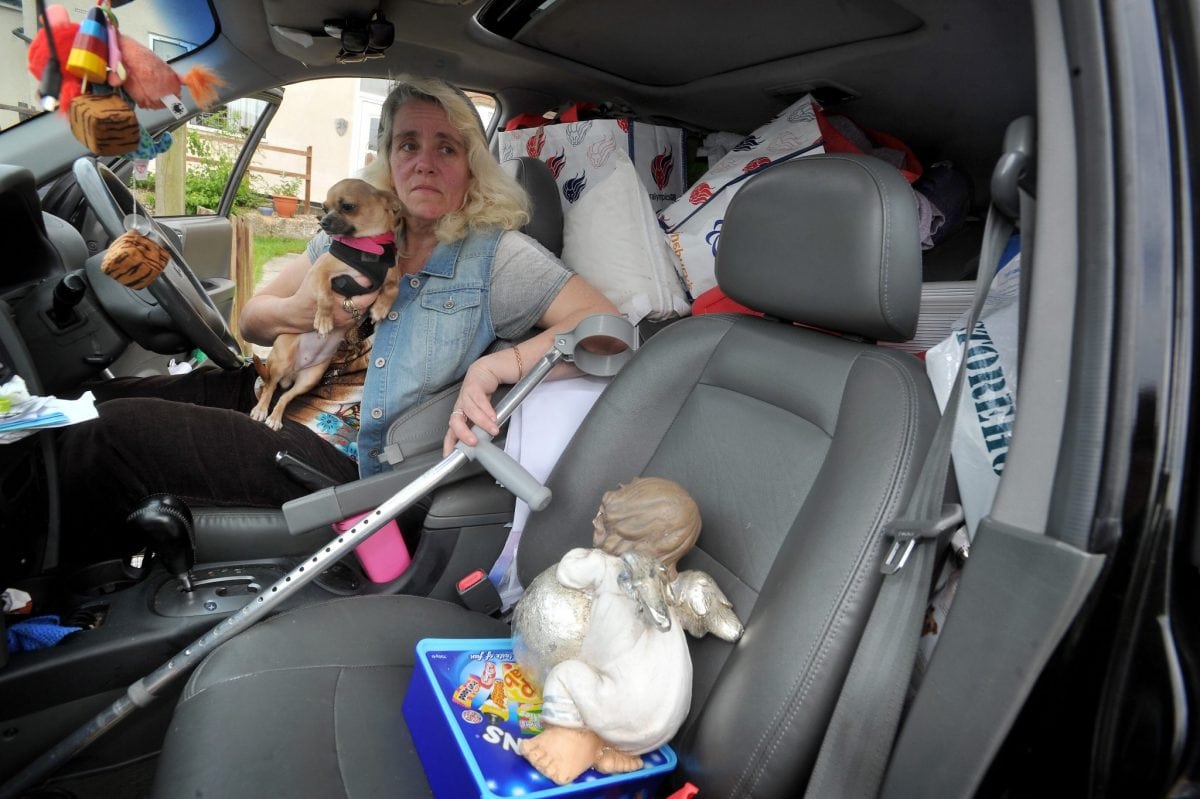 A former nurse claims she is being forced to live in her car and eat dog food because of swinging cuts to her benefits.

Ann Cumberland-Quinn, 56, say she has struggled since her Personal Independence Payment (PIP) was stopped following a review in December.

She was then dealt a further blow when her Employment and Support Allowance (ESA) benefit was slashed to £250 a fortnight from £375 in February of this year under government cuts.

Ann has been living in her car on and off with her dog Chanel since losing her social housing bungalow in June 2015.

She claims this was down to a mix up with her ESA payment she relied upon to pay the rent.

Since then she has been left feeling overwhelmed by the prospect of finding a home, relying instead upon homeless shelters and the goodwill of strangers.

She said: “I’ve been living in a car for a year-and-a-half. I just park the car up wherever I can find because I’m ashamed. I’m keeping out of the way of everybody. I’ve had enough and I’m tired. My head is banging with all this.”

Ann, who suffers from neuropathy and owns her own car, said she can no longer afford the costs of housing following the changes to her benefits.

She says being of no fixed abode is also hampering attempts to find a home. She continued: “I’ve got no family anymore and the councils are not going to house me because I have no connection anywhere. They’ve said ‘go live with your mum and dad’ I said: ‘I will be at this rate. I’ll be in the ground with them, I can’t dig them up.’

“I want some money to live and I’m not living, I’m just existing.

“All my nerve endings are dead. That ‘s why I’m incontinent and my legs have swollen up. I’ve got my little dog – she keeps me going.”

Before the cuts the ex-nurse, who once worked at The Princess of Wales Hospital, in Ely, Cambs., claims she received £550 in benefits.

She now feels abandoned by the country’s welfare system and social housing provision.

She is currently homed in her car in ely, Cambs., and previously lived in a bungalow in Mildenhall, Cambs.

A spokeswoman from Department for Work and Pensions confirmed Ann no longer receives her PIP allowance and had her ESA reduced from February this year, but she still receives payments every two weeks. Angela Parmenter, housing and community safety manager from East Cambridgeshire District Council said: “Our housing team works with anyone in the district who is homeless or threatened with potential homelessness.

“We will always try to ensure that nobody is homeless whatever their circumstances. When a person is considered to be vulnerable, interim temporary accommodation will be offered however the applicant does not have to accept it. We work tirelessly to prevent homelessness and rough sleepers in our district.”