When Rainer Becker opened Roka – a high-end ‘Modern Japanese’ restaurant – in Fitzrovia during 2004, the space soon became renowned for attracting punters that would have made today’s Novikov, Nobu and Sexy Fish crowds seem desirable. On a humid Wednesday some 13 years later, still, I’m sat in the downstairs bar at a table […] 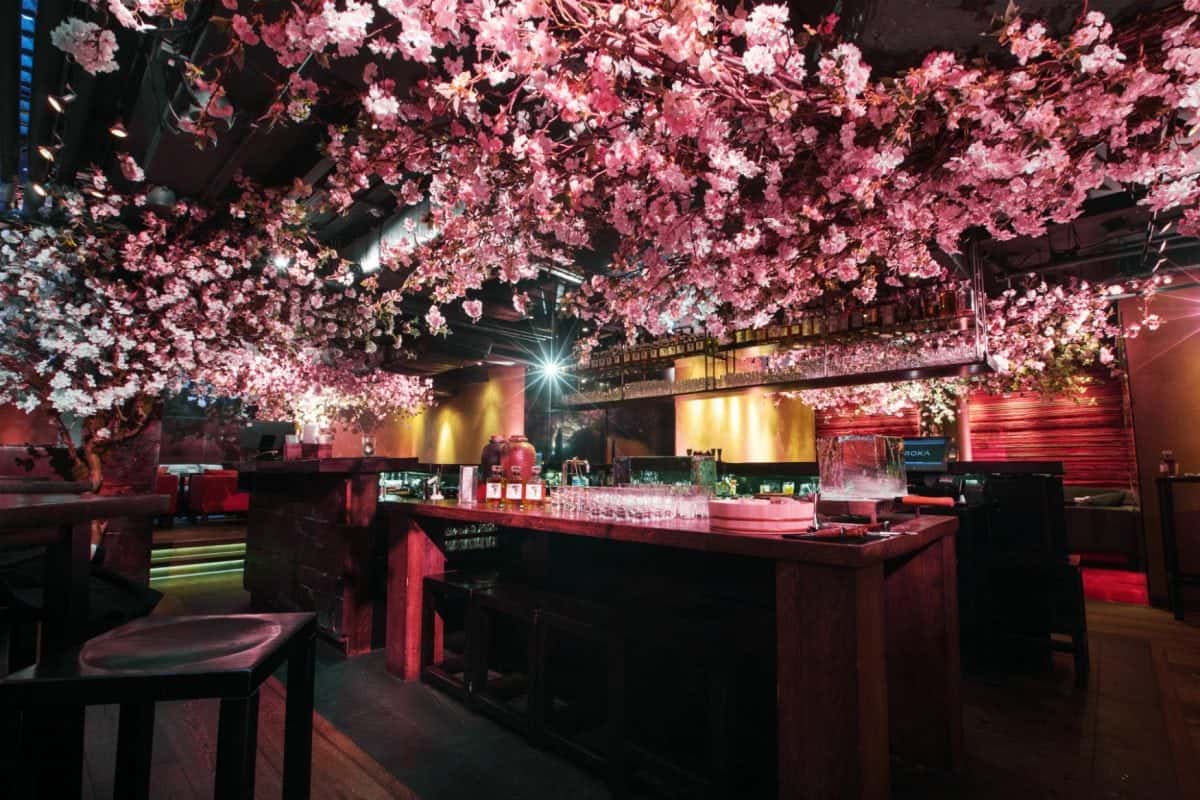 When Rainer Becker opened Roka – a high-end ‘Modern Japanese’ restaurant – in Fitzrovia during 2004, the space soon became renowned for attracting punters that would have made today’s Novikov, Nobu and Sexy Fish crowds seem desirable.

On a humid Wednesday some 13 years later, still, I’m sat in the downstairs bar at a table beside an obnoxious, overfed Texan – boasting of how he allegedly knows Prince Charles. Wearing a white body-con Ralph Lauren shirt (possibly from the children’s clothing floor of Harrods), he’s the spitting image of the Michelin man, as though lost on his way to Bibendum. Living in London, no less, we should all know, by now, that hell is other people. Yet we mustn’t let a restaurant’s clientele ruin the overall experience. Especially when it’s on the rare occurrence that everything else is just as marvellous as can be.

Shochu Lounge, restaurant’s basement bar, is currently celebrating Cherry Blossom season with a stunning Sakura installation that’s taken over the informal drinking and dining space. Joining the rosy blossom canopies, the bar team has also created a menu of bespoke cocktails favouring Japanese Suntory Whisky (each £11.90). Inside, the windowless room is low-lit with a central bar, comfortable lounge seating, art that wouldn’t seem out of place on a Gorillaz album cover, and a live DJ (bizarrely) who enjoys his Wednesday evening set more than anybody else (perhaps less surprisingly).

From the new menu, the Cask Old Fashioned is a take on the Prohibition classic, favouring Yamazaki Distiller’s Reserve (Japan’s best-loved single malt) instead of classic bourbon, no less, served over an aesthetically pleasing cricket ball of carved ice. Instead of offering a classic bitter-sweet profile, the Yamazaki whisky is rich and multi-layered while some sweetness comes from sobacha syrup, sherry and plum sake. Elsewhere, in keeping with the current theme, a Sakura Sour is a twist on a whisky sour with blended, un-aged Hibiki Japanese Harmony, kumquat, peach and (of course) Cherry Blossom. Also on the drinks menu, a kitsch Samurai-shaped vessel contains a sensationally balanced combination of Japanese Nikka from the Barrel whisky with luscious flavours of banana and sesame. Naturally, the menu also vaunts a tremendous selection of Shochu and Sake.

Shochu Lounge’s best asset, nonetheless? The entire food menu from the upstairs restaurant is available – providing guests with a chance to sample some of London’s best Japanese food in an informal setting. Sashimi of Yellowtail tuna is fanned across the plate to resemble a flower, with a powerful dressing of yuzu and white truffle, each possessing bold flavours which counteract one another without overpowering the fish. A boat of various sashimi prizes slivers of raw fish, served over ice. Tonight’s selection includes scallops the size of a baby’s fist, salmon, trout, Yellowtail and marbled Otoro tuna – the ocean’s answer to Wagyu beef – that stands out as the best thing eaten all evening, closely followed by a tartare of controversial Bluefin tuna, topped with a raw quail’s egg yolk.

Actual Wagyu beef comes raw, settled above beds of sticky rice, wrapped in nori seaweed and topped with equally opulent Oscietra caviar, while bite-sized maki rolls combine all sorts of prized ingredients from soft shell crab with kimchi (surprisingly pleasant) to prawn with fatty avocado. Pan-fried dumplings have a sweet filling of black cod, crab and crayfish, encased with paper-thin dough that’s joined by a sour, spiced sauce to excite the palate. Black cod with yuzu miso cooked on the robata, although cooked-well, has a flavour that’s, nonetheless, comparatively underwhelming. Far better, however, are perfectly-caramelised skewers of scallop, topped with wasabi and shisho (a member of the mint family), plus aggressively grilled lamb cutlets marinated with ‘Korean spices’, which demand to be taken in hand and eaten like hot, burly lollipops.

Finally, ROKA’s dessert platter is a monstrous behemoth, almost too big for the table. Various scoops of fruit sorbet are joined by masses of fresh, exotic fruit, yoghurt and almond cake, plus a dark chocolate pudding that exudes a puddle of decadent matcha-infused chocolate filling, like lurid green magma from a diabetic coma-inducing volcano. The entire Shochu Lounge experience, with dinner, is expectedly expensive – but the food (sashimi in particular) is simply unforgettable – and for all of the right reasons. In addition, the splendid cocktails are served in a visually outstanding setting (the Cherry Blossom installation runs until 7th June). Ignore the other guests and you’re almost guaranteed a delightfully immersive overall experience.

Further information on Shochu Lounge, ROKA and the Sakura installation can be found at rokarestaurant.com.