"I'm so grateful for what has happened. When I found my old van I was crying like a baby, I couldn't believe it. But since then I have seen how amazing, kind and generous people can be." 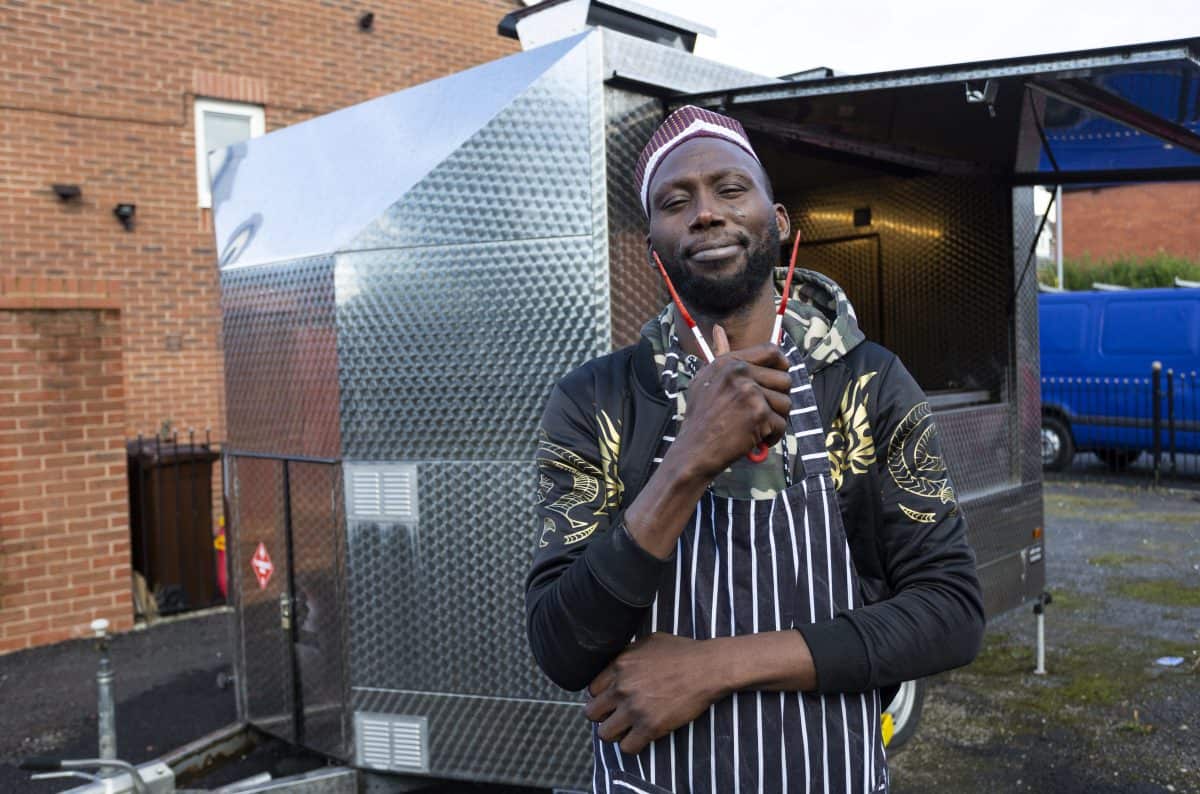 A food seller whose van was torched in a suspected racist attack is celebrating – after a crowdfunding campaign raised £85,000 for him to buy his “dream truck”.

David Kamson watched on in horror last month as flames engulfed his food van, which he used to make and sell traditional food from his homeland Nigeria.

The 38-year-old said the arson incident came just hours after a man pulled in front of the van and verbally abused him, using the words “fucking immigrant”, then driving off.

At the time of the offense in September, police said they were treating the incident as “racially-aggravated criminal damage”.

Within hours of the alleged attack friends of David set up a crowdfunding page to help get him back in business, which to date has accumulated a whopping £85,000.

He has since pumped huge amounts of the cash into his work, including £24,000 on a brand new food van, which he unveiled today.

David, from Manchester, said: “I’m so grateful for what has happened. When I found my old van I was crying like a baby, I couldn’t believe it.

“But since then I have seen how amazing, kind and generous people can be.

“Now I have this amazing new truck, it really is everything I could ever have hoped for.”

David, who moved to England aged 12, went into business in 2017 after having a dream about making a traditional type of Nigerian food called suya – a spicy meat skewer.

The very next day he bought the ingredients and started selling on the street.

Having received rave reviews from his punters, David saved up for a trailer and, in 2018, he bought one for £3,000 in a bid to take his business to the next level.

Sadly within around two years it had been torched to the ground.

David said his trailer was parked close to home in the Moston area of Manchester when it was targeted in the early hours of September 22.

He said: “I couldn’t believe my eyes, the trailer had been torched to the ground.

“It was just a pile of ashes. I couldn’t do anything but cry my eyes out, I was devastated.”

David added: “I was just about to start selling again after all this coronavirus stuff as well.

“I wanted to start bringing a bit of joy back into people’s lives with my food and then this happened.”

David posted some photos and videos online of the scene and within hours some locals had set up a crowdfunding page to help.

He said: “I was overwhelmed by the support, it was unbelievable.”

Since the campaign David has used the money to buy his dream trailer, which is fully fitted with every gadget he could wish for.

He said: “It’s absolutely amazing, there is everything I could ever need – I’m so happy with it.”

David, who also works as a DJ and a photographer, has used some of the money to update his equipment.

He said: “I have the best speaker in Manchester now.”

Although David still “feels pain” over what happened last month he said he would like to “move on” and get back to business.

He does not intend on pursuing the incident with police, claiming the person responsible has apologised personally.

He said: “I know who it was, I knew at the time. It’s no coincidence that I was racially abused and then the next day the trailer was burned down.

“But I’m moving on and keeping positive now.”

Unfortunately due to current restrictions and the fact he hasn’t yet been granted a licence, David has not officially opened back up yet.

However, he said: “I’ll get back to it in no time and the food will be better than ever.

Greater Manchester Police confirmed they were called to Pym Street, Moston, at 01:50 BST on 22 September and said they are treating the incident as “racially-aggravated criminal damage”.