"They are hunting with dogs. Banned. They are ripping foxes apart. Why are the police not here?" 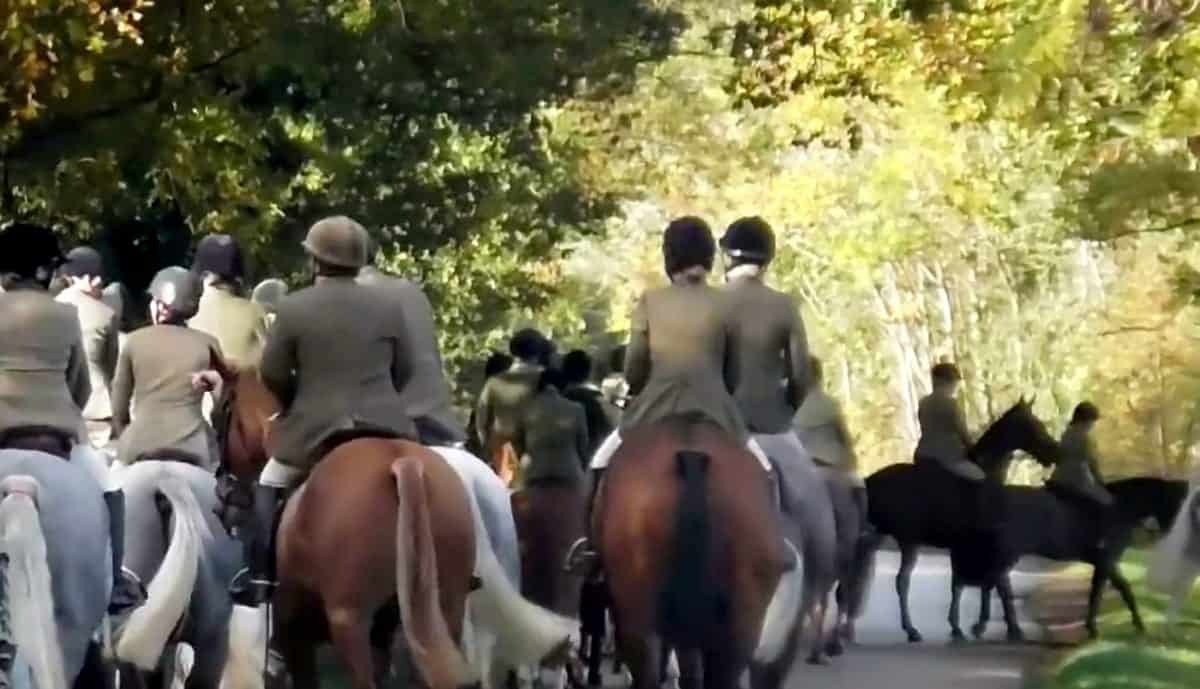 Police have launched an investigation after shocking footage emerged appearing to show a fox being savaged to death by a pack of crazed hunt hounds.

Members of the Warwickshire Hunt were recorded by saboteurs allegedly using their dogs to kill the animal during a meet at Arlescote, Warks., last Wednesday (28/10).

A pack of around 15 hounds can be seen swarming around the fox and chasing it across a field towards a road in the disturbing video uploaded to Facebook.

Graphic footage shows the fox being torn to pieces in a copse alongside the country road while members of the hunt saboteurs shout: “Oh my God.”

They then pick up the dead animal and follow the huntsmen as they leave, holding the corpse up to show the riders and telling them “This is what you pay for.”

West Midlands Hunt Saboteurs criticised the decision to reward a “small privileged minority” who “get their kicks out of watching small animals get torn apart.”

A spokesperson said: “To put things in perspective, most of us are making difficult sacrifices, worrying about the future, our jobs, our loved ones.

“Most of us can’t see our family. Some are facing local lockdowns.

“Yet there is a small privileged minority who have received government grants to allow them to have large gatherings of over 70, with no social distancing and no facemasks.

“All so they can get their kicks out of watching a small animal get torn apart by a pack of hounds.

“This fox stood no chance. It ran towards the road, was turned back by riders near the road and got trapped trying to jump a fence where it was killed and torn apart by the pack of hounds.

“The huntsman tried to retrieve the body but ran off and jumped back on his horse once he realised saboteurs were approaching.

“As if this wasn’t bad enough there were children present who may have witnessed this graphic violence.

“We would seriously question any parent who takes their child to a fox hunt and where there is a risk of exposing them to such brutal scenes.

“Who knows what psychological damage this will have caused them.”

Posting the footage on social media, the saboteurs wrote: “On Wednesday, October 28 the Warwickshire Hunt met at 8am at Glen Farm, Arlescote, Warwickshire for its final cub hunting meet before the main hunting season starts.

“The main hunting season due to officially start on the November 1 and the Warwickshire Hunt due to have it’s opening meet on Saturday, October 30.

“West Midlands Hunt Saboteurs were present and witnessed a fox running from the hunt towards the road.

“Hounds were seen running after it and then killing it not far from the road. Saboteurs retrieved the body. Warwickshire Police are investigating.”

Delia Sedgwick replied: “They need to be arrested. To intentionally cause pain and harm to an animal..wildlife here..is an offence.

“They are hunting with dogs. Banned. They are ripping foxes apart. Why are the police not here?”

Shelagh Bryant wrote: “Amazing they can meet in large groups & we can’t see our daughter in her bloody house, Government needs to get their priorities right!!”

A Warwickshire Police spokesperson said: “We’re aware of an incident in Arlescote on Wednesday and an investigation is currently underway.

“We appreciate this is an emotive issue and ask anyone with any evidence to please report it directly to us, quoting incident number 71 of 28 October.”