"If there's one message I could get out there, it's that even when this is all over, there are still struggling people in our communities, and we cannot walk away from them." 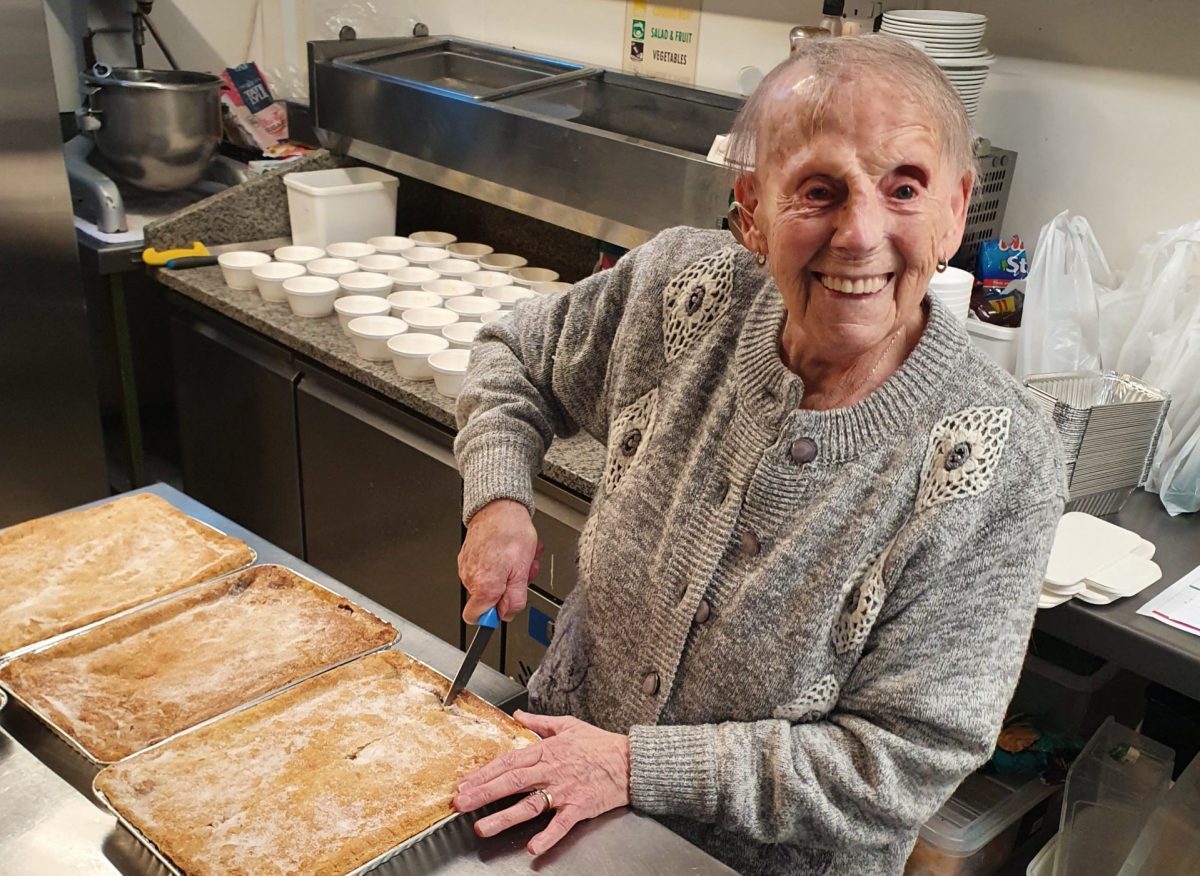 Flo Osborne who has made pies for hungry children. Credit SWNS

A great-great-grandmother has rallied to Marcus Rashford’s calls and has baked hundreds of pies – which will help to feed hungry kids during half term.

Keen baker Flo Osborne, 89, has thrown herself into pie-making during lockdown to help feed those going hungry – and sometimes produces as many as 20 a day.

Flo gets up at the crack of dawn – sometimes as early as 4.30am – to get to work in her tiny kitchen in Harwich, Essex, where she can only bake two or three pies in one go.

But the selfless pensioner, who has five great-great-grandchildren, says she loves to help people – and called footballer Marcus Rashford’s campaign a “lovely idea”.

Flo, who lives in sheltered accommodation in Harwich, said: “I saw it on the news and I thought, that’s lovely.

“I have been baking pies throughout lockdown to help vulnerable people in the community, and I love doing it. It keeps me going, and gives me something to do.

“But I thought, I would love to help the little ones, too. I’ve even been thinking about baking miniature pies for the children.

If I can help them, I will

“Some people say I’m mad, but I just tell them that I love to help other people. If I can help them, I will.”

Flo, who pays for all her own ingredients for the pies, says that her most popular pie is her cherry pie – but that she also likes to bake apple pies, and even makes savoury steak pies.

She also does not follow any recipe, and does not weigh any of her ingredients out – having learnt to bake simply from watching her own mother.

She said: “People always ask me for my recipe, or ask me what my secret is.

“I just mix the pastry up the way I want it to. I know what it should feel like so I go with that.”

Flo’s batch baking started back in April, when she was approached by firefighter Les Nicoll for help with his community campaign, North Essex Support Team (NEST).

Les, 69, set up the support group at the start of lockdown to help look out for the elderly and vulnerable around Harwich, who were unable to leave their homes due to Covid.

After setting up a hot food service to deliver meals to those who needed it, Les put out an appeal on Facebook for local chefs to help prepare the food.

And Flo’s son, Graham Osborne, 58, who owns hotel and restaurant Samuel Pepys in Harwich, offered his services – and also told Les that his mum could make a “mean cherry pie”.

“We have lots of people who send us cheesecakes or cupcakes to help us out with our food deliveries – but none of them are 89. She’s definitely our oldest baker.

“We probably get about 20 pies from Flo every fortnight, and each of them make about 16 servings.

“But she’ll always make extra pies so that our volunteers can enjoy them, too.”

Les said that the team at NEST – which is now made up of almost 170 volunteers – have had close to 200 pies donated by Flo since the start of April.

And he added that she is helping them with extra pies this week during school half-term, as they support extra struggling families who are not getting free school meals for their children.

Les said: “We have been approached by social workers who have let us know which families are really struggling during the half-term week.

“So we’re doing a separate hot menu especially for those families this week, where we’ll be delivering portions of spaghetti bolognese out to them.

And speaking about the government voting against Marcus Rashford’s campaign to continue providing free meals to children over half term, Les called it “a disgrace”.

He said: “I have to say, I was very disappointed in the money the government has wasted, compared to how little it would have cost to feed these children.

“I will always say that the government is doing the best they can – but their handling of this has been a disgrace.”

Les added that, since the start of lockdown, NEST has delivered almost 5,000 meals to the vulnerable around Harwich, as well as doing almost 2,500 grocery shops, and picking up between 300 and 400 prescriptions.

He said: “It’s not just about delivering food, it’s about going to knock on someone’s door and check on them – whether they are elderly, or a struggling single mum.

“If there’s one message I could get out there, it’s that even when this is all over, there are still struggling people in our communities, and we cannot walk away from them.”

Meanwhile, Flo’s son Graham has said how proud he is of his mum for her efforts during lockdown.

He said: “I’ve always been proud of her. She’s great, and she’s been doing amazing.

“I grew up with her baking, so I think I kind of took it for granted. But I think what she’s been doing is brilliant, it’s really excellent.

“Even now, at almost 90, if I turned around to her and said, ‘Do you think you could bake 20 pies today?’, she wouldn’t flinch.

“She says it gives her something to do during the day, and gives her a reason to get up in the morning.

“She’s very caring. If she thinks she can do something for someone, she will.”