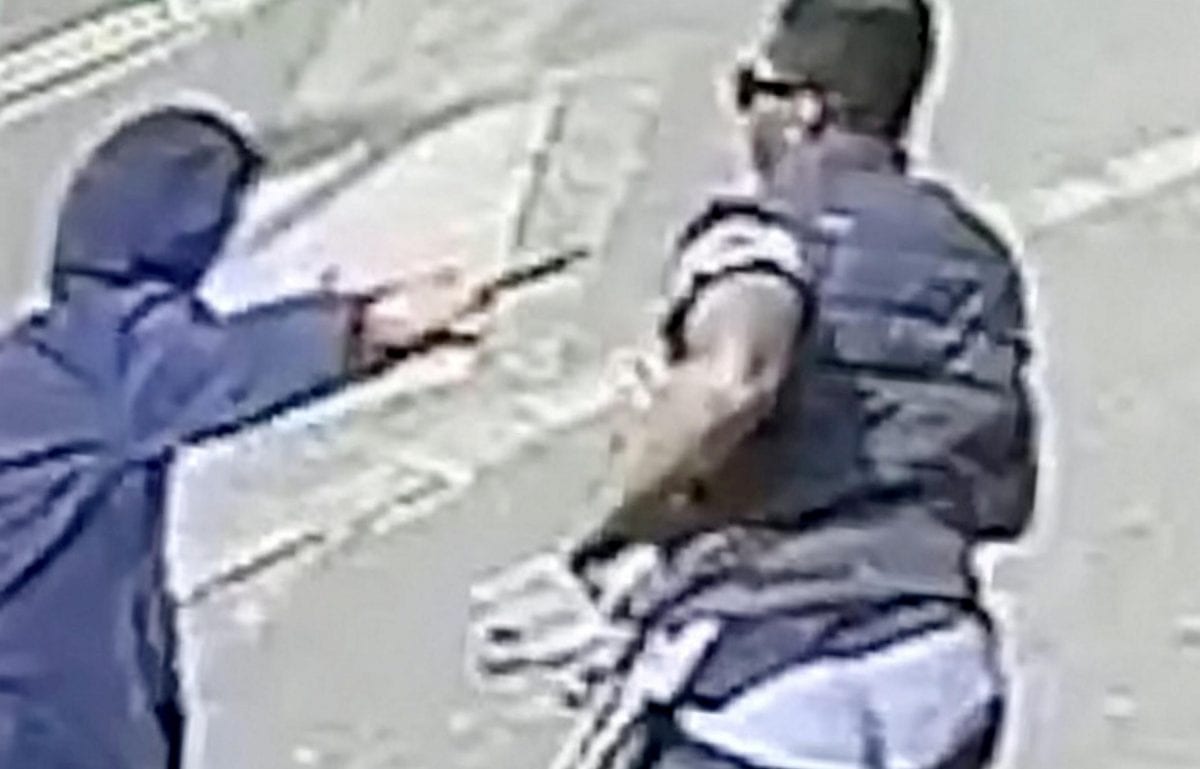 Two killers who were caught on CCTV stabbing a 16-year-old boy to death in broad daylight have been jailed for life.

Tragic Ozell Pemberton was knifed in the chest after he was chased by thugs Oscar Ingram, 21, and Mohammed Amir Hussain, 17.

Shocking CCTV from a bus showed Ozell desperately trying to fight for his life.

Ozell can be seen valiantly fighting off the pair with his fists and trying to escape as they slashed at him with knives.

The teenager died after Hussain stabbed him in the chest in the middle of Sutton Coldfield, West Midlands, on May 17 this year.

West Midlands Police released footage of the attack after a jury took six hours to find them guilty of murder at Birmingham Crown Court.

The clip shows Ozell desperately trying to run for help as he is pursued by Ingram and Hussain.

At one point, Ingram drops the knife as he launches at Ozell, only for Hussain to grab the blade which he plunges into the teenager.

Ozell is seen bravely fighting back with his fists but moments later he collapsed in front of horrified shoppers.

Witnesses tried to save him but Ozell had suffered fatal injuries and died at the scene.

Minutes before the attack, which happened on a hot afternoon in the middle of the town centre, Ingram and Hussain arrived at the train station wearing hoodies and coats to hide their weapons.

The court heard they had travelled to Sutton Coldfield in bid to get revenge for an incident which had happened in Pype Hayes Park hours earlier. Following the murder, Hussain boasted to friends that he had killed Ozell and days later he and Ingram were arrested on suspicion of murder.

Their clothes were examined and traces of Ozell’s blood were discovered on the waistband of Hussain’s trousers.

Ingram was jailed for life and told he will serve at least 24 years while Hussain was caged for a minimum of 16 years. After they were jailed on Wednesday, Ozell’s family released a statement which said: “Our lives have not been the same since the day we lost Ozell.

“We’ve been robbed of the best part of our family.

“It’s just so hard to comprehend. We can’t ever understand that our best boy won’t return home.

“Ozell, who had so much going for him and so many dreams and aspirations ahead of him, now can’t achieve them because of the selfish actions of others.

“We haven’t just lost a son but we have lost all of his achievements and accomplishments as well.

“He will never say ‘I’ve passed my driving test’ or ‘I’ve got my first contract’, or anything else that he would have been able to accomplish in the coming years.

“He is missed every day by all his family, his brother and sisters.

“As much as we hold on to the hope that this isn’t really real, every day we are reminded that it is.

“Our lives will never be the same again. Our King Ozell.” Detective Chief Inspector Edward Foster, from the homicide team, said: “This was a cowardly and shocking attack on Ozell who had his whole life ahead of him.

“It is always a choice to carry a knife and I cannot stress enough the dangers and implications that carrying a knife has. This has destroyed three young people’s lives as well as their families and friends.

“My thoughts remain with Ozell’s family and friends at this difficult time.

“We need parents, community leaders, schools and young people themselves to pass on the message that it is never OK to carry or use a knife.”