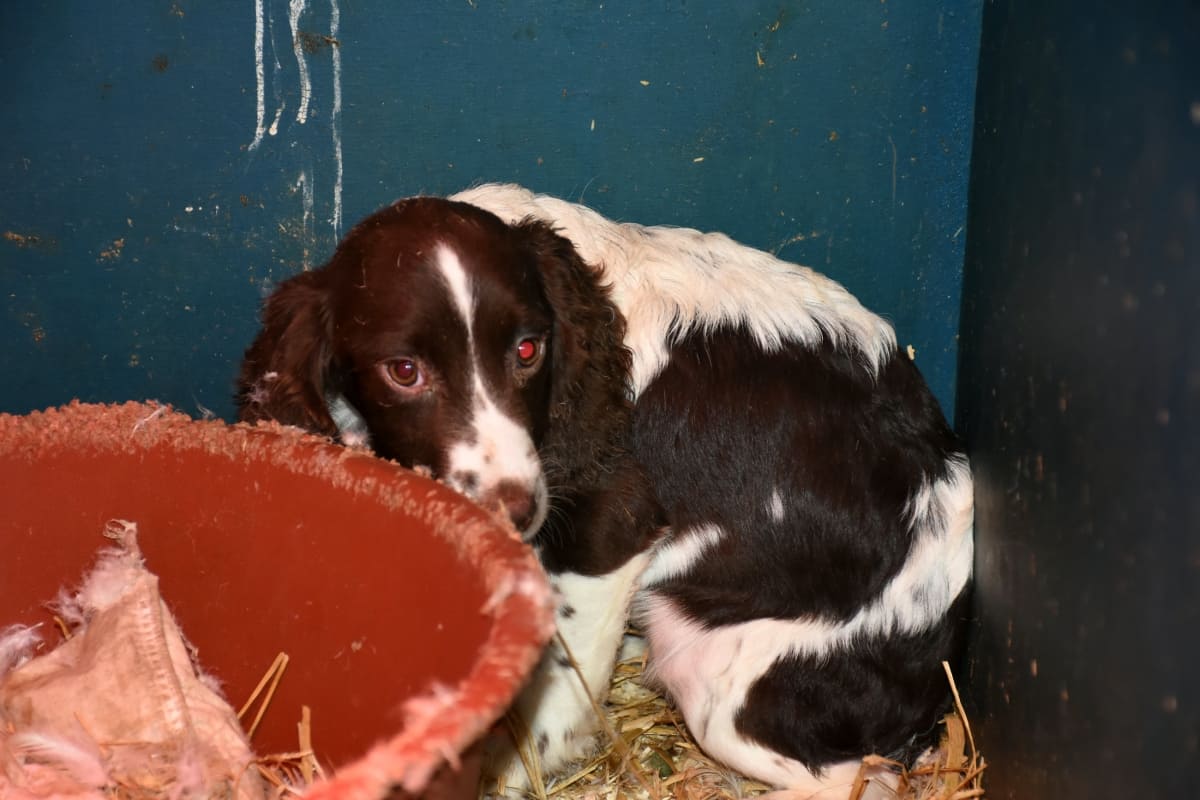 Cruel breeders who owned the ‘largest puppy farm in Scotland’ and are thought to have burnt the corpses of dead dogs in a van were convicted of animal cruelty offences.

Frank James, 53, and Michelle Wood, 29, kept nearly 100 dogs, including Springer spaniels and terriers, in ‘disgraceful’ conditions at a squalid farm in Aberdeenshire.

Investigators said the set-up was like a ‘battery farm for pups’.

James was banned from keeping more than two dogs in 2013, but is thought to have flouted that ban and continued regardless.

When a raid was carried out at East Mains of Ardlogie Farm, near Fyvie in Aberdeenshire, horrified investigators discovered 87 dogs including one just a few days old.

The Scottish SPCA had been tipped off after pet owners complained that their puppies, bought from the couple, were ill or dying.

Some years before James had been found to have 70 dogs in horrific conditions in cattle barns crawling with lice, skin sores and cysts, living in filth.

Following the investigation, James’ and two of his relatives pleaded guilty to welfare offences in October 2014.

James and his brother were banned from keeping more than two dogs for the next three years.

An undercover investigator for the Scottish SPCA said: “We believe this was the largest scale puppy farming operation in Scotland.

“The conditions these dogs were being kept in were absolutely disgraceful.

“It fell far below the minimum standard in terms of animal welfare and, given the environment and sheer volume of puppies, it was immediately evident these were not being kept as pets and the premises was effectively a battery farm for pups.

“Our investigation revealed dogs on site were being intensively bred with little to no regard for their welfare.

“On site, we found a burnt out van which had dog carcasses within, suggesting this was a means of disposing dead pups.

“We acted swiftly and reopened our investigation in to James’ when we received numerous reports of puppies who were either becoming unwell or dying within days of being purchased by unsuspecting members of the public.

“Much like the previous investigation, the squalid conditions we found these pups being housed in showed a total disregard for their wellbeing.

“Sadly, when dogs are bred in appalling conditions, it is very common for them to develop serious illnesses, medical conditions or even to die within weeks of being born.”

After the raid in 2017, all the 87 dogs as well as rabbits and ferrets which were found at the farm were rehomed after the charity took civil action.

James, of Duncan Street, Banff, Aberdeenshire, was found guilty of causing unnecessary suffering to dogs, ferrets and rabbits under Section 19 of the Animal Health and Welfare (Scotland) Act 2006, on July 19.

He was also found guilty under Section 24 for failing to ensure the welfare of the same animals at Aberdeen Sheriff Court on July 19.

Scottish SPCA chief superintendent Mike Flynn said: “Whilst every animal in our care receives all the love and attention in the world, it is not beneficial welfare-wise to spend months or even years in a rescue and rehoming centre until criminal proceedings conclude.”

“In our centres, care costs an average of £15 per dog a day so picking up the pieces from breeders who prioritise profit over welfare puts a massive strain on our resources.

“Thankfully, the decision to pursue a civil action in this instance means many of these animals found their forever homes long ago.”