Ray described feeling “traumatised” by desperately trying to help elderly people who sometimes go five days without food and mothers who do not have underwear for their kids. 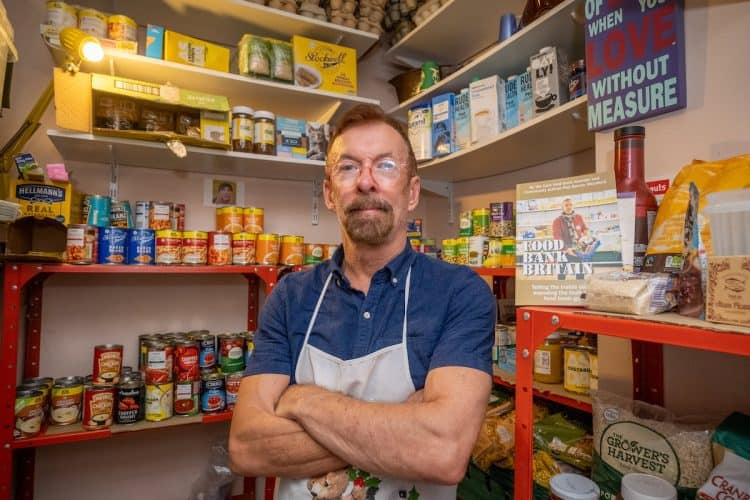 Britain’s biggest food bank might close as their energy bill for four fridge freezers is due to skyrocket to £30,000 – and could double again.

The local hero is terrified the operation will close because running their freezers has soared from £68 per month at the beginning of the year, to an eye-watering £498.

Ray said he is currently too scared to put the lights on, and is operating in the dark in fear of their increasing bills getting even higher.

It started off supplying 30 households with healthy meals during the pandemic, but as more people fall into poverty the foodbank now feeds 5,000 families each month.

He described food banks as “the last frontline”, and without them hundreds of thousands of pensioners, children, parents and students who rely on their work will be abandoned with nowhere left to turn.

Ray described feeling “traumatised” by desperately trying to help elderly people who sometimes go five days without food and mothers who do not have underwear for their kids.

Founded in 2014, the foodbank has also helped students who cannot afford deodorant or sanitary pads as well as old people living in a tent in the woods so at least nobody can charge them.

We Care Food Bank operates seven days a week in Lewisham, south east London, and every day Ray leaves work “a wreck” to care for his husband with cancer, and the Ukrainian refugee he has housed in his home.

If they cannot be saved, the foodbank will have to move from their bricks and mortar store to a telephone box, where they currently run a 24/7 community service called Under the Rainbow.

As winter sets in amid a spiralling cost of living, Ray predicts thousands more will visit their Lewisham hub that is already braced for closure.

He heard of other food banks running out of food because those who used to donate were now having to eat everything they bought.

One was forced to break into supermarket yards and steal food from the bins to feed people.

He said: “Who would have thought people would risk two weeks in jail, which is what you get stealing food and breaking into supermarket yards, to steal food to feed hungry people in Britain, in 2022? You couldn’t write this stuff.”

He described an ambulance taking an elderly woman who had had a stroke to their food bank, because they found she had no food in the pantry last week.

Ray said: “Last Friday, we had an ambulance arrive at our food bank with a disabled black lady who was a pensioner and she had had a stroke.

“So they brought her to our food bank, because it was the only place they knew she could get help.

“We gave her food, and then during a conversation realised she wasn’t in a fit state physically to cook using a cooker, so we gave her a microwave. We crowdfunded it online.

“Now even ambulances are bringing people to our food bank for help, even social services are sending people to us.

“Even the Trussell Trust [a large UK-wide food bank charity] are sending people to us because they are closed six days a week and we’re open seven days a week.”

As needy residents become increasingly desperate, Ray has been in awe – but also unsurprised – by some of the guerrilla tactics people are taking to feed one another.

He said: “One man went into Asda in Deptford and told everybody in the shop that he’d won the lottery, and that if they did their weekly shop he would pay for it.

“Everyone went to the cash point, to the self-checkout machines, and he went around the store and paid for 20 people’s shopping.

“After they’d all left the security guard realised that the card was declined, and the man didn’t actually have any credit.

“But by that time people had walked out of the door with a free shop courtesy of this man that had taken the initiative.

“That sort of guerrilla warfare there’s going to be more of.”

He is also an historian, and believes modernisation is doubling down on the immense toll the cost of living crisis is having on people.

Ray said that without neighbours to rely on because rent hikes have forced them out, many are also without furnaces to burn more affordable materials to stay warm, or soup kitchens to help them get food.

Ray said: “In the 1930s we had our neighbours, now you live in London your children have moved away because they can’t afford the rents in London anymore.

“They’re further away, you don’t have that network anymore. People don’t know who live in their streets.

“Because of modernisation they’ve taken all the coal fires away, so people can’t put coal on the fire and keep one.

“People don’t have these options they had back in the 1930s. So it is worse. And there’s no support, there’s no soup kitchens, all of them are facing bankruptcy.

“The biggest growth we have had under the Tories was food banks, and the biggest bust coming is food banks, which never even went bust in the Depression. It’s surreal. It’s unbelievable.

One of the many problems Ray witnessed every day is how the poorest “don’t have the luxury to protest”.

People with key metres, which he said totals three million in the UK, cannot join the calls to boycott bills because if they don’t pay, they don’t get electricity, he added.

For those on standing orders, if gas companies cut people off for not paying bills then the gas company can be criminally charged.

Ray added: “Isn’t that ridiculous? The poorest have no protection in law on energy bills.

“If you or I pay cash for something, we usually get a discount. It’s only the poor who pay cash up front for a key metre get exploited in this way.

“Nobody understands the issue, people forget that poor people don’t have the Internet or a smartphone.”

This is one of the many issues that We Care Food Bank has successfully campaigned on, free school lunch vouchers used to have to be printed out, but the poorest didn’t have access to a printer or computer.

The team also give all mothers free biodegradable bamboo nappies, saving every mother who visits their foodbank £800.

And they give advice on debt management, help those who can’t read or write with job applications, welfare claims and pensions.

Ray said the group struggle because they are the only food bank in the UK open seven days a week, and welcomes anyone who walks through their door.

“People who come to us are often the most vulnerable, people don’t plan to be in a crisis.

“If we did homeless people or refugees, we could get funding. But because we welcome any body that walks through our door we can’t get funding.

Currently the food bank feeds people who are referred by GPs, refugee centres, domestic violence shelters and others.

They also run a food pantry where anyone in crisis pays just one pound to sign up for the year, then every time they shop they pay five pounds and receive toiletries, washing powder, pet food, clothes and school uniforms and many other supplies.

Energy caps are only for residential properties, which means the bank is being charged the commercial rates for gas and electric.

Their current £30,000 a year gas and electric forecast might double when the October and April assessments for fuel costs come in.

To stay afloat, the We Care Food Bank needs to raise £25,000 before October, to cover a year of running costs.