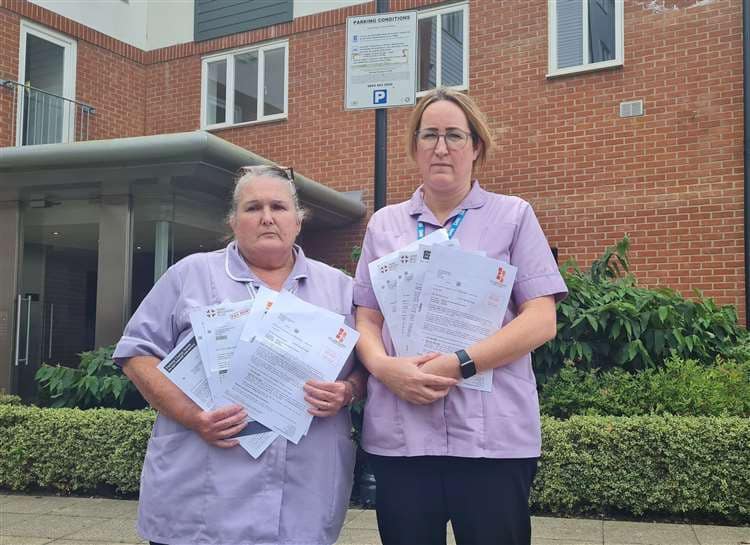 Two frontline NHS workers have had letters from bailiffs demanding cash after refusing to pay a parking fine when they were tending to a dying Covid patient.

Healthcare assistants Linda Somboongedd and Stacey Batten had parked on the estate in Canterbury for about 40 minutes on consecutive days to tend to the dying man.

Despite being in full NHS uniforms and having Covid and NHS stickers on their cars explaining their business they were both slapped with £60 fines from the private firm that have now risen to £170.

But a defiant Linda said: “They can lock me up – I’m not paying it.”

On April 1 last year, the grandmother and mum-of-six parked in Stonebridge Road – where visitor permits are required – to care for a terminally ill patient who had contracted Covid.

Linda, 59 said: “It was a parking bay near his flat. It had ‘visitors parking’ in front of it.

“I was in there about half-an-hour or 40 minutes, and a week later I got a ticket through the door.”

The same happened to Linda’s colleague Stacey, who had parked there the previous day to care for the same man.

Both Linda and Stacey were wearing their NHS uniforms when they visited the patient, who tragically died soon after.

Linda added: “We also have a Covid sticker on the front of our car from the NHS saying we can park outside, as long as we’re not obstructing, for a short period of time.

“And we also have an NHS sticker saying exactly the same.”

Both women appealed against their fines, which were issued by private firm UK Car Parking Management Ltd.

Linda continued: “They weren’t interested. They just came back with another letter putting the price up, saying if I didn’t pay it would go up again.”

The fines were initially £60, but since last April the women have received about seven letters each and that figure has almost tripled.

Following months without communication from the parking firm, the women have received letters from a debt recovery firm, which has prompted them to speak out about their situation.

Linda added: “It’s not even the money. I’ve got the money – I could pay it tomorrow.

Linda contracted Covid from a patient while carrying out her job, before passing it to her husband, who fell seriously ill and still suffers as a result.

She continued: “It’s scary enough for us going into these patients’ homes knowing the chance of catching it, without having these stupid people giving us parking tickets just for going in to help these people that are seriously ill.

“I’m not better than anyone else who’s been doing the job.

“We all worked really hard over the pandemic, and even now we’ve got lots of Covid patients – we’re still going out, we’re still doing our job.

“But we’ve still got to watch where we park our cars because of people like this.”

UK Car Park Management Ltd was contacted for a comment but has not yet responded.

Related: What is going on? Nurses ‘banned from drinking water’ and train drivers using incontinence products