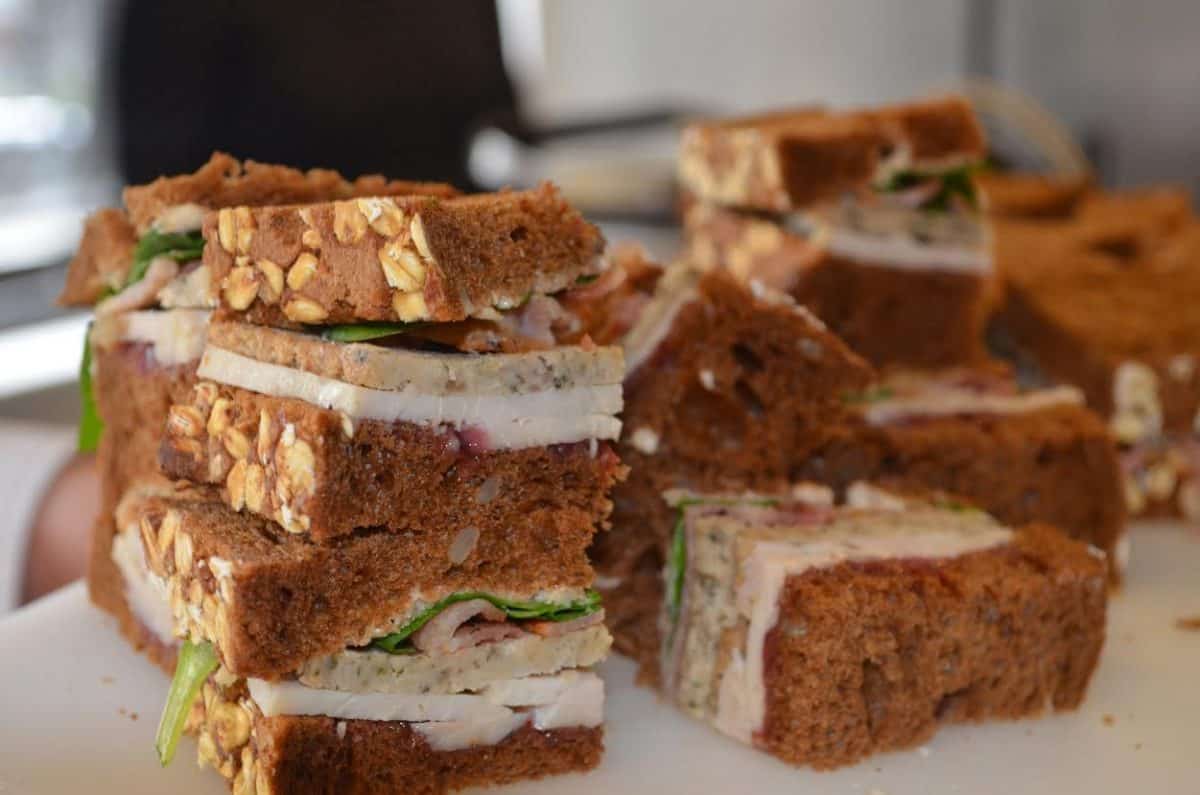 Yes, it’s only November – but Christmas is here. Well, in terms of food, drink and underwhelming streetlights, at least. In 2017, though, we’re not happy with just one Christmas dinner, judging the meteoric rise in popularity of Christmas sandwiches over the past few years.

Unsurprisingly, this year’s veritable feast of Christmas sandwiches is larger than ever, with a tremendous selection. Pret A Manger, for instance, have created their first entirely vegan Christmas sandwich, filled with a stuffing of grilled carrots, crispy onion, caramelised pecans, spinach, and a cranberry sauce with port and orange. Elsewhere, adventurous alternatives to classic turkey are also worth mentioning (Tesco’s vegan ‘bubble and squeak’, Waitrose’s ‘Spiced King Prawn Cocktail’). Others, not so much (Marks & Spencer’s vegan chestnut roast wrap with grape and cranberry chutney on a red pepper tortilla).

In the spirit of fairness, we’ve tasted a selection of ‘classic’ Christmas lunch fillings and ranked them based on three key factors: bread, filling and value. 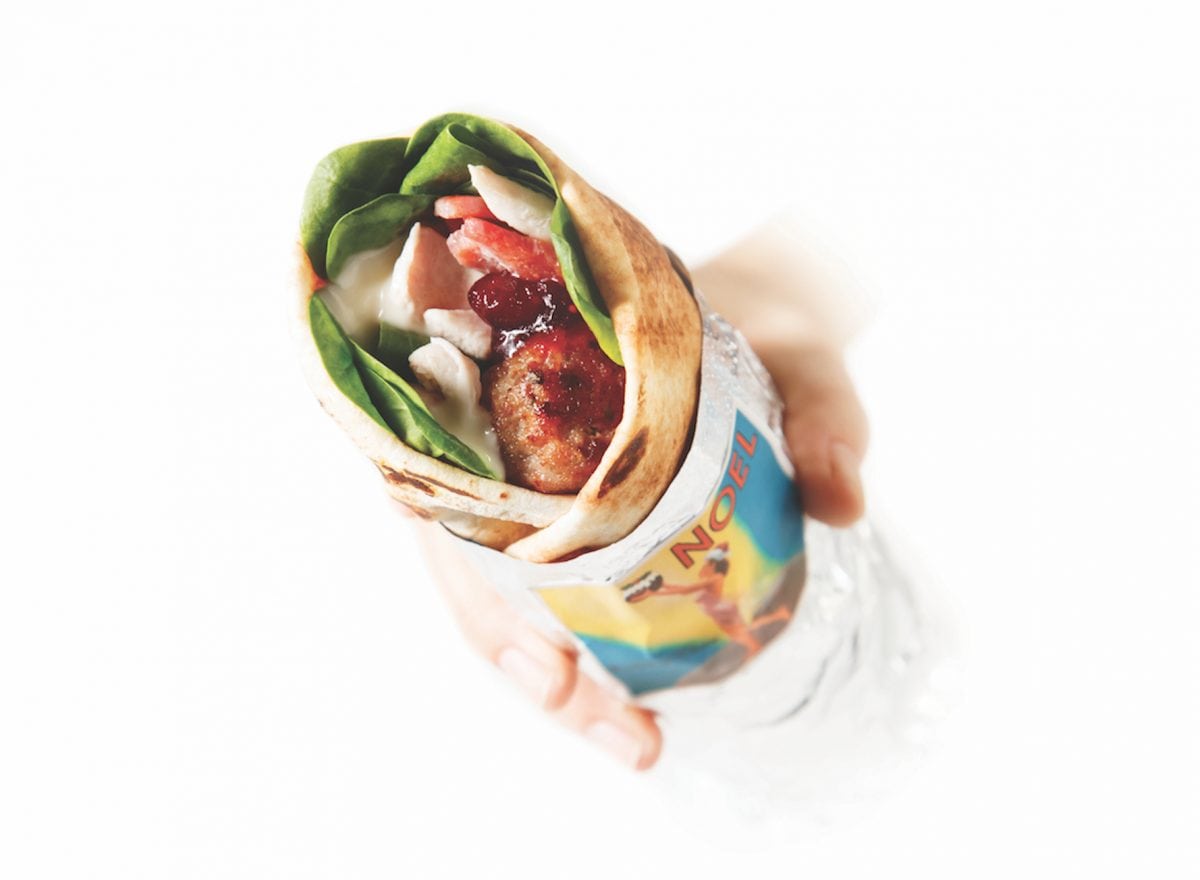 Who, honestly, considers mayonnaise a crucial part of Christmas lunch? Okay, nearly all Christmas sandwiches include mayonnaise in some form or other, but Leon’s The Christmas Wrap is swathed in sauce containing so much tarragon, it’s almost a béarnaise sauce – and not a palatable one. The rest of the filling is quite desirable though, and the flatbread is fluffy. Turkey slices should be moister, but the ham hock is unctuous and the stuffing balls harbour plenty of gratifying flavour. The accompanying slaw, nonetheless, has an evil taste oddly evocative of 9-volt batteries. 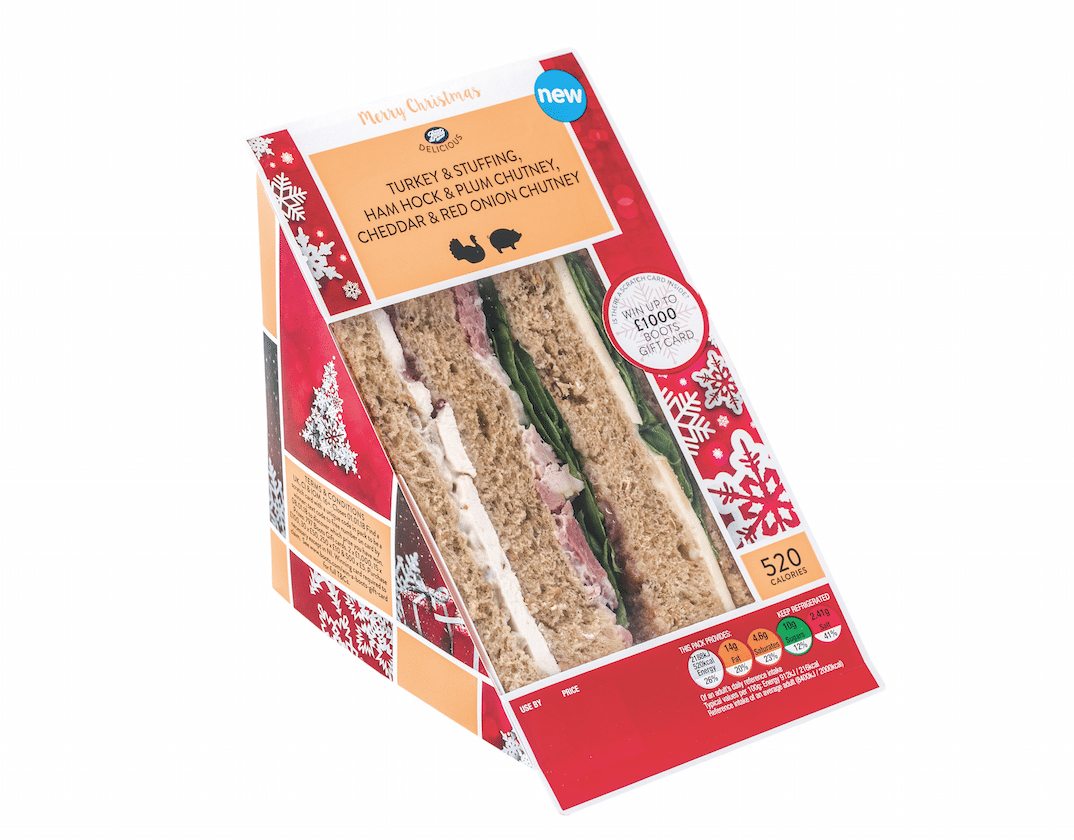 Available as part of Boots’ meal deal with famously exceptional value, this sandwich wins on budget. Otherwise, it’s quite unremarkable. The bread is firm and refrains from becoming soggy, the turkey is cooked well but rather bland. An overpowering taste comes from salty, fatty bacon that’s employed far too generously. Sweet cranberry sauce brings contrast, though a heavy-handed smear of mayonnaise is concentrated and mildly emetic.

Norfolk free-range turkey breast, stuffing, port and orange cranberry sauce are all sandwiched between two slices of malted bread. The taste of the stuffing is remarkable, rife with herbs, bacon and apricot, but the cooking of the turkey leaves a lot to be desired. Dry, over-cooked and under-seasoned, a bird of this quality deserves far better. More sauce is desperately needed, but not this slimy port, orange and cranberry-flavoured Brylcreem. 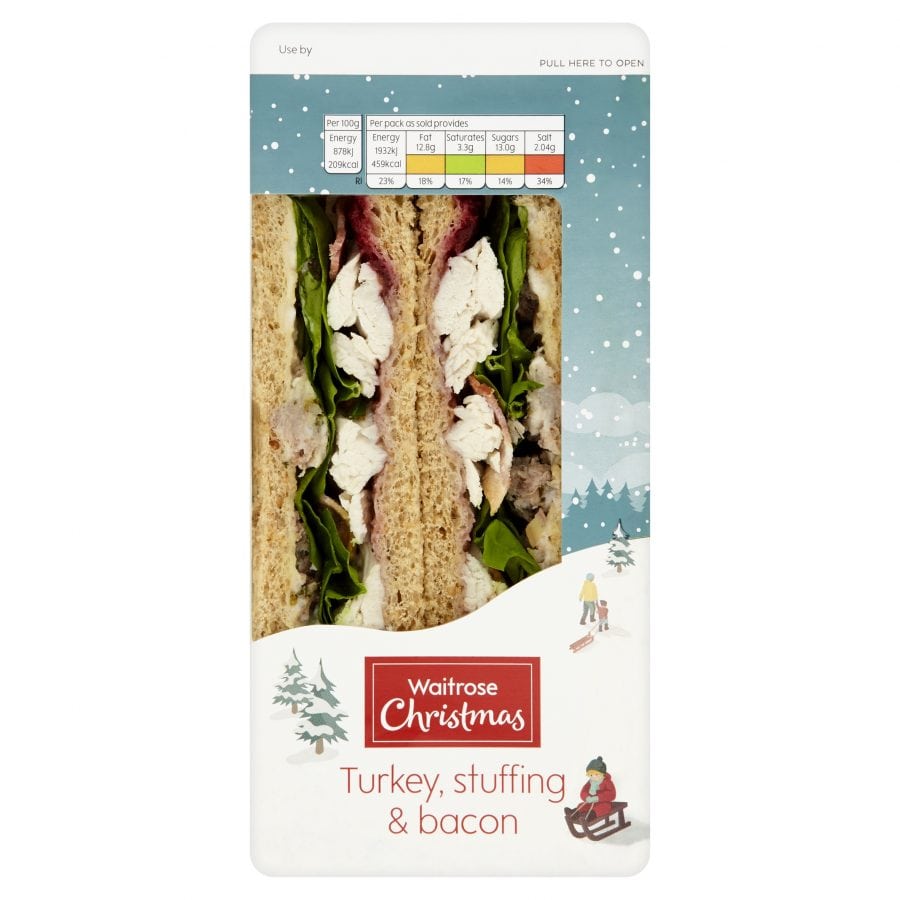 This ingredients line-up reads like a perfect sandwich. The bread is malty, alas soggy (far too much mayonnaise), and the filling is fine, but slightly parsimonious. The cooking of the turkey is also fine, as is the seasoning, but the main flavours are of heavily salty streaky bacon and cranberry sauce – although one of the better ones. I’d like to taste some more of the delightful pork and chestnut stuffing, which would hopefully prevail a little more against the cranberry/bacon if supplemented more generously. 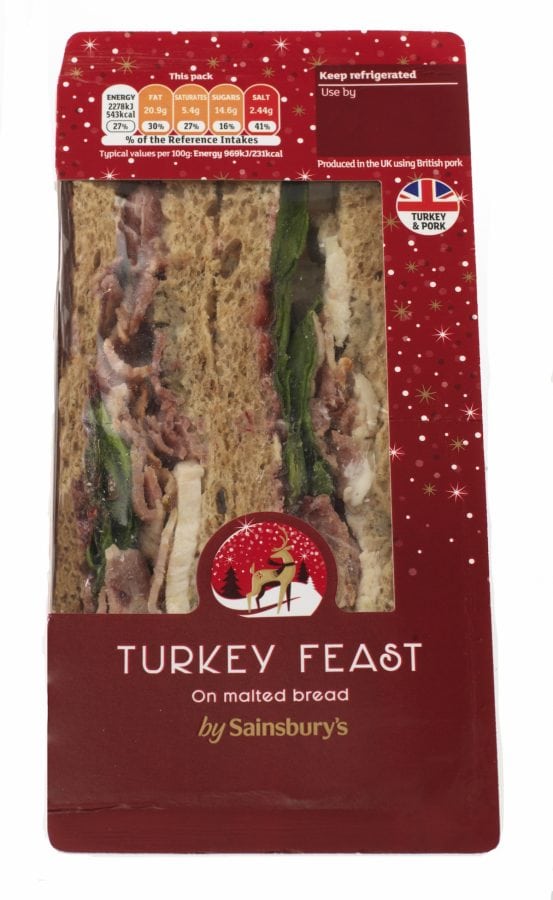 A turkey sandwich, apparently. Malty bread has bite and some seeds throughout; the bacon is maple-smoked; turkey satisfactory – but this all seems to be unnecessary effort, considering the entity tastes of very little besides stuffing (a good one, at that) and a whisper of sweet, jammy cranberry sauce. The crunch of spinach lends pleasing texture, but the taste is completely off balance. A fair stuffing sandwich, but a ‘turkey feast’; this most definitely is not. 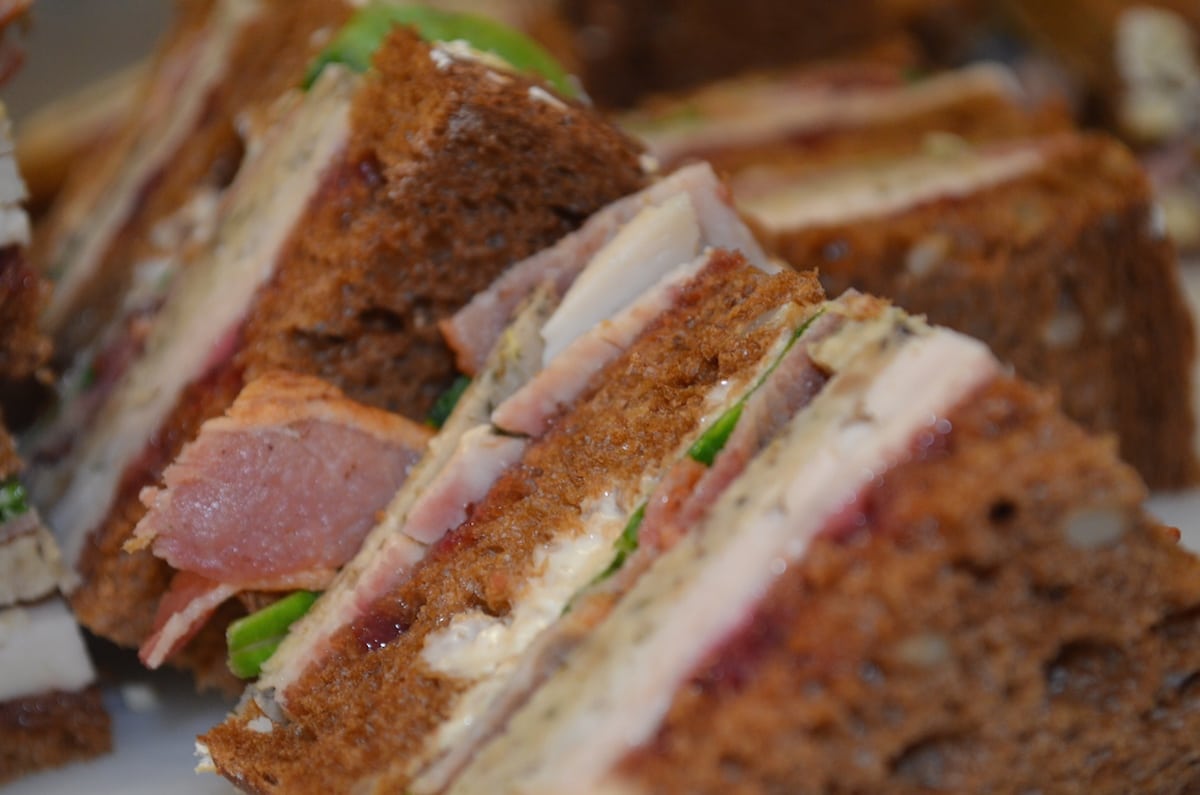 Working with The House of St Barnabas, 50p will be donated from each Benugo Christmas sandwich sale. Ensnared between slices of thick, seeded bloomer bread – which holds its own against the deep-fill – the turkey is cooked properly; equally thick slices of stuffing are potent with sage and onion; while horseradish mayonnaise is a welcome relief, albeit applied a little too generously. Brackish rashers of bacon, on the other hand, contrast the ample helping of cranberry sauce. 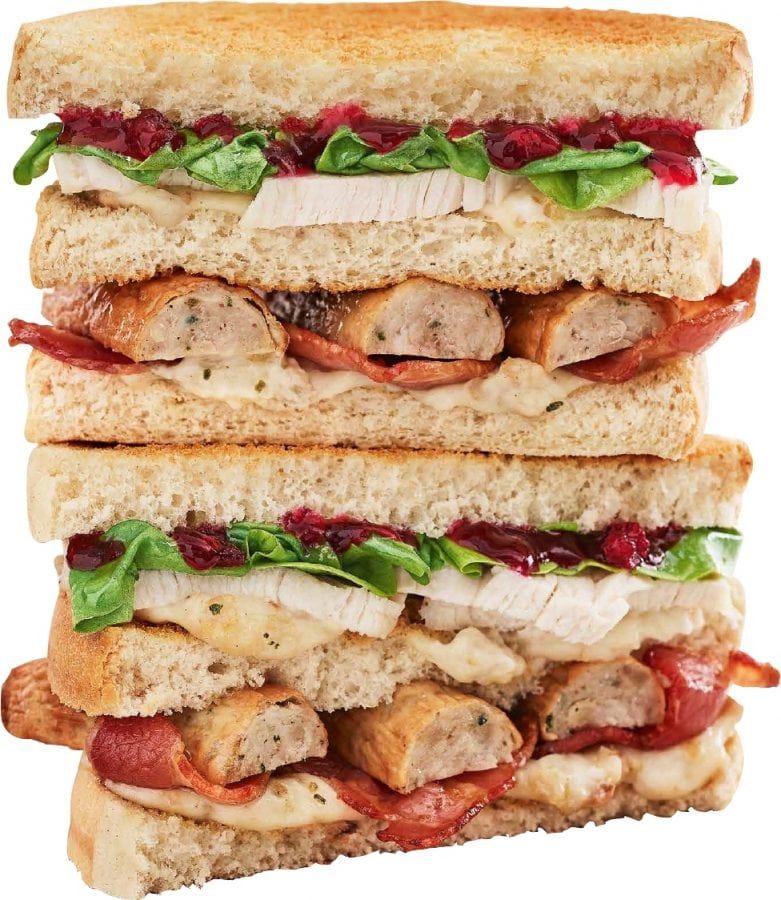 Cut into rectangles (not triangles) the malted bread is fairly parched. The filling, however, comprises succulent turkey and stuffing with profound sage. The inclusion of both Cumberland sausage and smoked streaky bacon is unnecessary, while a suggestion of mayonnaise complements the sweet cranberry sauce. Enjoyable overall. 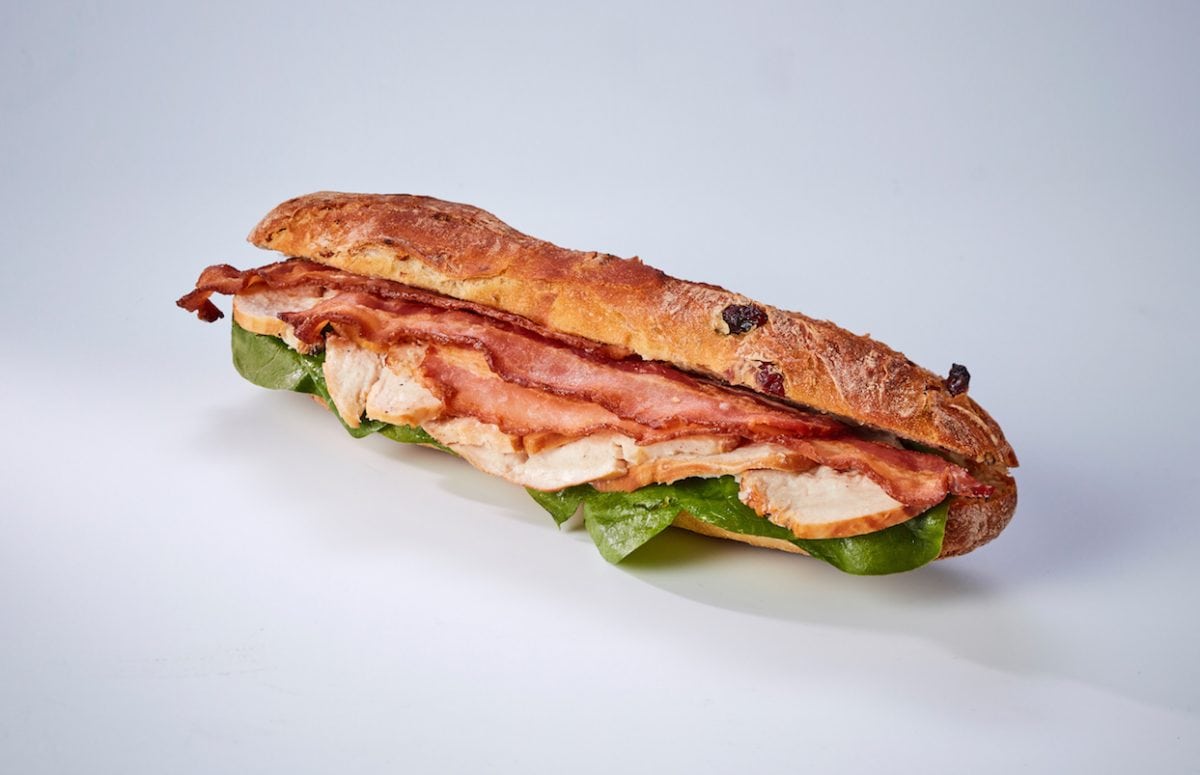 Voted best Christmas sandwich of 2016 by Time Out London, the sandwich’s sage and onion baguette flecked with cranberries in absolutely inspired, but a little hard. Slices of turkey and smoked bacon are joined by spinach, cream cheese and horseradish. The horseradish is interesting – a refreshing mayonnaise substitute, though cream cheese is a guest unwelcome at this Christmas party. Otherwise, the filling is good, but needs more sauce of some form. 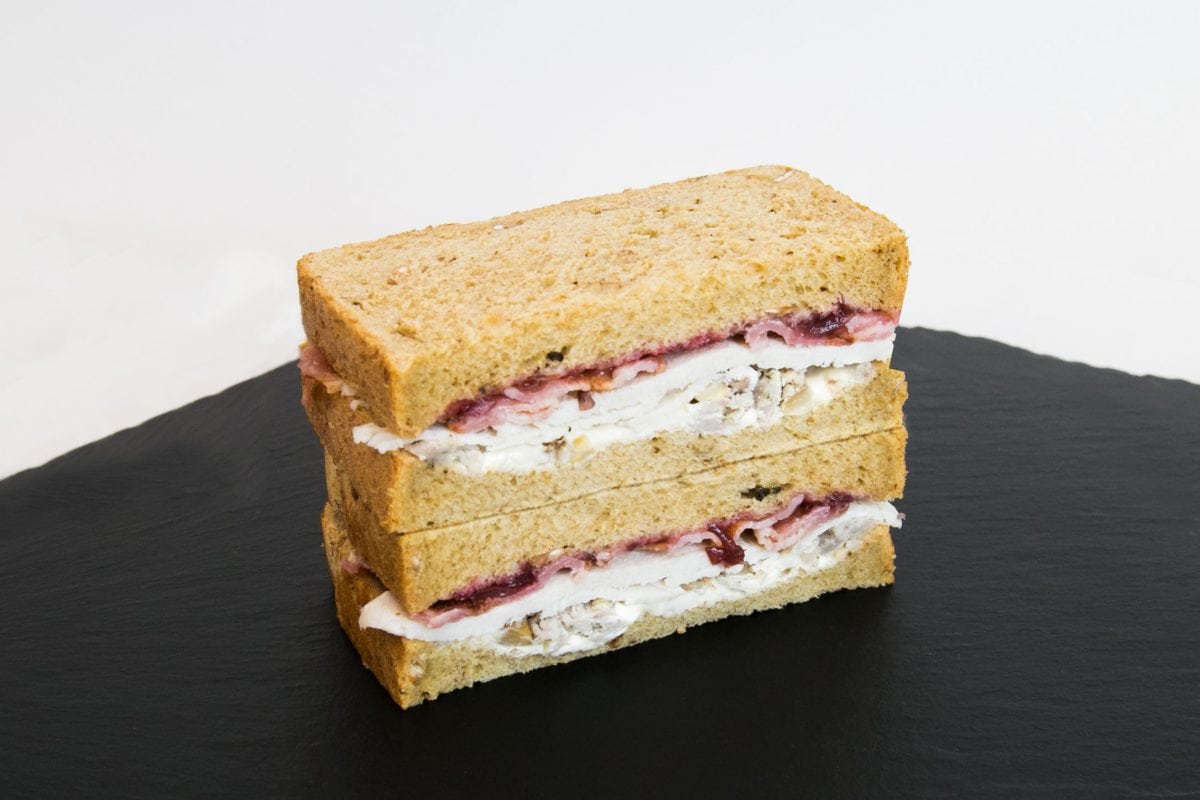 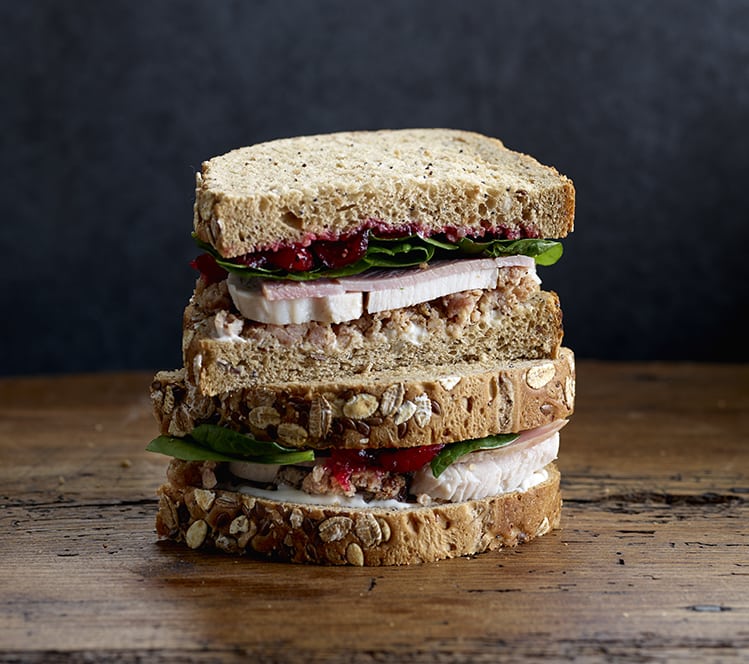 Joy to the world, EAT’s Full Works Bloomer is an absolute triumph. An improvement on last year, thick sliced turkey is butter basted and succulent; prune and pancetta stuffing is sweet-salty, complemented by slices of smoked ham and “hand-crumbed” pork. Elsewhere, the bread is thick and substantial, spinach adds crunch and the cranberry sauce is completely unbothered by an overzealous blender. Bravo!