Having changed TV forever, The Sopranos is so much more than just a mob drama.

by Jon Hatchman
in Film, Food and Drink, TV 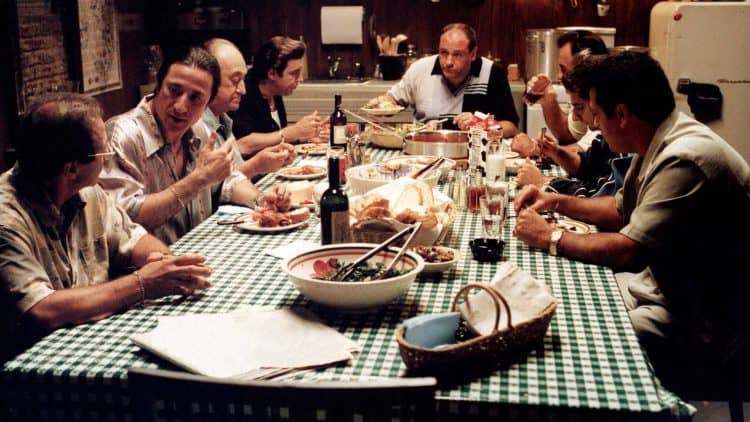 Almost 15 years after that iconic cut-to-black ending, a prequel to The Sopranos has finally been released in cinemas. Documenting “one of the most tumultuous eras in Newark’s history”, The Many Saints of Newark sheds light on younger versions of the series’ characters, including the rise of a teenage Tony Soprano played by James Gandolfini’s own son, Michael Gandolfini.

The film follows the meteoric success of The Sopranos, with six seasons having run from January 1999 to June 2007. From the end of the pilot, we all knew the show would be a roaring success, but at the time it would’ve been impossible to predict the show’s seismic impact.

Creator David Chase initially hated the medium of television, hoping to break into feature films. The Sopranos was initially conceived as a modern mob movie, but Chase couldn’t quite make the leap. Chase’s manager instead urged him to consider writing the show as a TV series for HBO, a pay-cable network at the time known for showing movies and pay-per-view sports. HBO has presented a huge collection of outstanding TV series since the turn of the millennium (Breaking Bad, Mad Men, The Wire, Game of Thrones, et al.) but none would have been the same without The Sopranos.

In addition to changing television forever, The Sopranos has also had a monumental cultural impact, from fashion to 21st century angst, to playing a pivotal role in encouraging men to speak about mental health. And although widely regarded as a series about the mob, it’s so much more than that. It’s the story of a suburban New Jersey gangster and the complicated interaction between his professional life and family life. Thematically, family is a crucial pillar – whether Tony Soprano’s actual family, or his New Jersey crime ‘family’ – and it’s no secret that food is the cornerstone of so many Italian and Italian-American families. It’s also the modality by which Tony’s personal and professional relationships are created and maintained.

Almost a character in its own right, food plays an important supporting role from the first episode where Anthony Junior memorably laments over “no fucking ziti”, to Paulie and Chrissy’s frozen relish, Gloria’s hurled London broil, and Carmella’s Sunday dinners; all the way through to the onion rings ordered at Holsten’s in the final scene.

While viewers in Italy weren’t always particularly keen on The Sopranos, the show has introduced countless non-Italian communities to a wide range of dishes, techniques, and traditions. The Italian distaste is playfully touched upon during the second season, when Tony visits Naples with Paulie and Christopher. At a formal dinner, the Italian-American characters are considered “classless pieces of shit” when Paulie orders a simple dish of “macaroni and gravy”.

On the other hand, Italian delicatessens around the world are particularly indebted to the impact of The Sopranos, with cured meats or cold cuts having been such a recurring theme. It’s no secret that meat plays a crucial supporting role in The Sopranos, featuring in so many scenes and conversations. Most prominently, the show introduced millions of viewers to the likes of capicola, affectionately known as ‘gabagool’.

Research suggests the term ‘gabagool’ is a dialectic bastardisation. Given many Italians in the United States descend from Southern Italy, the term is likely derived from a combination of dropped end vowels, amplified “ohs”, and “voiced” consonants altering the ‘C’ sounds to ‘G’ sounds.

A type of cured meat, capicola is salt-cured and seasoned with a variety of flavours such as garlic and paprika before being hung to cure for around six months. Using the muscle running from the neck to the fourth or fifth rib of the pork shoulder or neck, the texture is waxier than say mortadella but the intramuscular fat brings an intense wave of flavour alongside generous seasoning. It also works perfectly in sandwiches alongside provolone and pickled green peppers: a favourite of Tony Soprano’s at Satriale’s – the pork store that’s home to his office.

When Tony isn’t eating at Satriale’s, or at restaurants such as Nuovo Vesuvio owned by his long term friend Artie Bucco (as expanded upon in the film), home cooking plays an unsurprisingly vital role in The Sopranos.

As far as outdoor cooking is concerned, the barbecue is very much Tony’s domain. Let’s not forget we still live in a very sexist world. It’s a primitive reminder of the protagonist’s often toxic masculinity, though his fictional barbecue skills seem very much on point. Charcoal is always used as a fuel, and Italian sausages are a particular specialty. We also see a patriarchal side to Tony when he’s hunched around the grill, offering pointers and words of wisdom to younger characters coping quite well without his input.

Most of the home cooking is carried out by Carmella Soprano, however – a character whose input and impact is undervalued when looking back on the show. Take away the materialism that drives much of Carmella’s character, she’s an adoring mother, extremely patient wife, and an exceptional host. During the early series, three generations of Sopranos are seen enjoying Sunday dinners around the family dining table. Carmella’s recipes are also referenced throughout the series, from her lasagne with sweet sausage and basil leaves under the cheese, to her ricotta pie used as a threat to help her daughter Meadow’s university application.

Published in 2002, during the height of the show’s success, The Sopranos Family Cookbook: As Compiled by Artie Bucco contains 100 recipes. Like the show, the book has also received some newfound popularity throughout various stages of lockdown. Although not actually compiled by John Ventimiglia’s character, the recipes are broadly Italian-American or influenced by the cuisine of Southern Italy. Here, each chapter is introduced by a character from The Sopranos, while fictional dishes inspired by certain characters sit alongside those actually referenced or enjoyed through the six seasons.

From the ‘Sunday Dinner’ chapter, the standing rib roast from Tony’s flashback is joined by the likes of manicotti, or cavatelli pasta shells with either Neapolitan ‘Sunday gravy’ or marinara sauce (‘gravy’). Meadow’s beloved chicken cacciatore also features in the book, as does Vito’s pork chops with vinegar peppers, plus a baked ziti such as the one famously prepared by Bobby Baccalieri’s late wife, Karen.

Referenced in various guises throughout the show’s run, the baked ziti’s circumstances are far more sombre than most of the other dishes featured. In the show, Bobby continues to mourn the loss of his wife, finding himself bombarded with meals from the other mob wives, as a show of support. After weeks of putting it off, Bobby is finally manipulated into eating the final baked ziti made by Karen, stored in the freezer as a touching memorial, forcing him to deal with his grief and to move on. As well as being deeply relatable, it’s a difficult watch for anybody who’s lost somebody they love, realising that person will never cook their favourite meal again.

Through all of its violence, corruption and other unpleasant scenes, The Sopranos is littered with these touching moments, often pulling on viewers’ heart strings. The majority of which take place at the dining table, whether at home or at restaurants. There’s the season one finale at Vesuvio, when the Sopranos are caught in a storm and they end up eating by candlelight. “Someday soon, you’re going to have families of your own,” proclaims James Gandolfini. “And if you’re lucky, you’ll remember the little moments, like this… that were good.”

Another similar scene takes place in the first season when Tony takes Meadow to dinner in Maine while visiting prospective universities. The pair visit a restaurant alone, with Tony very conscious of the fact that Meadow will soon fly the nest along with his beloved ducks. Then, of course, there’s the final scene.

All is seemingly well in New Jersey, as Tony sits down in a booth seat at Holsten’s diner. Journey’s Don’t Stop Believing plays on the jukebox and Carmela and Anthony Junior soon join him. While waiting for Meadow to arrive, Tony orders a basket of onion rings for the table. To many, they’re just onion rings. They’re unimportant. But they’re also the last food seen onscreen before that iconic finale, leaving viewers to choose Mr Soprano’s fate for themselves. The onion rings are the centrepiece on the table of one of the show’s many, many meals. One of the aforementioned “little things”, which seem so insignificant but also contribute so prolifically to food’s supporting role in the greatest television show of all time.

RELATED: How To Make: Spaghetti & Meatballs