At a meeting in New York, the Amazon founder said it was up to governments to set taxation frameworks. 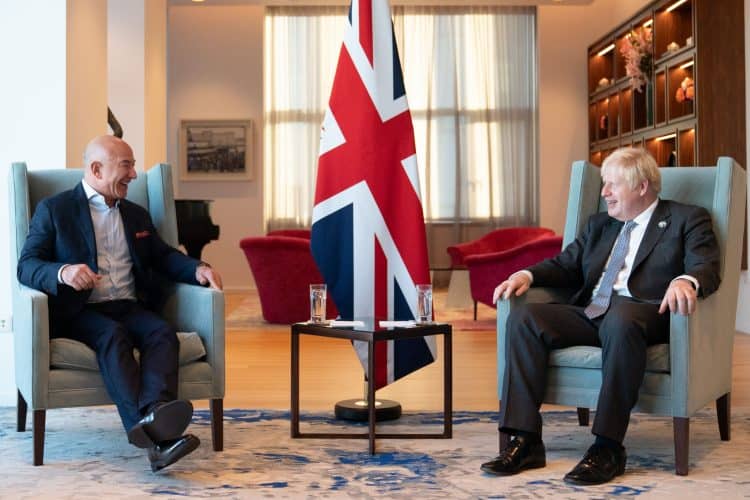 It is the government’s job to force Amazon to pay more tax, Jeff Bezos has told Boris Johnson in New York.

The prime minister met the Amazon founder – one of the richest men on the planet – on the sidelines of the United Nations general assembly on Monday.

Johnson said revealed he urged the boss of the online giant that he must ensure a fair share is paid in the UK – but accepted he will not pay tax as “an act of kindness”.

“What I did say to him was that we in the UK feel very strongly that the internet giants need to be making their fair share of contribution in tax,” Johnson told ITN.

“When you sell many many billions worth of goods in the UK then you’ve got to expect to be taxed fairly in the UK.”

Asked how Bezos responded, Johnson told Channel 5 News: “He’s a capitalist and he made the very important point that this is a job for governments.

“And tax isn’t something that he’s going to pay as an ex-gratia act of kindness. It’s up to governments to come up with the right framework.”

Questioned whether Bezos accepted that Amazon was not paying enough tax in the UK, Johnson added: “This is a guy who’s making … he has to operate within the commercial framework, within the laws as he finds. That’s what he does.

“We’re trying to make sure we change so as to be fair to the taxpayer, fair to other businesses in the high street and elsewhere.”

The prime minister said the Amazon boss “has to operate within the commercial framework, within the laws” in place when asked if he gets the sense Bezos accepts he pays too little tax.

Amazon sales in the UK soared by 51 per cent to almost £20 billion last year, buoyed by coronavirus lockdown restrictions.

Despite the boom, estimates have put Amazon as having a tax-to-turnover ratio of just 0.37 per cent.

At a summit earlier this year, hosted by Chancellor Rishi Sunak, G7 countries agreed to set a global minimum corporate tax rate of 15 per cent in an effort to stop tech giants avoiding tax.

But Amazon could be excluded from the list of companies impacted, because its profit margins are lower than the 10 per cent threshold for inclusion – although officials are seeking to “carve in” the company to the final deal.