Occupying one of the most beautiful rooms in sketch, The Glade has reopened, serving a new vegetable-based lunch menu conceived by chef Pierre Gagnaire. 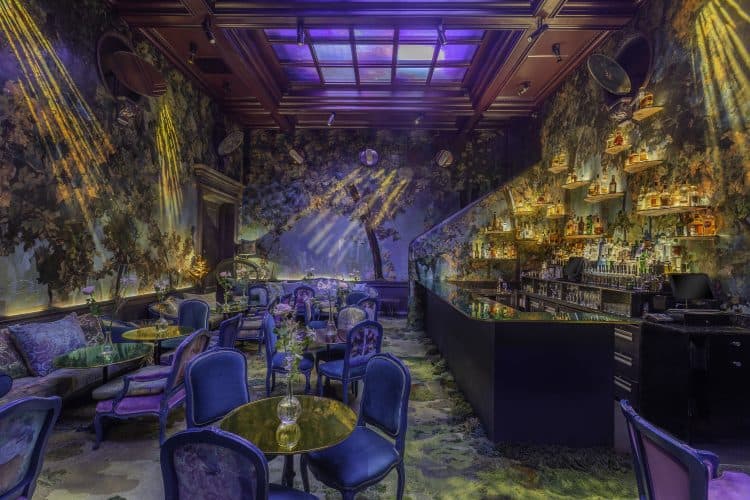 Having reopened in May, after almost six months of forced closure due to the ongoing effects of the Covid-19 pandemic, sketch has introduced a new vegetable-based ‘Garden Menu’, served in The Glade restaurant and bar.

First opened in 2002, by restaurateur Mourad Mazouz and three-Michelin-starred chef Pierre Gagnaire, sketch occupies the former headquarters of the Royal Institute of British Architects before later becoming the London Atelier of Christian Dior. Set over multiple floors, the space is home to a number of restaurants and bars, including the Lecture Room & Library, the Parlour, the East Bar, the Gallery, the Glade, and – of course – those famous toilets. Redesigned in 2017, The Glade occupies one of the most beautiful rooms within sketch. Re-imagined as a mythical forest, the space has a deep, fluffy carpet designed to evoke a forest floor, paper trees, a stained glass ceiling, and velvet seating. The room has clearly been designed with painstaking attention to detail, just like the food. Yet while it’s certainly a fine dining restaurant, lunch isn’t superfluously fussy; it’s actually quite relaxed, aided by service that’s polished yet particularly charming.

Having used the third national lockdown as an opportunity to reflect and experiment, Pierre Gagnaire conceived the new Garden Menu in response to guests’ increasing desire for vegetable-based dishes to be in the foreground of the restaurant’s menus, executed by Executive Chef Frédéric Don. In addition to the new menu, Wine Director Frederic Brugues has reshuffled the restaurant’s still and sparkling wine list to include some of the finest English wines, working directly with various vineyards and producers to bring the wine directly from farm-to-glass, ultimately supporting family-run and small businesses.

As for the food served, the Garden Menu is as creative as we’ve come to expect from sketch over the past two decades, and although it’s vegetable-based, it’s certainly not solely aimed at those following a plant-based diet. With the set menu offering either two or three courses, with a generous selection of dishes for each course, seasonality is a particular focus here, with exceptional produce showcased.

A recent lunch began with a substantial slice of tart, featuring spears of green asparagus and a gorgeous base spiked with ground almonds and pistachios, working exceptionally well with the asparagus. A salad of raw asparagus shavings joined the tart, dressed with olive oil and garnished with just a suggestion of tarragon. Even better was a salad of poivrade artichokes served raw under a blizzard of parmesan shavings, embellished with pine nuts and a whisper of mint, finished with a good drizzle of olive oil. Although seemingly simple, the dish was an exercise in showcasing both remarkable produce and considered attention to detail, resulting in perfect balance of complementary flavours.

Often overlooked in restaurants, or considered unexciting, The Glade’s soup favoured chilled petit pois with verbena bringing even more freshness to the dish’s slight sweetness, bolstered even further by a rocher of subtle sweetcorn ice-cream and popcorn in place of croutons. An absolutely inspired starter. For mains, Cévennes onion was served en cocotte and celebrated alongside daikon braised in blond beer and lentils in a creamy sauce ‘perfumed’ with juniper. A generous portion of spelt risotto, on the other hand, was cooked al dente with a ‘veil’ of Balvenie whisky, which sounded interesting but wasn’t potent enough to stand out against the otherwise perfect poached egg cooked in a water bath at 67 degrees-celsius to produce a runny yolk whose richness completely transformed the dish.

With dessert, the sketch kitchen’s creativity is showcased further, with three small dishes available to share between two people. Of the three, a Kentish strawberry and Yorkshire rhubarb fruit salad in syrup was served in a coupe glass, capped with a sharp Campari and burrata ice cream. Best of all, rhubarb featured once more in a fondue, topped with vanilla crumble as a play on what’s arguably one of the best British desserts of all time, while a Guanaja chocolate mousse was remarkably decadent, accompanied by buckwheat praline and Caraïbes chocolate water ganache, enough to sate any chocolate lover.

The Glade at sketch can be found at 9 Conduit Street, London, W1S 2XG.