One of London’s smartest hotels, The Ned was greeted with sonic hysteria when it took over the Sir Edwin Lutyens-designed former Midland Bank HQ last year. A playboy’s playground in the heart of the Square Mile, Soho House’s landed cruise ship is spread across eight storeys, with 250 hotel rooms, a private members’ club, a […] 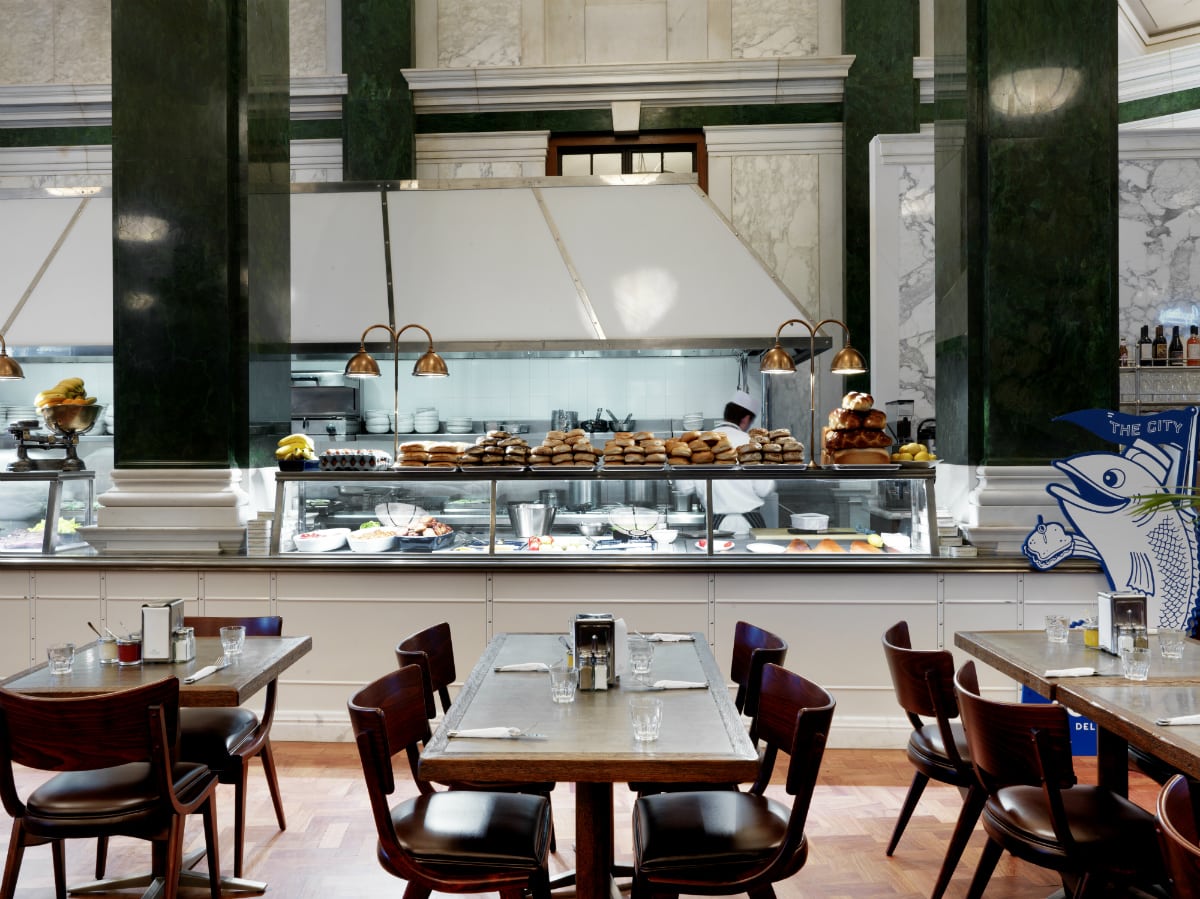 One of London’s smartest hotels, The Ned was greeted with sonic hysteria when it took over the Sir Edwin Lutyens-designed former Midland Bank HQ last year. A playboy’s playground in the heart of the Square Mile, Soho House’s landed cruise ship is spread across eight storeys, with 250 hotel rooms, a private members’ club, a spa and 10 restaurants. Joining the likes of Asian-Pacific Kaia, Malibu Kitchen and a branch of Cecconi’s, Zobler’s Deli & Diner is, perhaps, the hotel’s most accessible dining option.

Inspired by Jewish delis that operate throughout New York, Zobler’s is furnished in a manner that conforms to the architectural style of the building’s £200 million refurbishment. Rich green columns stretch from the chequer-board floor tiles to the vaulted ceilings; a thick marble counter that circles the space’s perimeter is joined by plush red leather bar stools. The open kitchen is surrounded by a counter flaunting various bagels, smoked meats and fish.

Open for breakfast, lunch and dinner, Zobler’s is a casual space with fast, informal service. From the relatively concise all-day menu, dinner begins with a round of classic Negronis and a plate of fries loaded with slivers of pastrami – boasting a spicy crust and plenty of smokiness – plus heaps of molten cheese (£6). Smoked salmon soldier (£5) is a tower of crisp, fried bread, thick wedges of salmon smoked in-house, Dijon mustard-spiked mayonnaise and marbles of trout roe. Both dishes set the bar for the stodgy, heart-warming comfort food championed: an essential cog in the operation of Zobler’s Deli & Diner.

‘The Beefeater Strikes Back’ (£15) has a combination not dissimilar to the fries’ topping yet features boiled corned beef instead of pastrami. Although the corned beef is less flavoursome than the smoked, crusted pastrami, the texture is soft and unctuous. Here, hunks of corned beef are served on a bed of crispy latkes (fried potato cakes made with shredded potato, flour, egg and onion). In addition, oodles of melted cheddar also top the latkes, alongside caramelised onions and lashings of gravy.

Zobler’s Reuben (£11), on the other hand, is the restaurant’s take on a bona fide classic. A thick layer of corned beef slices is towered high and sandwiched between slices of toasted rye bread alongside acidic sauerkraut and melted Swiss cheese. Although refined, the beef lacks the soft fat – a fundamental contributor to the original’s outstanding reputation. Generous wedges of pickled gherkin, served on the side, are a welcome addition, nonetheless.

Of various desserts, a “Black & White” cookie (£1) is a yin-yang symbol of dark and white chocolate which coats a disagreeably soft biscuit – like traditional gingerbread, but without enough flavour to compensate for the unforgiving texture. Far better is the classic banana split (£4), available with a choice of toppings. After bickering like bratty siblings, we agree on Maltesers, wafers and chocolate fudge sauce. (Salted caramel has absolutely no place on a banana split). Another classic, the banana split is completely devoid of wanton flummery; just vanilla ice cream and the aforementioned toppings. Like most of the food served at Zobler’s, this is humble comfort food at its absolute best.