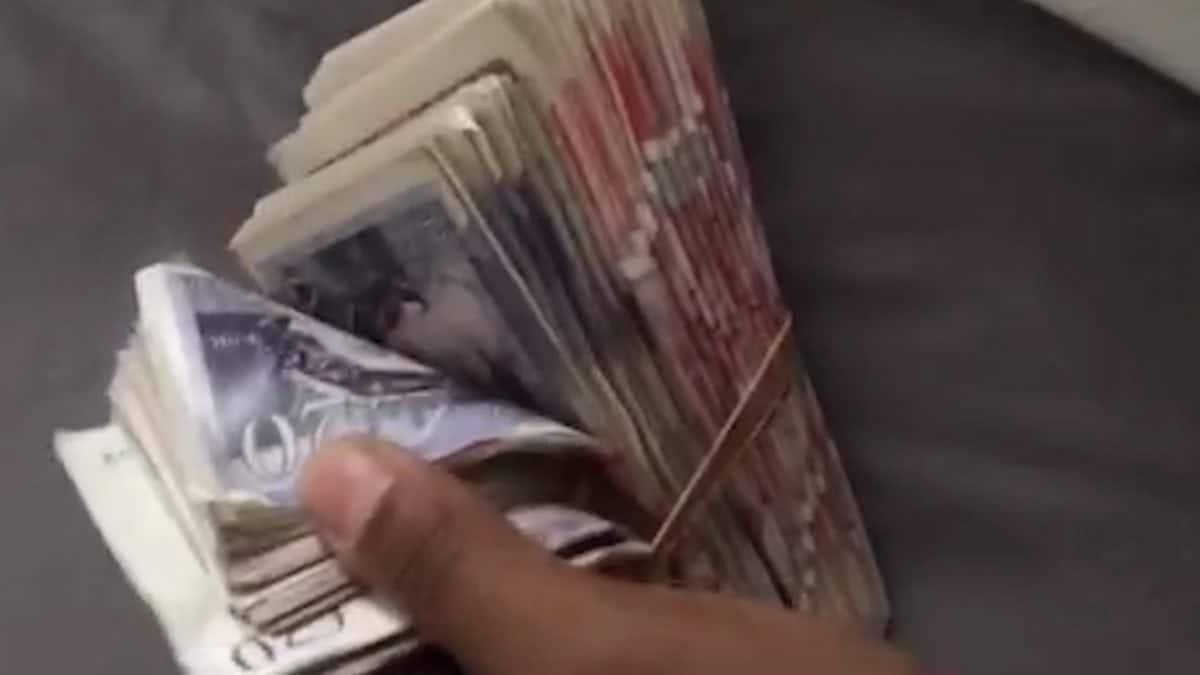 A fraudster who conned pensioners out of thousands of pounds by pretending to be a policeman made a video of himself with wads of cash, luxury watches and designer clothes.

Hamza Ali, was filmed lying on bed counting wads of mostly £50 notes before flicking through the bundle which is at least four inch thick.

He also filmed himself wearing one luxury watch while zooming in on the price tag of a £25,550 Rolex watch next to another watch and garish designer clothes laid out on his bed.

The 23-year-old posed as a Scotland Yard detective for over five months as he rang at least 26 victims to trick them into withdrawing money or getting together their jewellery so they can be collected by a courier.

His last victim was a pensioner in her 70s in Sittingbourne, Kent, who was almost conned out of £20,000 of jewellery along with her debit card.

She had received a call from Ali on 23 October last year who told her to place her belongings in a plastic bag and leave it outside her door for an officer to collect.

A few days later, he called again to authorise two payments as part of the investigation when he was actually in a shop buying trainers.

But he was caught when the elderly woman alerted police to the scam and he was arrested at Luton airport after taking a friend on an all-expenses-paid trip to Italy.

And Dujane Mezu, 20, was caught pretending to be a courier acting on behalf of the police when an 80-year-old woman realised it was a ruse and went to police.

She called by someone claiming to be an officer from New Scotland Yard who said there was an issue with her bank.

So she went to Sittingbourne police station and officers accompanied her back to her house and arrested Mezu when he arrived at the property on October 3 last year.

Ali of Gladstone Park Gardens, London, was jailed for five years after admitting conspiracy to commit fraud at Maidstone Crown Court on Monday

Mezu of Grosvenor Avenue, London, admitted going to three addresses across Kent and telling the victim he was there to collect money on behalf of the police

He was jailed for a year for conspiracy to commit fraud and an extra five months for beaching a suspended sentence for a previous offence.

Detective Inspector Annie Clayton said: “These men preyed on elderly people for their own financial gain.

“They each played a key part in pursuing and defrauding a number of vulnerable people across Kent.

“They showed no remorse for their involvement or the effect their actions had.
“The impact this type of crime has on victims is significant, often leaving them devastated by their financial loss.

“I hope that those targeted by Ali and Mezu can now take comfort in the knowledge that these men have been sentenced and brought to justice.”

“Hamza Ali was part of a group of individuals who assumed that their victims’ perceived vulnerabilities would make them more susceptible to their crimes.

“Due to the 26 victims coming forward to give evidence against him and others, and a thorough investigation by Kent Police, we were able to put together a strong case to present to the jury.

”Most significantly, footage of Ali making a similar fraudulent telephone call was discovered, and that, combined with telephone and banking evidence, made for a compelling case against him.”

Courier fraud is the name given to incidents where fraudsters attempt to trick victims into withdrawing sums of money with the intention of sending a courier to collect it from them.

The scam usually works by the fraudster claiming their bank accounts have been hacked and money needed to be taken out for safekeeping or items were needed as evidence.

Kent Police stressed no police officers will ever ask a member of the public to withdraw cash or send a courier to collect money or items from them.