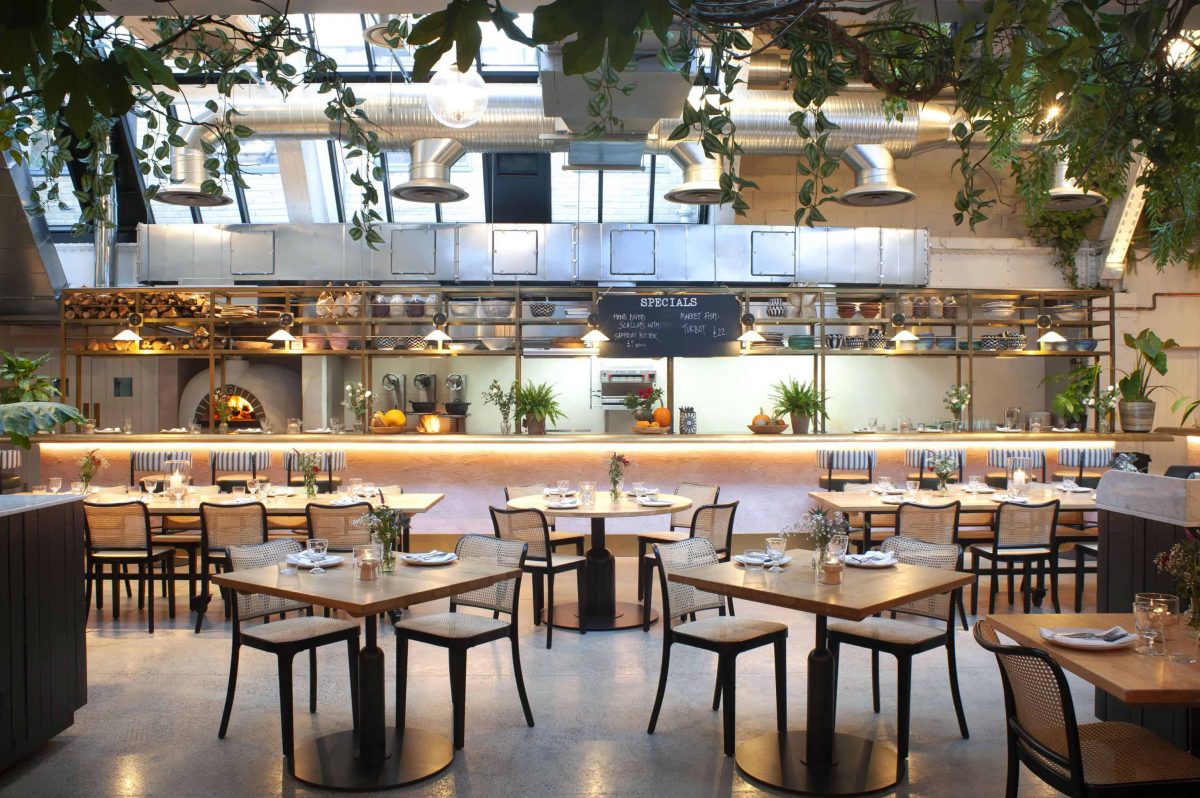 A backstreet near Victoria Coach Station seems an unusual location to open a serious restaurant. But it’s a cold Thursday evening in January, and Wild by Tart is almost full.

The flagship opening in the Grosvenor’s new Eccleston Yards development, Wild by Tart joins a branch of Barry’s Gym and The Jones Family Kitchen. A multi-purpose space, Wild by Tart occupies a former Victorian power station and coal store, home to a take-away deli, all-day café, a neighbourhood restaurant, retail space, and a photography studio – launched by Jemima Jones and Lucy Carr-Ellison, alongside Tom Warren, founder of Lock Studios.

Having met on a fashion shoot as model and photographer, Lucy Carr-Ellison and Jemima Jones bonded over a passion for food, eventually setting up a catering company, Tart London, in 2012. Specifically targeting the fashion industry, the successful catering company also led to an Evening Standard recipe column and a cook book.

Inside, the 9,000 square-foot space has many of its original fixtures, including a high glass-panelled ceiling and an arched roof. Elsewhere, wooden tables are joined by comfortable seats and sympathetic lighting that’s a significant departure from the chaos of weekends at Victoria Coach Station.

As for the food, Lucy and Jemima’s love of travel is reflected, with nods towards the Middle East, South America and Europe, with a particular emphasis on locally-sourced produce. Much of the meat, veg, and honey is sourced from Jemima’s family farm in Northumberland, while British mozzarella and halloumi are also championed throughout.

Dinner began with a prettily presented pickle plate, featuring cauliflower florets, plus hunks of radish, carrot, and cucumber preserved in a well-balanced pickling liquor, garnished with micro coriander. Elsewhere, mushroom and cheese croquettes were exemplary: comfort food at its best. Lurid green winter maltagliati was slightly thick but well-cooked, all the same, amplified by some cavolo nero, brackish anchovies, smashed hazelnuts and just a whisper of tarragon. Trout crudo was a particular highlight, harbouring slivers of unmistakably high quality fish piled over a mote of green tiger’s milk, embellished with some pureed avocado, jalapeño and crisped corn for textural depth, in addition to the accompanying crackers.

‘From the wood oven’, a coal-roasted leek pizzetta was another highlight, loaded with a white base, garlic toum, rainbow chard and a dusting of grated manchego. Also from the wood oven, large wedges of pumpkin were roasted until the skin had softened; the sweet flesh contrasted by some treacle kale, crumbled feta, and lightly pickled onion petals; plus an orange and hazelnut gremolata. Another accomplished vegetarian dish.

A special of sea bass featured a deftly-cooked fillet simply garnished with a melange of capers, shallot, parsley and butter – delightful with a side of slightly smoky beans studdedwith herbs, roasted tomatoes and a drizzle of tarragon oil. Charred Hispi cabbage, on the other hand, was yet another example of the restaurant’s excellent vegetarian cooking, though the accompanying smoked hollandaise delivered good flavour, it quickly began to resembled scrambled eggs, tainted by the hot plate.

Desserts at Wild by Tart are particularly glorious, perhaps unsurprisingly. A gluten-free Seville orange and cardamom cake was unusually light, crowned with Cointreau-soaked blood orange segments, crumbed pistachio and a rocher of crème fraiche. Even better, however, was a coconut rice pudding served with a sweet, slightly umami sesame tuille and spears of tart, confit rhubarb. An absolute triumph.

Wild by Tart can be found at 3-4 Eccleston Yards, London, SW1W 9AZ.