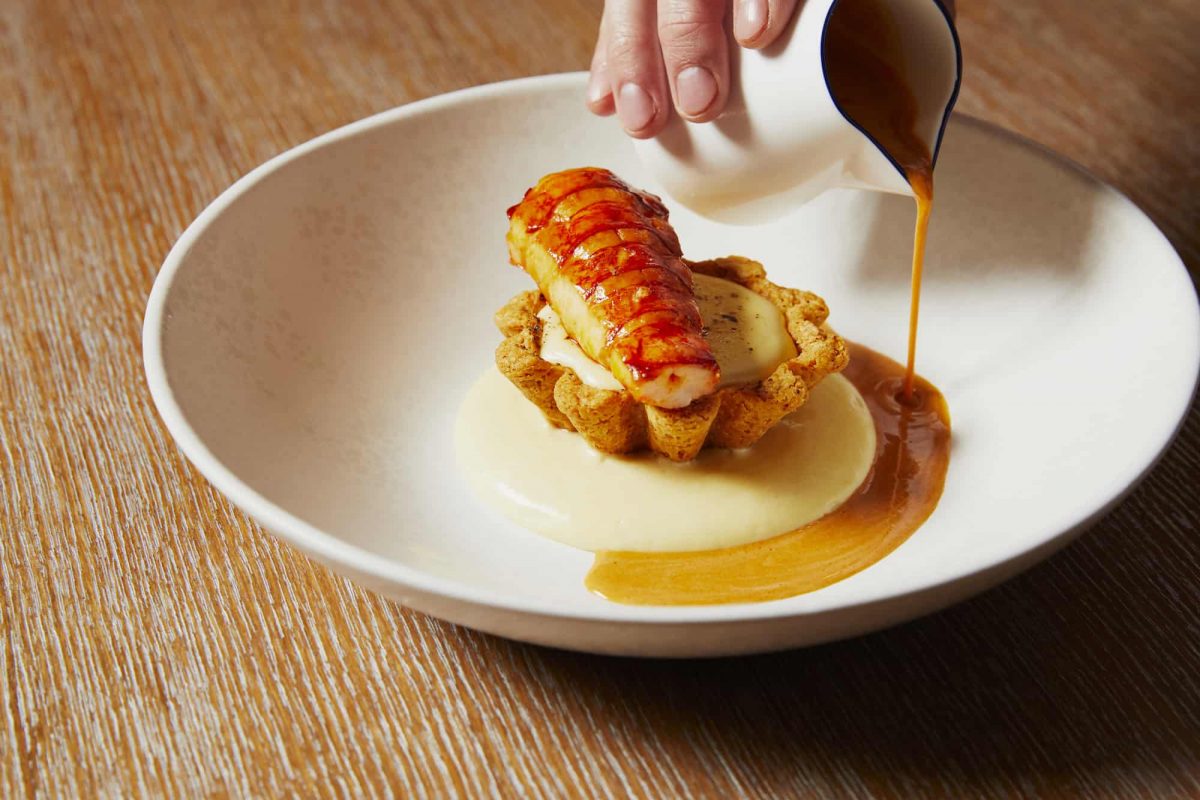 An old guard of luxury hospitality, The Dorchester Hotel has relaunched The Grill with its youngest ever Head Chef, Tom Booton.

One of the hotel’s flagship restaurants, joining Alain Ducasse’s three Michelin starred London restaurant and China Tang, The Grill has seen a complete renovation, located on the hotel’s ground-floor and accessed via the main lobby. Alongside the introduction of a specific pudding bar, the restaurant has a distinct retro luxury feel. The room is comfortable, with its plush leather seating and warm lighting, while strategically placed mirrors strive to compensate for the complete lack of natural light – yet could still do with being dragged even further into the 21st century. Fortunately the excellent service helps (efficient but not overbearingly formal), as does Head Chef Tom Booton’s series of new set menus.

Just 26-years-old when the restaurant reopened at the end of last year, the Essex-born chef began his career with work experience and a subsequent weekend job at Le Talbooth near Colchester. Later, Booton eventually went on to work in kitchens of restaurants such as L’Autre Pied and Dabbous, before most recently working as Head Chef for Alyn Williams at The Westbury, before the hotel dismissed Williams, continuing to operate the restaurant with the chef’s name.

At The Grill, Booton is challenging public perception of the tired grill restaurant: updating the rule book rather than tearing it up entirely. Here, British produce is championed throughout a parade of dishes showcasing modern, playful riffs on grill restaurant classics, embellished with some classically French fine dining technique but without the wanton flummery synonymous with so many luxury hotel restaurants. Unlike most hotel restaurants of this calibre, the food menu is relatively accessible, with the lunch set menu starting at £23. Dinner is priced at £60 for three courses, and £75 for four, minus supplements. The wine list mark ups are quite high, however.

The prelude to a recent dinner, stout bread was made in-house, warm and slightly sweet – a remarkable accompaniment for the freshly churned butter and almighty addition of soft, spreadable black pudding. Canapes of chicken liver parfait piped into brik pastry casings were also of note: delicate but boasting tremendous depth of flavour. To follow, a superlative Scotch egg featured a perfectly-cooked quail’s egg, snuggled my minced prawn in place of sausage meat, cloaked with light breadcrumbs and served over a pool of warm tartar sauce rampant with diced gherkins. Another hero dish – veal sweetbread was cooked with precision and draped with paper-thin slices of earthy celeriac, amplified by some maitake (‘hen of the woods’) mushrooms and lentils. A dish of exceptional balance.

Even better was a lobster thermidor tart (£20 supplement). A dish that will, no doubt, become one of The Grill’s signature dishes, the tart is capped with a generously-sized, blushing lobster tail, though it’s the pastry and tart filling that’s most endearing. Ensnared by short, crumbly pastry, the tart was filled with a mixture of Cheddar and more caramelised maitake mushrooms, capped with a lobster thermidor foam, which harboured unexpected depth of flavour; all resting on a sauce of decadent lobster bisque. Another generously proportioned main featured two thick Herdwick lamb cutlets, cooked rare (as requested) with properly rendered fat, simply served with a quenelle of the kitchen’s play on ratatouille, and olive tapenade. On the side, however, pommes boulangère were the jewel in the dish’s proverbial crown, rampant with delicious, slightly aged lamb’s fat.

To finish, a new statement ‘Pudding Bar’ has been introduced, with six seats intending to bring some theatre to the overall experience – where guests can watch pastry chefs prepare their desserts. Highlights included rhubarb and custard soft serve ice cream, studded with nuggets of poached rhubarb and tarragon leaves, served with doughnuts; and the “Double Decker” – a loving play on Booton’s favourite chocolate bar, comprising chocolate-coated Rice Krispies, dense nougat, and a rocher of malted milk ice cream. An absolute revelation, ideally accompanied by a cup of Difference Coffee’s Jamaica Blue Mountain, for an added touch of five-star hotel opulence.

With the restaurant’s reshuffle and Tom Booton’s new menu, The Grill at The Dorchester has genuine potential to become a destination restaurant in its own right: not just one of God’s waiting rooms for leathery septuagenarian plutocrats, hotel guests, or both.

The Grill at The Dorchester can be found at 53 Park Lane, London, W1K 1QA.