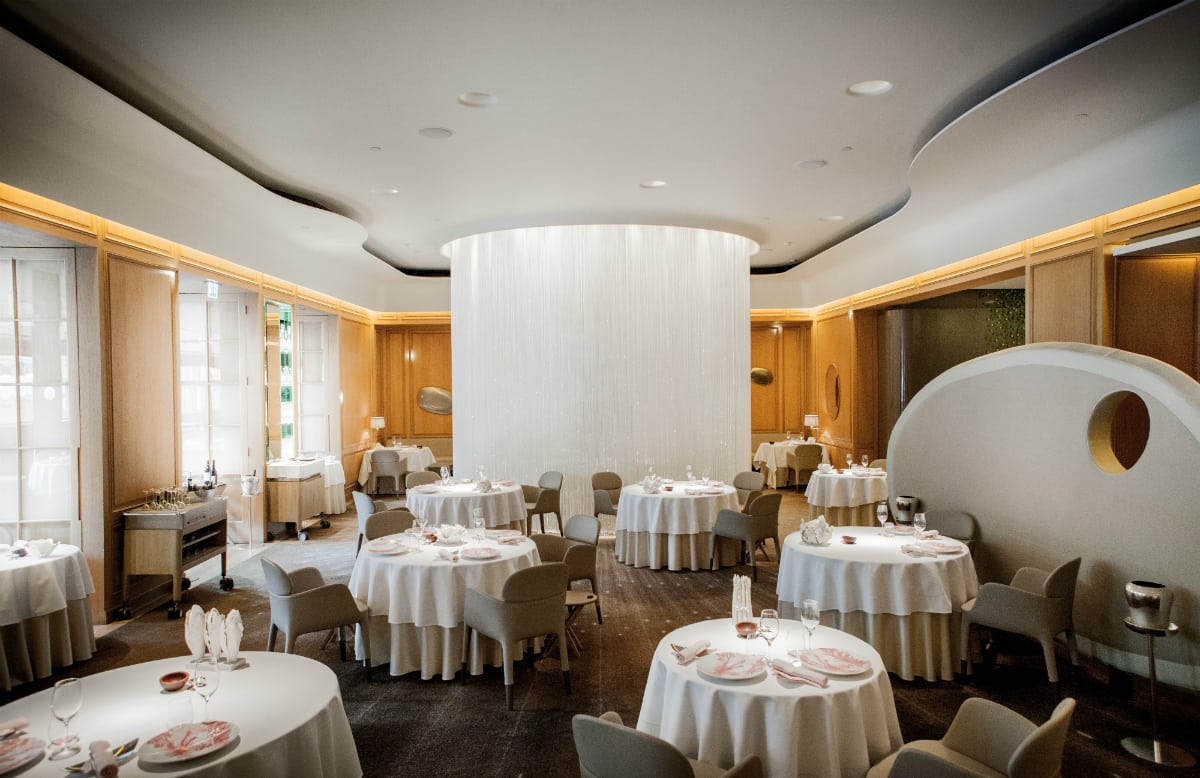 Deep within The Dorchester, one of the world’s most prestigious hotels, Alain Ducasse’s flagship UK restaurant opened in 2007 and has held three Michelin stars since 2010. One of just three restaurants in London to hold such a coveted accolade, this is one of the best restaurants in the country (if not the world); if the Michelin guide is anything to go by. The restaurant has since remained a temple of extravagant fine dining. In the kitchen, the brigade of more than 20 chefs is currently lead by Executive Chef Jean-Philippe Blondet, who designed the special Goût de France tasting menu.

To be frank, dinner here is not cheap. Matched with expert wine pairings, the six-course Goût de France menu was priced at £260 per person. The general a la carte menu costs £100 for three courses (£120 for four) and the seven-course tasting menu will set you back £140. Yes, it’s expensive, but the restaurant’s unwavering popularity since opening speaks volumes. Besides, so many are happy to pay through the nose for once in a lifetime experiences. How much hard earned cash would so many of us part with for the chance to have seen Hendrix at Woodstock? For Wimbledon finals centre court tickets? To watch Arsenal in the FA cup final (or for The Gunners to have at least made it to the fourth-round)? So why should dinner at one of the UK’s best restaurants be classed differently?

We arrived towards the beginning of dinner service, and the restaurant began to fill as the evening progressed, with a mixed crowd of suited businessmen, couples enjoying romantic dinners, the odd hotel guest and numerous die-hard foodies – discretely photographing everything brought to the table. During the evening, the atmosphere was sedate, the dining room quiet but not funereal, and the service – although very formal – surprisingly unstuffy. Whilst the restaurant employs a great number of front of house staff, all were unobtrusive, only coming to the table when absolutely necessary.

Dinner began with a melange of quintessentially French treats. A pyramid of gougères were unusually light; soldiers of brioche bread were topped with a slab of rich, slightly sweet foie gras terrine cloaked with a generous sliver of fresh black truffle; and confit frog’s legs were prepared with the meat scraped to one end of the bone, like meaty, marginally gamy, lollipops. Closely followed by a basket of numerous breads, which made its way around the table between courses, ‘V.G.E.’ truffle soup was the evening’s gastronomic highlight – even better with the accompanying Sancerre. Inspired by the legacy of Paul Bocuse, a crystal clear consommé of duck and chicken harboured dice of potato, leek and confit foie gras, crowned with a golden lid of exceptionally cooked puff pastry and another slice of black truffle. Eating the soup/pie creation, I wondered why all soup isn’t, by law, topped with pastry.

A tranche of turbot was technically perfect, cloaked with a thin sauce heavily redolent of chicken gravy. Elsewhere on the plate, a ribbon of paper-thin celeriac was draped over a concoction of charred leeks and sea urchin. Although contemporarily presented, the dish had a glorious, unrivalled sense of French classicism. Haute cuisine at its best. Similarly, a fillet of poached Bresse chicken (raised within a legally defined area of the historic former province of Bresse, in eastern France), was glazed with a defiantly traditional sauce containing more butter than Pound Cake. This was teamed with spears of asparagus, shredded spring onion, morel mushrooms and two discs of confit chicken leg, veiled with brittle skin not unlike Peking duck.

Two wedges of ripe, creamy Reblochon cheese followed, seeping like Salvador Dali’s melting clocks. These were served with a smackerel of modestly dressed salad and a breeze block of dense walnut bread, slightly sweet, texturally similar to Wedding cake. The cheese was the real cause for celebration, nonetheless; applauding produce untroubled by wanton ostentation. Finally, a chocolate dessert from La Manufacture de Chocolate Alain Ducasse in Paris: a dome of durable nutty chocolate was topped with aerated chocolate mousse, an edible chocolate leaf glittered with actual gold leaf (naturally) and joined by a rocher of chocolate sorbet. Modern in its presentation and execution, but categorically French in it’s technique and archetypal decadence – like just about everything eaten here. Technically, dinner at Alain Ducasse at The Dorchester is one of the best I’ve eaten.