Celebrating the best of Cornish produce, Siren joins The Dining Room at The Goring Hotel. 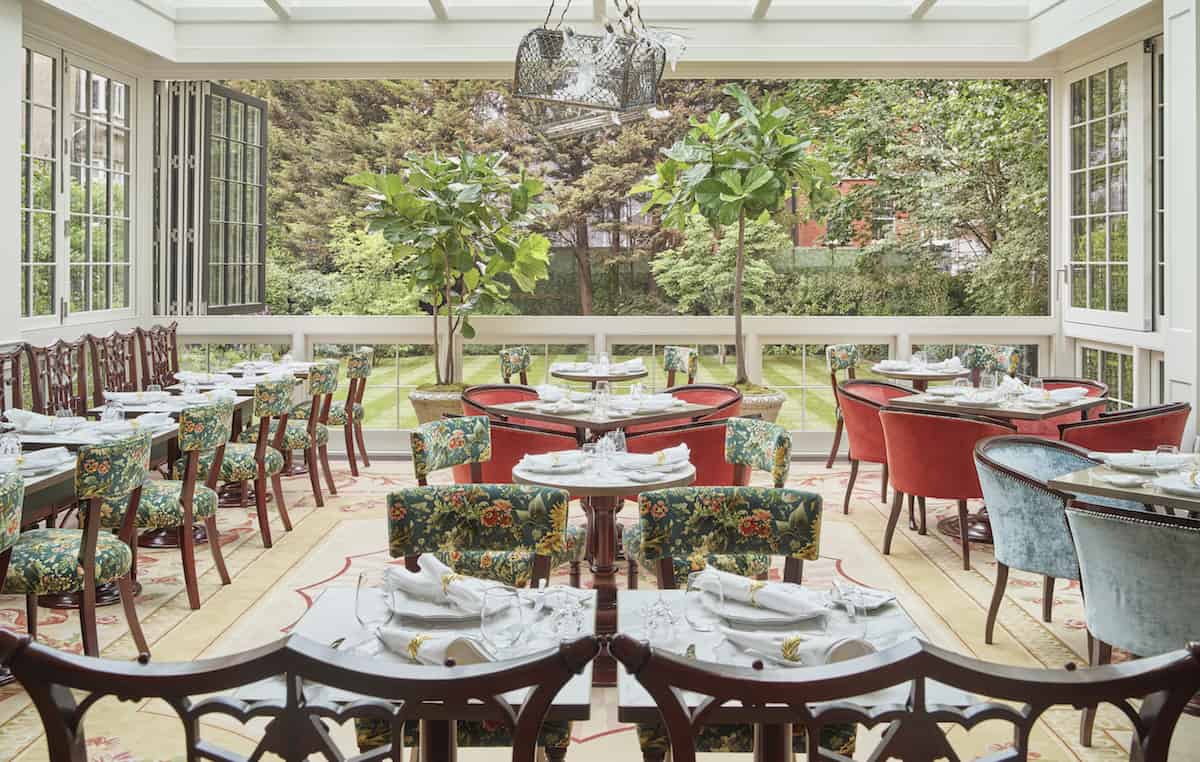 Named after the mythical creatures said to lure sailors with their enchanting music and dulcet tones, Siren is the first restaurant to open at The Goring in 109 years.

A collaboration between the Goring family and chef Nathan Outlaw, the restaurant has prominent Cornish leanings, drawing a link between the family’s and Outlaw’s connections to Cornwall. As such, it’s perhaps unsurprising that Siren champions fish and seafood, as is very much the case at the chef’s eponymous Port Isaac restaurant, currently holding two Michelin stars. For this new project within the Royals’ favourite hotel, Outlaw plans to split his time between London and Cornwall, overseeing things here for at least two days each week.

Part of a £4 million revamp to the hotel, Siren is accessed via the new, refurbished hotel bar, occupying a 60-cover space evocative of an airy conservatory, overlooking the hotel’s back garden. In the garden, approximately 150 different herbs have been planted by gardening and herb expert Jekka McVicar, each of which will be utilised in both cocktails from the bar and dishes from the restaurant menu. Elsewhere, the dining room is festooned with uncloaked marble table tops, comfortable velvet arm chairs or floral cushioned dining chairs, and chandeliers designed to reflect lobster pots, with glass lobsters clutching light bulbs. As expected from the venue and the high end menu, service is similarly elegant, with wait staff keen to discuss dishes and daily specials.

During the wait for our starters, a recent dinner began with a round of crusty bread supplemented with subtle seaweed-flecked butter, plus the most delectable whipped cod’s roe, finished with a pinch of smoked paprika. A generous portion of risotto embellished with sweet white crabmeat followed, with perfectly cooked rice joined by some spring onion, tomato and tarragon. The minutest squeeze of lemon would have been welcomed with open arms, however. A tart of lobster and pea puree was less remarkable. Though the peas were unmistakable fresh, strikingly verdant; and the short crust pastry boasted ideal thickness, the hunks of lobster were fridge cold and teetered on the threshold of being overcooked.

From the daily specials, presented at the table, the occasional inclusion of megrim sole is reason enough to celebrate, even though the wait between finishing our starters and the mains arriving triggered alarm bells. Considerably less popular than lemon and Dover sole, Cornwall’s surrounding waters are rampant with megrim, often thrown back by fishermen due to lack of demand. As such, the fish has a comparatively low price, is readily available and thus considered sustainable – a pressing matter in 2019. Here, the fish was well-cooked and served on the bone, simply finished with a butter-based sauce lavished with dill, samphire and capers, modestlycomplementing the fish’s firmer texture and taste that’s somewhat less refined than its cousins but still holds acquired value.

Siren’s luxurious take on fish and chips featured hake (another fish under-loved until quite recently), cloaked with craggy batter and deftly fried, served on a bed of warm tartare sauce sans chips. Instead of chips, ‘crispy potatoes’ were available as an additional extra, with a guise somewhere between chips and potato wedges: thick, hollow, so dry and overcooked they tasted as though they’d been sitting on the pass since the hotel opened in 1910. Far better was a strawberry tart, which eventually followed. Sweet, ripe strawberries were piled onto a rocher of lactic, slightly sweetened, yoghurt sorbet ensnared by a nest of refreshingly light filo pastry. A key example of the accomplished elegance from the kitchen at its most proficient.

Siren can be found at 15 Beeston Place, London, SW1W 0JW.