Stretching from the lower Rhône River to the Italian border, Provence’s regional cuisine is responsible for some of France’s best-loved, most internationally admired dishes. As a result of its Mediterranean climate, Provençal cuisine is deeply rooted in a trinity of olives (the king of Provençal cuisine), garlic and herbs de Provence: oregano, rosemary, thyme, savory, […] 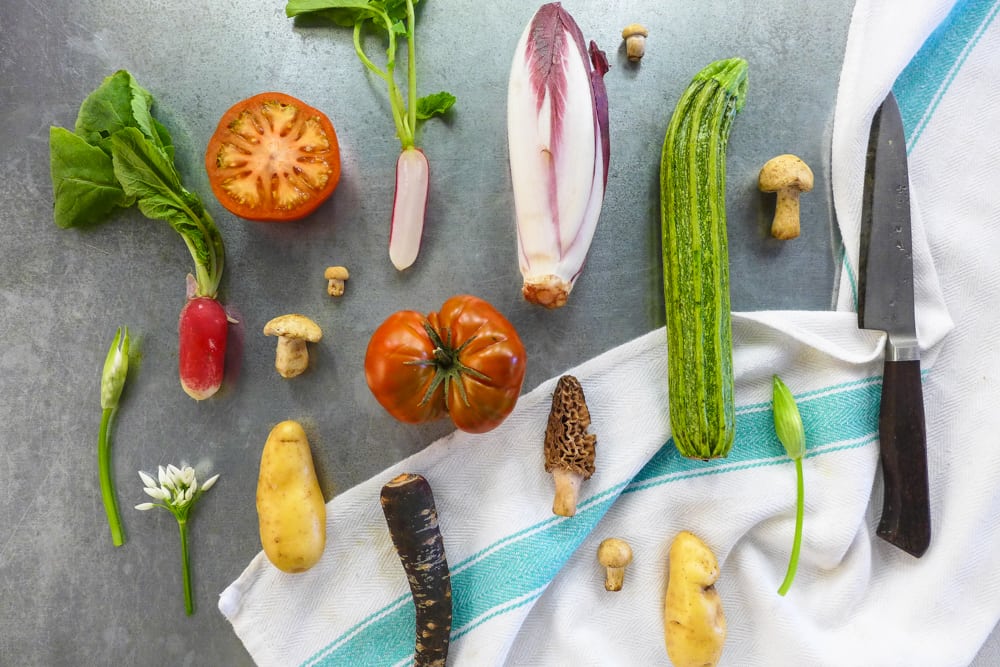 Stretching from the lower Rhône River to the Italian border, Provence’s regional cuisine is responsible for some of France’s best-loved, most internationally admired dishes. As a result of its Mediterranean climate, Provençal cuisine is deeply rooted in a trinity of olives (the king of Provençal cuisine), garlic and herbs de Provence: oregano, rosemary, thyme, savory, marjoram. In a similar vein to Gascon cuisine, Provençal food is decidedly rustic, unlike the world-famous haute cuisine typically associated with the country.

In her 1972 book, Vieilles Recettes de Cuisine Provençale, C. Chanot-Bullier divides Provençal cuisine into four sub regions. ‘Marseillaises, Martegalle, and Aixoise’ are synonymous with fish stews and soups, notably bouillabaisse; ‘Arlesiennes and Camarguaises-Comtadines’ have prominent focus on vegetables; ‘Toulonnaise and Varoise’ embody the food of the Côte d’Azur, famed for its coquillages and tapenade – a paste of black olives, anchovies, garlic and capers; while Nice is rooted in technique more closely associated with Italian cuisine, having only been considered part of France since 1860. Alongside Salad Niçoise and Pissaladière, Ratatouille is particularly popular in Nice.

At Sardine in Islington, the menu is a celebration of Provençal cooking – alongside some further flung Mediterranean influences – championing food that’s both simple and vivid. A compact site behind the McDonald’s on City Road, adjoined to the Parasol Gallery, the restaurant opened in 2016 as a project by Alex Jackson – having previously worked as head chef at Rotorino and Dock Kitchen – supported by mentor Stevie Parle (Pastaio, Craft London, Palatino). Here, the space is clean-lined, placated by a large open kitchen and a long communal table that spans the main dining space. With its pastel tiles, concrete surfaces, light wood and juvenile mural on the back wall, Sardine is stylish but unflashy – as further showcased throughout a midweek dinner here. In the kitchen, chef Alex Jackson and his brigade serve a relatively concise menu of homely dishes: unfussy, modestly presented but generally joyous. A brittle, bite-sized crostada topped with cannellini beans provided a glimmer of what to expect with dinner. Rabbit rillettes were delectably insalubrious, as they should be, spread across dense sourdough. A puck of fiery black pig ‘Nduja – also spread on toast – was another simple pleasure highlighting remarkable produce. The cod main was embellished with an olive oil-spiked broth, accompanied by courgettes, black olives and basil leaves. Although the skin was flaccid, the fish’s flesh had been treated with care, well paired with its bedfellows. A bistro classic done well.

A loose riff on steak frites, of sorts, featured competently-cooked Onglet lashed with not-quite-enough rich mushroom sauce. The jewel in the dish’s proverbial crown, however, were two potato beignets – a cross between doughnuts and rostis – tangled with ribbons of lovage. The beignets were so enjoyable, in fact, that we ordered another portion as an additional side dish. To finish, a cheese plate included wedges of Persillé du Beaujolais, Coulommiers and Lingot Des Causses. A scoop of Nougat ice cream with a feather-light salted fennel biscuit, however, provided the most memorable conclusion to this portrait of Provence exhibited in North London.

Sardine can be found at 15 Micawber Street, London, N1 7TB.

National newspapers react to a ‘day of chaos’ in Downing St