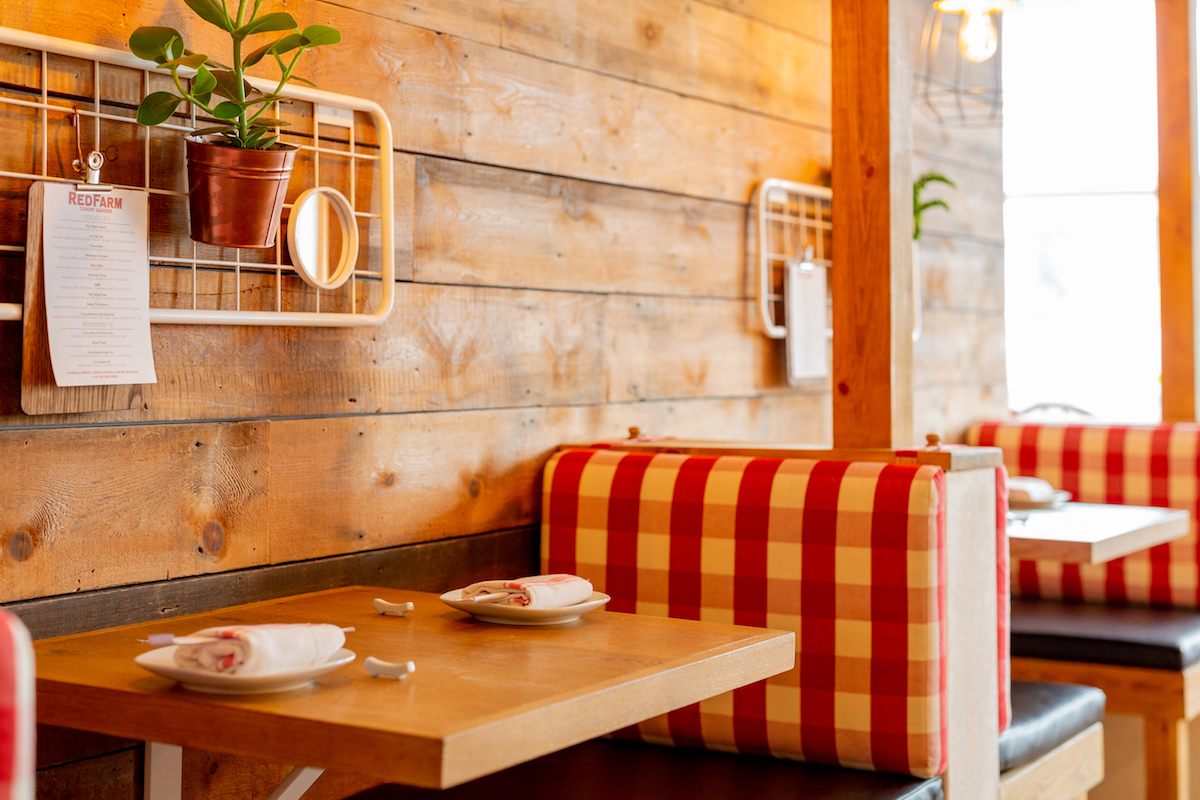 With over 40 years of restaurant experience (and 55 restaurants to his name), Brooklyn-born Shoenfield has paired his experience of America’s Chinese food scene with dumpling expert Ng’s contemporary culinary flair, ultimately creating a Chinese restaurant like no other. As is the case with the food served at the cult trans-Atlantic sites, the London restaurant’s menu is rooted in Chinese flavours and techniques displayed through a kitsch filter marrying unusual flavour pairings with quirky presentation techniques. These modern interpretations of Chinese classics aren’t particularly authentic, but they’re executed with finesse and gilded with a reassuring comfort food edge: each harbouring depth of flavour that’s cranked up to eleven.

Subsequently, the site space drifts from the stereotypical garish carpets and golden dragons of yesteryear. Instead, the quietly kitsch site is awash with white paint, red gingham and hanging plants. A long communal table dominates the ground floor, with a handful of secluded booths and a bar towards the back of the room. Service is suitably casual, warm and well-paced. Upstairs, Toots & Hoots acts as a dedicated bar, specialising in well-executed classics. Restaurant reservations aren’t taken in the conventional sense for parties of fewer than eight, though 96 seats are available across the three-floors.

Dinner begins with a “Manhattan of London” (eagerly priced at £13) – featuring a Madeira rinse and Bulleit Rye base – while glossing over the menu. Given the New York restaurants’ popularity and Joe Ng’s credentials, dim sum is the main draw. Having made their way across the pond, RedFarm’s “Pac Man Shrimp Dumplings” (£12) are, arguably, the most popular dish here, having become a huge hit with Instagram. Four har gau ghosts have black sesame seed eyes and a thin skin ensnaring fleshy prawns; chased by Pac Man himself – a nugget of tempura sweet potato on a bed of smashed avocado (of course). Both composition and flavour suggest style and substance.

Another hit in New York, the pastrami egg roll (£9) is a certain highlight. Using beef from Monty’s Deli in Hoxton, juxtaposed to Katz’s, the pastrami is accompanied by sautéed veg and snuggled by rice paper that’s cloaked with tempura batter and deep-fried, served with honey mayo. In a 2011 review for The New Yorker, Amelia Lester described the pastrami egg roll as a “soon-to-be cult dish on par with Momofuku’s pork buns.” Enough said.

An entirely new creation for the London restaurant, cheeseburger spring rolls (£10) are a far-cry from the bastardised burger-themed monstrosities ubiquitous in London at present (notably temper Covent Garden’s unlovable cheeseburger pizza). Here, minced beef is well-seasoned and paired with stringy melted cheese, wrapped and again deep-fried, enlivened by an accompanying burger sauce rampant with dill pickles. “Vegetable Spring Roll in the Shape of a Flower” (£8) are presented with a stroke of surrealism to match their Dalí-esque title. They’re fine, greaseless, but comparably less exciting than their wayward siblings. Tri-colour vegetable dumplings (£8.50), on the other hand, are served in a plant pot, boasting thin, opaque skins and fillings rife with fungus nuances.

RedFarm’s pork and crab soup dumplings (£8 for two) are pierced with (paper) straws evocative of candy canes. A devoted xiao long bao aficionado, I’m sceptical of the heretical serving suggestion, having previously criticised the trendier-than-thou versions unavoidable throughout Chinatown’s takeaway stalls. At RedFarm, though, the depth of flavour from the broth alone is redeeming with its transcendent excess: a glorious marriage of fatty pork and slightly sweet crab encased within a superlative wrapper. A giddying delight, against all odds.

A main of poached turbot (£32) vaunts gently-cooked slivers of fish with its inherently bold flavour profile, complementing accompaniments of soy sauce, spring onion and “frizzled” ginger. Just two desserts are available: a fruit plate (£8) dominated by watermelon, and custard bao (£8 for two), which is perhaps the most traditional dish on the menu. Delicate, pillowy buns are slightly sweet, filled with rich, eggy custard spiked with the faintest whisper of salt: moreish, decadent, gloriously insalubrious, almost on par with the much genuflected version available at Michelin-starred A Wong.

Purists will, of course, struggle to salute this unorthodox Chinese restaurant, yet the food is really quite endearing. Although pricey (it’s also easy to over-order) RedFarm has quickly become one of central London’s most contagiously jolly restaurants, escaping the need for extravagant instillations to distract from the food, service and general experience.

RedFarm can be found at 9 Russell Street, London, WC2B 5HZ.