By Jonathan Hatchman, Food Editor, @TLE_Food Within some of London’s trendiest restaurants, the world of art is rarely far disconnected. A recent prime example is that of Mayfair’s Sexy Fish from Richard Caring’s Caprice Holdings: which, like most of his group’s restaurants was an instant smash hit addition to the area’s dining scene, with a […] 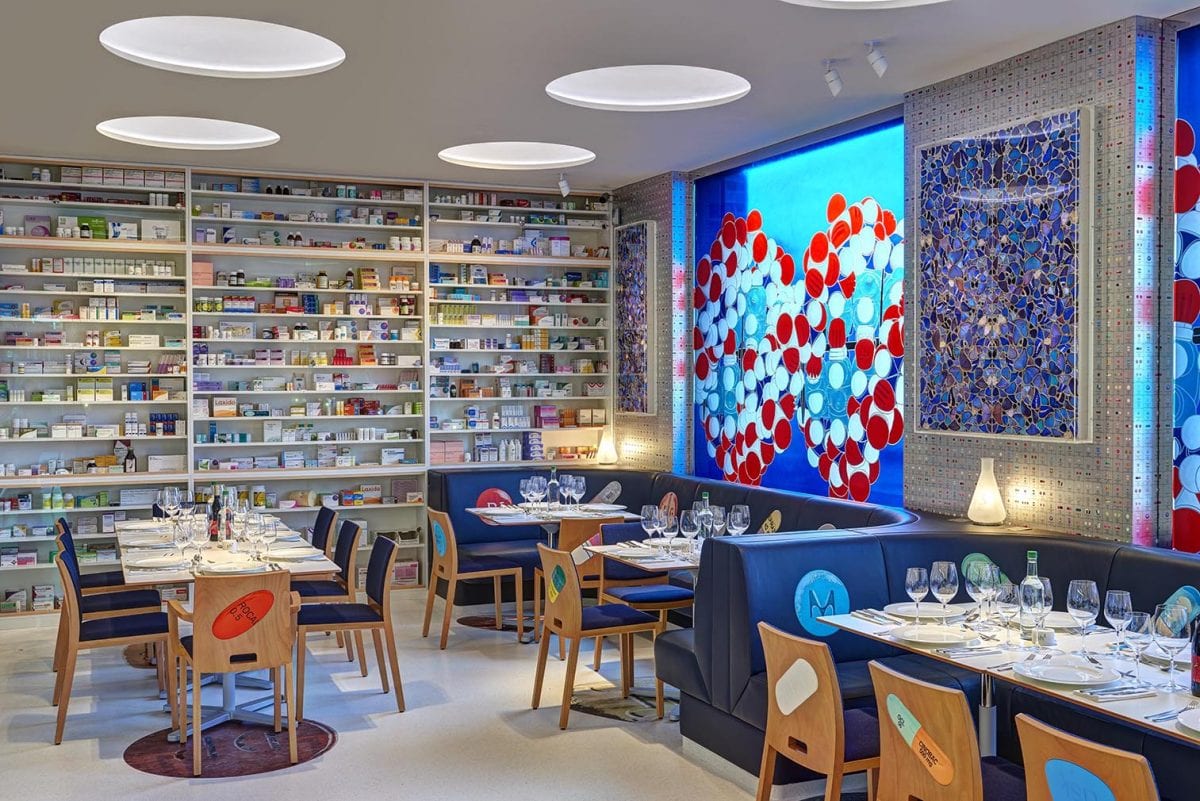 Within some of London’s trendiest restaurants, the world of art is rarely far disconnected. A recent prime example is that of Mayfair’s Sexy Fish from Richard Caring’s Caprice Holdings: which, like most of his group’s restaurants was an instant smash hit addition to the area’s dining scene, with a table for two during a peak dinner hour still painfully arduous to secure. Aside from the apparently exceptional fish, and the celebrity clientele that frequent the restaurant – what’s perhaps most notable about the space is the interior, with original artworks from the likes of Michael Roberts, Frank Gehry, and Damien Hirst, who has provided three exclusive artworks. Alongside art, Hirst has a huge passion for food, a passion that he famously combined with his artwork during the late 1990s, becoming heavily involved with Pharmacy, a restaurant venture opened in Notting Hill that was controversially designed to internally mimic a pharmacy, with plenty of installations designed by Hirst himself. After five years of operating, conversely, Pharmacy’s edge was lost and the restaurant closed its doors in 2003.

At the tail end of last year, however, Hirst opened Newport Street Gallery, taking over a number of converted Victorian spaces in a forgotten part of Vauxhall that’s located away from the beaten track. Acting as a public exhibition space for a portion of the artist’s own extensive collection, soon after opening it was announced that a gallery canteen would open upstairs, breathing life into a new incarnation of the infamous Pharmacy. This time around, the restaurant has opened in collaboration with Mark Hix – the chef that has become somewhat iconic for his simplistic take on British cooking in recent years. Having known one another for years, and given both of their passion for food and art, the collaboration came about organically, what with Hirst having provided plenty of artworks within Hix’s restaurants, most famously a formaldehyde tank housing a preserved Hereford cow and a cockerel, acting as the main feature at Hix’s chicken and steak house – Tramshed in Shoreditch.

At Pharmacy 2, the menu has been overseen by Hix, and the interior setting designed completely by Hirst, and while there are no pickled farm animals on display, the apothecary theme is far from subtle. Inside the narrow dining space, the coloured stained glass windows with double helix patterns allow a small amount of light to seep into the space, while the bar is lined by stools topped with cushions made to represent a number of pastel coloured lozenges. Marble floors are inlayed with various pill designs, and wall-sized medicine cabinet displays made famous by the artist are a huge feature, joined by various kaleidoscopic butterfly installations. The meticulous attention to detail is absolutely outstanding, so far as the clinical magnificence of the venue makes us feel as though unworthy of dining here, as though far more respect should be paid to the giant working art installation. As for the menu, quite unsurprisingly there’s a focus on British ingredients, although various international influences have seeped into the mix, yet many of the dishes are relatively simple and well-priced. 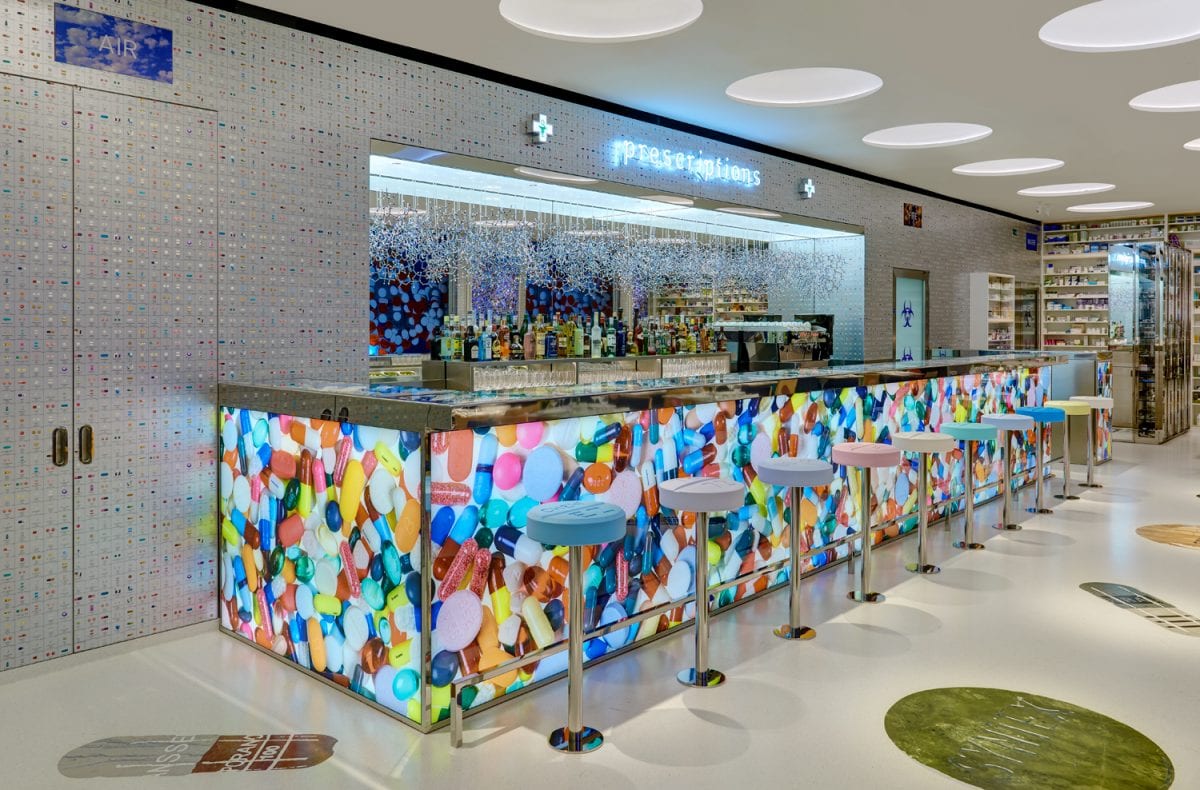 To begin, it’s unsurprising to see that the chef has brought a selection of popular dishes from his own menus to the menu at Pharmacy 2, including ‘Heaven & Earth’ – Hix’s take on a traditional German dish. A large marble of black pudding, perched atop a bed of buttery mashed potatoes sweetened with some slightly caramelised apple. Complimented by the sweetness of apple, the black pudding’s iron-rich flavour provides the dish’s key taste, which is pleasant enough, though the overall plate would have benefitted from a further drizzle of sauce. A wishy-washy Chinese-inspired broth featured a subtle note of ginger and little else, while the pork bobbing upon the surface was spiced far less than the menu suggested. The soft texture of the meat was surprisingly enjoyable, nonetheless, aside from the odd streak of fatty gristle. Next, a meaty slab of monkfish tail was perfectly cooked, with a tasty skin stuffed with warm woody herbs, though the overall flavour of the fish itself underwhelming, almost begging for a squeeze of lemon to coax some delicious depth of flavour.

One of the most popular dishes from the menu to constantly land upon our surrounding tables was a duck curry. Available with the choice of “hot” or “mild”, my girlfriend opted for the latter: boasting plump slivers of duck breast that melt in one’s mouth, served with fragrant rice that’s spiked with fried curry leaves to add some fragrant excitement to the plate. While there was nothing particularly wrong with the curry, which my companion thoroughly enjoyed, even for the most “mild” standards the flavour of was incredibly subdued. If only a middle ground between hot and mild were on offer, this dish could then have been perfect. Fortunately, the accompanying side of tiny apple pokoras were sensational, with a distinct element of crunch and well obtained balance of sweetness that cuts through the fatty oil used for the frying. The only fault is that they’re not available as a dish in their own right, otherwise I’d constantly return to prop up the beautifully decorated bar with a gargantuan bowl of the delightful snacks.

To finish, a selection of “small desserts” are on offer, a minute pineapple upside down cake had the nostalgic value of school dinners, though the taste was far superior, and a blood orange and white chocolate cheesecake had an ideal palate cleansing ability, with a pleasant level of sweetness. For the experience alone, a visit to Pharmacy 2 is a must for any art enthusiasts following a visit to the downstairs gallery. As for the food, although for the most part fine, nothing we ate springs to mind as being exceptional, yet the interiors and ambience here are some of the most unsurpassed on offer within London’s dining scene at present.