Since opening in New Delhi during 2009, Manish Mehrotra’s Indian Accent has since become regarded as one of the country’s best restaurants – currently placed at number 30 in Asia’s 50 Best Restaurants 2017 list. Trailing such success, Indian Accent then opened an international export in New York (six years later), trailed by a long […] 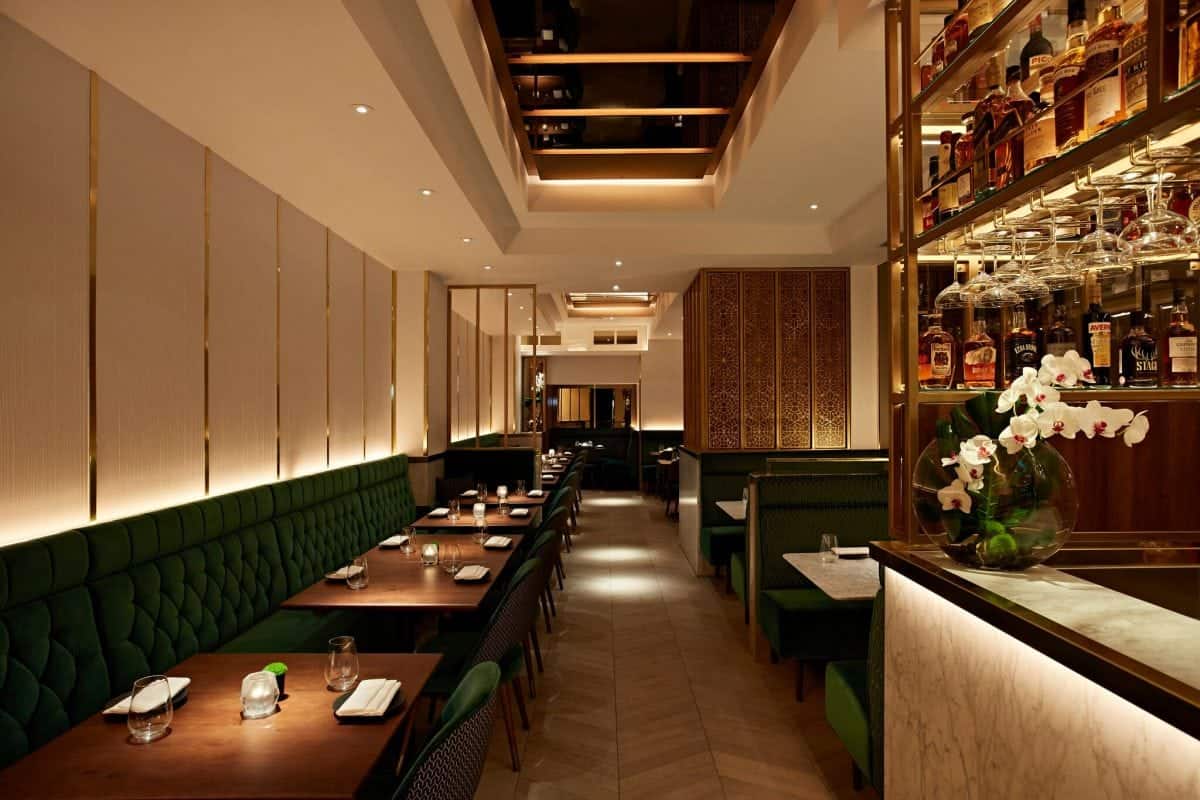 Since opening in New Delhi during 2009, Manish Mehrotra’s Indian Accent has since become regarded as one of the country’s best restaurants – currently placed at number 30 in Asia’s 50 Best Restaurants 2017 list. Trailing such success, Indian Accent then opened an international export in New York (six years later), trailed by a long overdue London restaurant, which opened in Mayfair towards the end of 2017.

Here, a set-price a la carte menu is available during lunch and dinner services, plus a tasting menu (six courses at lunch, nine at dinner). From the evening a la carte menu (three course £55, four course £65), we begin with three cornets that each harbour a paste of smoked aubergine, spiced duck and – best of all – chicken cooked in a sauce pungent with fenugreek. These are highly recommended by our waitress, alongside peaks of Kashmiri morel mushrooms dextrously filled with finely-chopped morels lolling on a bed of Parmesan sauce. In addition, the mushrooms are dusted with walnut powder, bringing further textural depth alongside a brittle Parmesan tuille. These follow an amuse bouche of a superlative naan bread stuffed with blue cheese and a shot of pumpkin and coconut shorba that’s spiked with garam masala, preventing the coconut cream from over sweetening the soup.

Dishes from the optional ‘middle’ course are equally enticing. Three coiled langoustines are shelled and gently cooked, simply accompanied by a smear of moilee – spiced coconut sauce that’s again well-balanced to avoid overpowering the prawns. Two pork ribs are cooked with enough elegance to overlook the glorified floor tile they’re served on; melting on the tongue, well-spiced and topped with ribbons of dried mango – perfect with the unctuous pork. TGI Friday’s, this is not.

Available for an extra supplement of £6, ‘Wagyu, foie gras tikka, aloo methi cheela’ is a dish that demands to be ordered, if only out of sheer curiosity. A puck of Wagyu fillet steak is thin and cooked medium rare, but the use of Wagyu seems completely pointless as the fillet has such a menial level of fat. Instead, this tastes like an under seasoned hamburger. An accompanying coin of pan-seared foie gras is well-cooked, however. Far better is the ghee roast lamb, served with roomali roti pancakes (more like soft tacos) and four differing chutneys – designed to evoke Peking duck. Chutneys include mint and coriander, green chilli, pickled garlic, plus a playful take on Hoi Sin sauce spiked with tamarind. The cooking of the lamb is remarkable, though the spicing is restrained, as though developed for a bland, post-war British palate.

Kulcha (flat bread) stuffed with peppery black pudding is – alongside the mushroom starter –  the best thing eaten at Indian Accent, even more delightful when slathered with Black Dairy dhal. The tiny portion of dhal is borderline parsimonious: perplexing given I’d happily arrive at the unspeakable dinner hour of six o’clock and mop up the lentil curry with strips of kulcha until closing time. We finish with doda barfi treacle tart, inspired by a treacle tart from Sainsbury’s, enjoyed by Manish Mehrotra while living in London. But to compare this particular version to a supermarket creation would be preposterous. Here, a biscuit base is crowned with a filling of barfi (a milky Indian sweet), cream, golden syrup and crushed chocolate cake. Topped with a modest quenelle of vanilla bean ice cream, the dish has exceptional balance. It’s, without doubt, the best dessert I’ve ever eaten in an Indian restaurant.

Not just another fancy Mayfair restaurant: Indian Accent is a welcome addition to part of the city already oversaturated with Indian fine dining restaurants.