By Jonathan Hatchman, Food Editor, @TLE_Food Based within Mayfair’s luxurious Berkeley Square, renowned celebrity chef Atul Kochhar’s Benares has been serving incredible Indian inspired dishes since 2003. And cosily nestled alongside a Rolls Royce dealership and Celebrity hotspots such as Robert De Niro’s Nobu just a few doors along, before even entering the restaurant; we […] 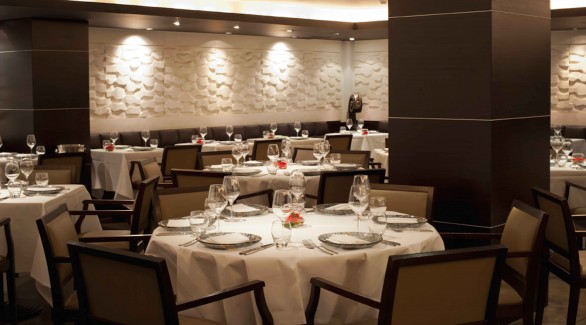 Based within Mayfair’s luxurious Berkeley Square, renowned celebrity chef Atul Kochhar’s Benares has been serving incredible Indian inspired dishes since 2003. And cosily nestled alongside a Rolls Royce dealership and Celebrity hotspots such as Robert De Niro’s Nobu just a few doors along, before even entering the restaurant; we could tell that our evening out at the dining institution would be a most classy one. Fusing culinary processes from his native India with his love for British sourced ingredients, the food on offer at Chef Patron Atul Kochhar’s mother ship is nothing less than what you’d expect from a Michelin-starred restaurant.

Arriving as a later evening seating to be warmly welcomed and lead to the busier than expected first floor eating space, weaving through the post-work crowds gathered in the bar, supping from expensive looking cocktails, we found our selves seated within the warm modern dining area. And although the A La Carte menu looked incredible, it would’ve seemed rude to dismiss the manager’s strong desire for our party to dine from the evening’s tasting menu. A seven-course banquet of sublime flavour amalgamations, each paired with an expertly matched glass of wine from the knowledgeable sommelier. Following our the arrival of our recommended passion fruit and chutney martini – the restaurant’s signature cocktail that combines fruity refreshing flavours before delivering a succeeding kick of chilli – the first of seven courses had made its way to our table.

An Amuse Bouche of Spinach and Apricot Tikki served with a satiating pomegranate and yogurt dressing. Soon followed by one of Atul’s own signature dishes: a frankly incredible battered soft-shell crab, served alongside a cocktail of white crab meat and celeriac mustard. Joined by a glass of Viognier to wash away any of the lingering oil from the deep friend crab before the arrival of the Murg Tiranga. A dish comprised of three cuts of chicken, each prepared using altering techniques. The crispy de-boned wing was a real highlight, resembling a posh chicken nugget, served alongside a pipette of mint sauce to inject into the meat.

By now our inner gluttons were already reaching a capacious limit, but with food so unexpectedly impressive it became impossible to give in to the following courses – a baked salmon fillet served alongside another helping of crab, this time in the form of a tantalising croquette, and a roasted rump of English Lamb, although the sourcing was the only thing English about the plate. Slightly tough to cut, albeit remarkably tender to eat, the pink lamb complimented a chickpea masala as well as a Lamb samosa – while tasty, the Samosa was perhaps an unnecessary addition to the already appealing plate.

Upon completing the final course – a tumbler filled with Rose and Raspberry steamed natural yogurt and Pistachio Burfi – my partner and I found ourselves fulfilled with having chosen to eat from the sensation tasting menu (although my expanding waistband was not so thankful). If Benares can continue to display this level of culinary finesse there’s no reason why the restaurant shouldn’t find itself still thriving in another twelve years to come.