Over the past eighteen months, I’ve visited Mayfair’s 8 Mount Street on three different occasions – eating at a different restaurant each time. In June 2015, Le Chabanais opened on the site (named after a French brothel) and closed soon after. A few months later, the restaurant re-opened with a new name (8 Mount Street) […] 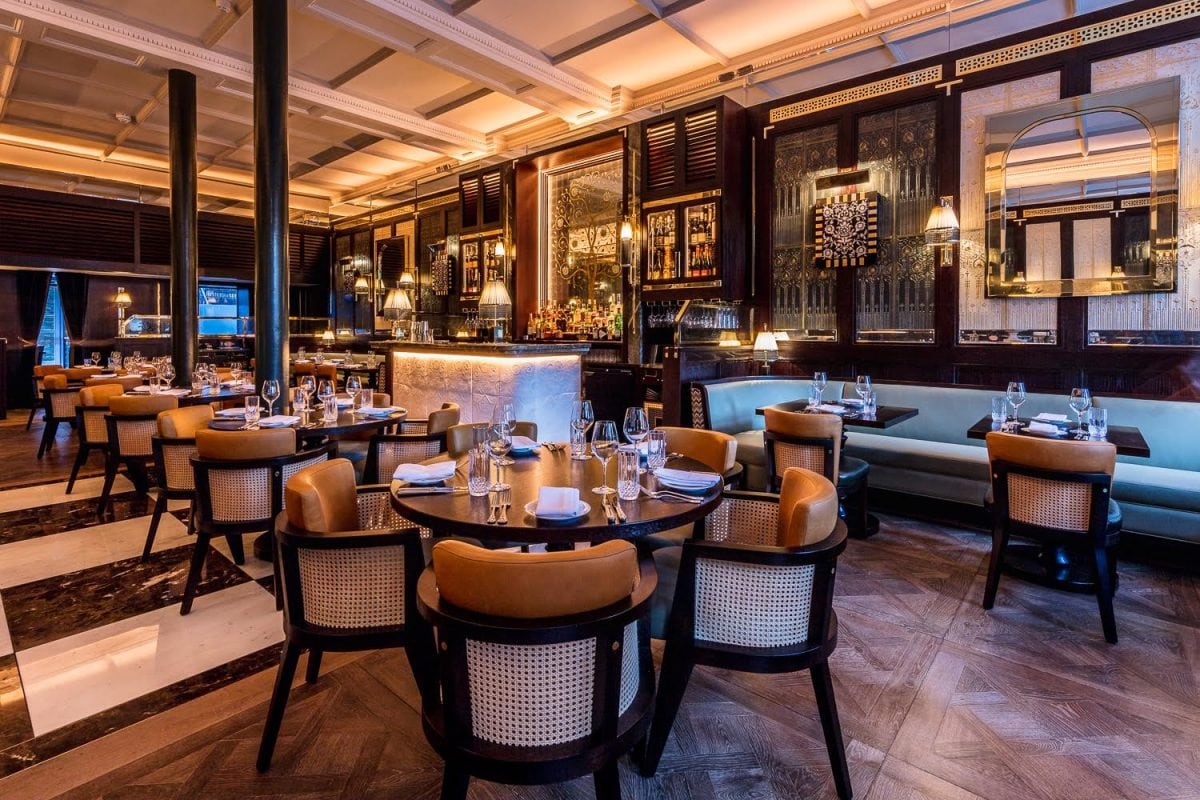 Over the past eighteen months, I’ve visited Mayfair’s 8 Mount Street on three different occasions – eating at a different restaurant each time. In June 2015, Le Chabanais opened on the site (named after a French brothel) and closed soon after. A few months later, the restaurant re-opened with a new name (8 Mount Street) and under new management.

Though the menu of Modern-European food was fine, everything was completely let down by dining room; a narrow dining space embellished with brass wall panels, brass flooring as tarnished as an old penny, and marble table-tops in keeping with uncomfortable chairs. As a result, the acoustics were so horrendous that noise levels were on par with a school canteen, making it impossible to hear our own conversations across the table.

Upon entering, the interior transformations are unmistakable. The room is now low-lit with soft, comfortable seating, a mirror embellished bar and a non-metallic floor. Jamavar is instantly more welcoming than its predecessor, with an atmosphere that’s ultimately comfortable aided by consistently friendly, well-informed staff. The service is attentive, but not to the point of becoming overbearing or intrusive. What’s more, the glitzy Mayfair crowd don’t seem to have tottered across the street from Sexy Fish, Novikov or Scott’s, at the time of our visit, which is no bad omen (for us, at least).

A selection of gin and tonic cocktails take pride on the drinks list, the type that would be rude to resist, enjoyed over a selection of papadums (including sweeter plantain crisps) with accompanying dips that taste as though made in house. The spiced mango chutney is most enjoyable. Elsewhere on the menu, a number of curry house staples are listed alongside some more exciting, even innovative dishes.

We begin the meal with a dish of soft-shell crab (£12) that’s deep-fried having been dredged in flour and some spice that tastes warily similar to Old Bay seasoning. The cooking of the crab is fine, though the batter is over thick and in places greasy. Wrong as it may be, it’s almost impossible to avoid drawing comparisons to the exceptional soft-shell crab dish on offer at Benares (albeit with a higher price), which is in spitting distance. Far better is a recommended dish of shami kebab (£12). A simple sphere of slow-cooked goat melts on the tongue, flavoured with subtle black cardamom. This is topped with a blob of mint chutney, cutting through the richness of the goat and pool of bone marrow sauce it bathes in. In addition, buttery paratha bread is served on the side as an ideal tool for mopping up every last drop of sauce.

‘From The Tandoor’, grouse cooked with Old Monk rum (£22) from Uttar Pradesh in India is one of the menu’s more exciting dishes. Grilled in a clay over, the grouse is cooked, seasoned and spiced well, displaying a deep game flavour that’s far superior to traditional chicken. This is joined by a jam of raw mango, working in harmony with the subtle, albeit evident, presence of the rum. Classic Laal Maas (£23) highlights a large, Hampshire-sourced, lamb shank slow-cooked for over eight hours, with a vivid sauce of Rajasthani chilli and tomato. Served simply with rice on the side, the lamb is cooked satisfactorily, with the fat melting into the sauce and adding to the extreme richness of the dish, though the hum of chilli is fainter than anticipated. An additional side plate, Jamavar Dhal (£7) has a pleasing smokiness, while the flavour of Dhungar Dhal (£7) is fine, yet the paste of tempered yellow lentils has an unpleasant, almost vomitus, consistency.

The less said about dessert, the better. A poached pear (£8) is adequate, though it’s the accompanying pear samosa that’s the jewel in the dish’s crown. ‘Chuski Falooda’ (£8), alas, is made with so much rose that it tastes as though it should be used to taint bath water and never eaten. The accompanying sweet basil seeds, on the other hand, have little taste and texture similar to frog spawn afloat in the dish’s milk-heavy base.

Overall, Jamavar shows an abundance of promise. The evening atmosphere is great, service is magnificent, and the food is mostly good, albeit lacklustre in places. Hopefully these possible teething problems can be ironed-out, helping Jamavar to confidently outlive its ill-fated predecessors.

Jamavar can be found at 8 Mount Street, London, W1K 3NF.