Exit Vauxhall Station at the foot of the bridge and head west, following the path of the Thames. Pass the 50 storey glass syringe, trailing the road to the right as it forks onto Nine Elms Lane and keep walking; crossing the invisible border between Lambeth and Wandsworth. Lapse the blocks of flats veiled with […] 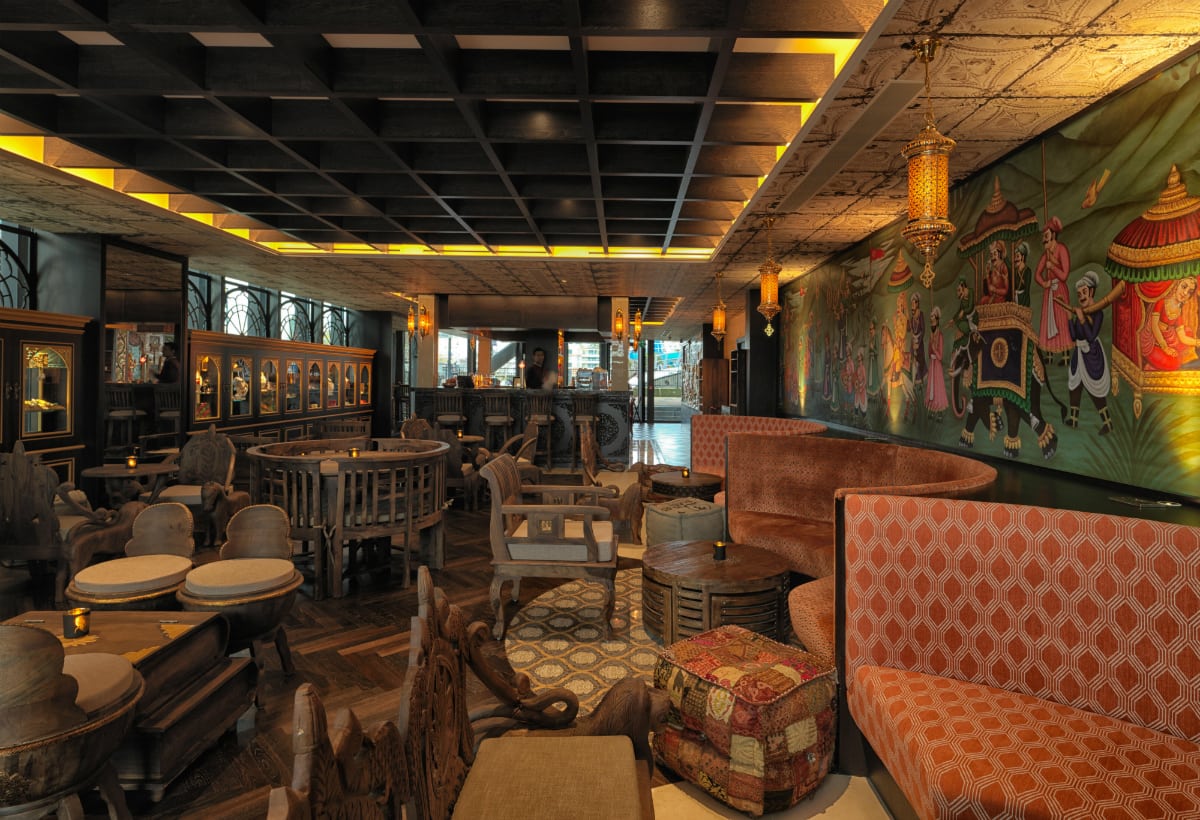 Exit Vauxhall Station at the foot of the bridge and head west, following the path of the Thames. Pass the 50 storey glass syringe, trailing the road to the right as it forks onto Nine Elms Lane and keep walking; crossing the invisible border between Lambeth and Wandsworth. Lapse the blocks of flats veiled with trailing ivy and the new (controversially located) American Embassy. Keep walking. The road then continues its winding tour of unaffordable industrial rubble. Keep walking. Past Waitrose and the shiny new glass buildings footed by Telletubbyland voice trumpets, a 14-foot, two tonne bronze elephant finally marks the entrance to Chokhi Dhani.

This stretch of road is an odd location for an embassy, as well as a new restaurant. Although just opened, the first London outpost from the heralded Rajasthani chain (first opened in Jaipur during 1990) was almost empty during a recent lunchtime visit, apparently busier during evening service. The masses will come, eventually following locals, providing the food is great and word is spread.

Having just opened, the launch was recently celebrated with a glamorous party attended by celebrities such as Pixie Lott and Professor Green (my second least favourite restaurant critic). Downstairs, Indian street food – as revolutionised in London by Kricket and Dishoom – is the key focus, while head chef Vishnu Natarajan’s upstairs menu has a fine dining slant; marrying Indian flavours with flourishes of French refinement. The space is equally opulent. While the floor to ceiling windows add a cruise liner aesthetic, they also boast pleasing views of the Thames, and much of the furniture (heavy oak chairs and tables, crockery and glassware) is sourced from India. Downstairs, a marble depiction of Harem Life by artist Arjun Prajapati takes centre stage. During lunch, the restaurant was clearly overstaffed, but all servers were discrete and uncommonly polite. Lunch begins with a perfunctory entrée of poppadoms and chutney, albeit refined. Lotus root and beetroot crisps were also served with mango and apricot chutney benefitting from some tartness, and a puree of avocado had rampant spicing to complement the inherent fattiness. Next, lamb’s brains were championed in a dish featuring the criminally under-appreciated cut, fried with plenty of onion, garlic and garam masala, texturally wispy and slightly camouflaged by a whisper of scrambled egg. An absolute triumph. Slow-cooked pulled rabbit, on the other hand, had plenty of dry spiciness to complement the meat’s slight gaminess. The rabbit was served with a suggestion of Bhaang (an edible, legal, strain of cannabis) which didn’t bring much to the dish, other than inevitable column inches.

Speaking of outrageous ingredients, Chokhi Dhani claims to serve London’s first Indian take of foie gras and pumpkin. With the otherwise classic Laal Maas, however, a lavish ingredient afforded the dish’s shortcoming. While the rich sauce flecked with red Mathania chillies was fine, rump of lamb was used instead of traditional (bone-in) mutton. Yes, the lamb’s rump appears more appealing, but prospers from fast-cooking, as is the case with steak. Instead, the slow-cooked lamb becomes dry, without bones or enough collagen to retain moisture. The sauce was, as a result, less rich than typical, without the succour of fat to bleed into the rich tomato base. The sauce was a fair dampener for the matcha green tea mint paratha, however, tasting far less absurd than it would seemed: delicious, even.

Far better was a colony of tiger prawns from the Tandoor oven. Two pawns the size of forearms, like helpless lobsters, were served in the shell and expertly spiced – powerful, but without overpowering the delicate flesh. The cooking of the prawns was also superlative, slightly protected from the Tandoor’s ferocious heat by their cloaks of armour; the completed heads demanding to be unattractively slurped with gusto. These were simply served with a fistful of gently pickled, slightly sweet radishes acting as a revitalising palate cleanser. A few years ago, an old fried subjected me to a dessert consisting of vermicelli relentlessly boiled in milk and sugar, eventually adapting the texture of a gargantuan blister. I’ve still not forgiven him. The thought of the dish keeps me awake at night, and I’ve since been terrified of enduring a remotely similar experience.

“Which dessert contains the least amount of dairy?” I asked. The waitress instantly suggested the panna cotta, or ‘cooked cream’, in English. Although the name itself suggests otherwise, this was not the ruinous dairy overdose I’d expected. Instead, the panna cotta was elegant – well set, delicately spiked with some subtle notes of cardamom and served on a bed of lurid green lime curd and topped with a shard of dark caramel.

With a charming setting and generally promising menu, Chokhi Dhani is a promising introduction to the soon to be burgeoning ‘diplomatic quarter’. Another strong addition to London’s amass of high-end Indian restaurants.