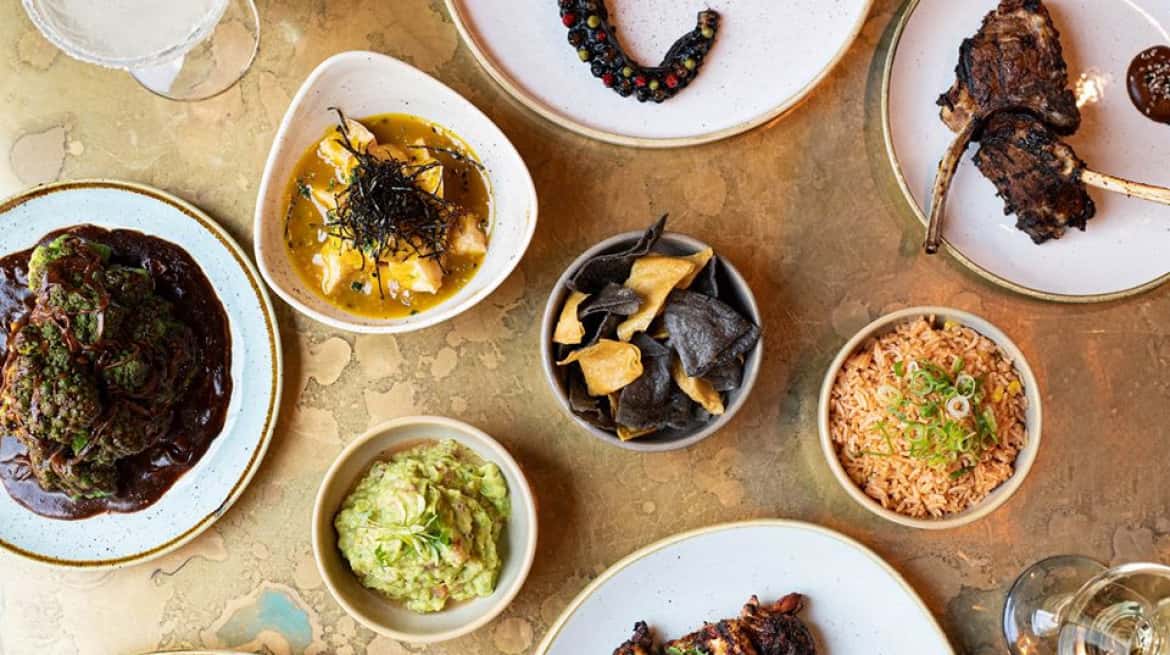 If there’s one thing Londoners can’t get enough of, its tacos. This street-side Mexican dish has quickly become a popular mainstay on the food scene in the capital, with a wealth of taquerías, restaurants and street food outlets knocking out superlative corn (or wheat) tortillas to the masses. Borough’s El Pastor opened a second site, Casa Pastor, in Coal Drops Yard last year, while vegan favourite Club Mexicana continue to expand their plant-based concept across the capital. Notable nods to Breddos Tacos, Soho’s Corazon and Santo Remedio for consistently serving up their riffs on this Mexican staple.

With the so-called “taco revolution” still in full throttle, new opening Caldera on Mare Street decided to join in on the tortilla action. Flinging open the doors towards the end of last year, Caldera has gone slightly off-piste with their Mexican offering, dishing up playful and creative dishes imbued with global flavours as well as showcasing their interpretation of Mexican dining. While core menu items like guacamole, burritos and enchiladas all feature, diners can discover dishes like grilled octopus marinated in black chichilo-goma ashes with salad; a poke bowl with salmon, guacamole, edamame beans and mixed quinoa; and romanesco broccoli with ajillo and onion dressing. Tex-Mex, this ain’t.

As for the food – and like with any restaurant that has opened in the last several years in London – the menu lends itself to sharing (and on the eighth day God created small plates). The tacos are the kitchen’s strong point and come served in portions of three. The grilled prawn tacos (£7) with chilli-spiked guacamole were remarkably simple, but very much held their own in the flavour stakes. Meanwhile, the wild mushroom tacos (£7) with slow-cooked nubbins of okra, fennel and lashings of the distinctively complex mole amarillo were staggeringly delicious. Make no mistake – these tacos are arguably some of the best in east London.

There were crisp blue tortilla chips served with a fresh guacamole (£6.25), as well as padrón peppers with Maldon salt (£4), plus Mexican corn on the cob (£4.25) wonderfully charred and cloaked with lime juice and chilli powder. Elsewhere, from the ‘what you didn’t know section’ the lamb chops (£5.50 each) were executed with aplomb. Two meaty specimens, beautifully marinated and served with a smoky baba ganoush, and mole mixed with miso (homemade on a volcanic metate over ten hours using 19 ingredients, no less).

To finish, the bartender’s dessert (£3) piqued our interest. Essentially a cheesecake in a glass, the layers featured a biscuit base bottom, a pleasing amount of dulce de leche and a dollop of fresh cream. With Margaritas served as they should be – salty, sweetness, bitter and sour all in one sip – the drinks menu is a cornucopia of tequila delights. Don’t miss the Pisco Sour – worthy of a return visit.

There were, of course, some nuances that perhaps detracted from the experience, like a somewhat unnecessary DJ and the toilets being in the office block next door. However, the food and service were enough to hold its own and establish Caldera as the perfect place for fans of Mexican cuisine that want something a little less… Wahaca-esque.