Flicking through photographs of London’s skyline just before the turn of the millennium, it’s now impossible to overlook the colossal number of skyscrapers that have popped-up over the past seventeen years. A clear sign that London is a city dead-set on keeping up appearances with the likes of New York, Hong Kong and Shanghai. These […] 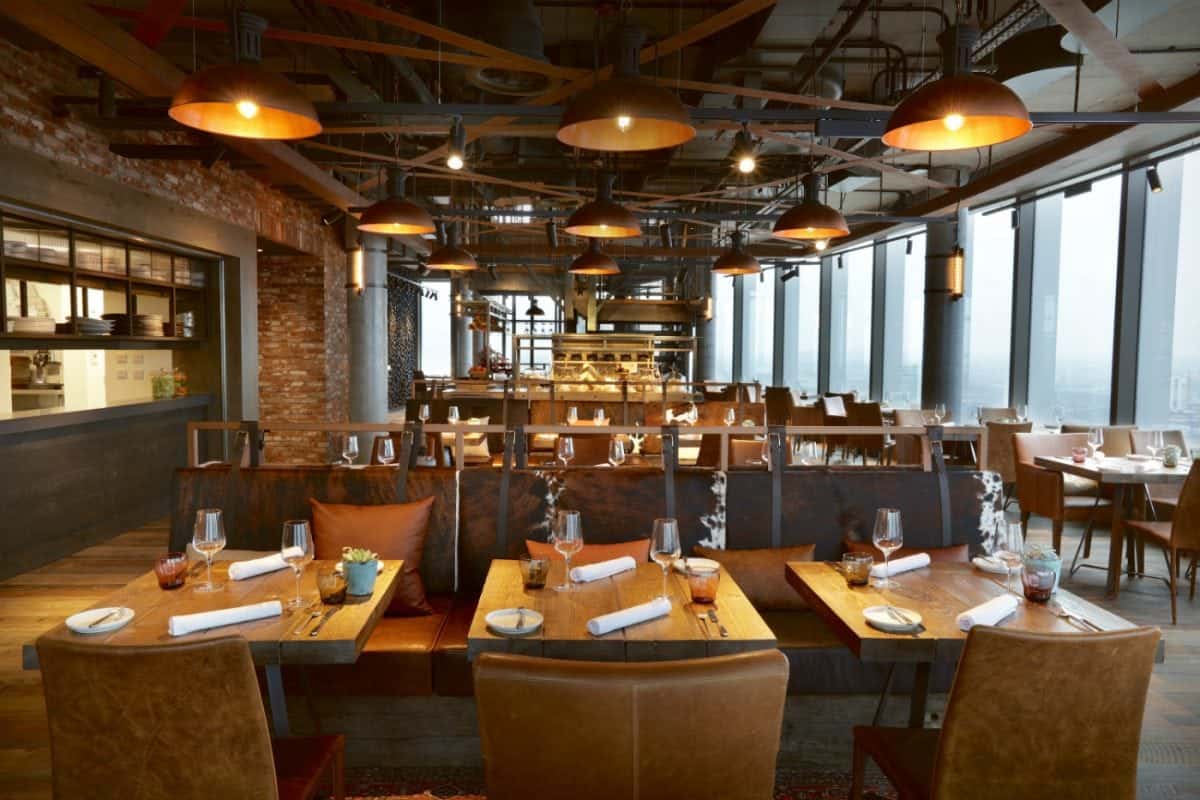 Flicking through photographs of London’s skyline just before the turn of the millennium, it’s now impossible to overlook the colossal number of skyscrapers that have popped-up over the past seventeen years.

A clear sign that London is a city dead-set on keeping up appearances with the likes of New York, Hong Kong and Shanghai. These buildings are structures of power, of wealth, of luxury – so it’s hardly surprising that so many high-end, high-rise restaurants have opened across the capital. The square mile, and beyond, is now a cluster of phallic glass towers that pierce the sky, looming over one another. It’s as though they’ve been designed by Architects with the desire to slap God across the face from the top floor, peering down their noses at the next lankiest opponent.

Alas, many of these high-rise restaurants are temples of ill taste, using panoramic views as an excuse to serve department store canteen food at luxury retail prices. Others, nonetheless are simply brilliant: the views are merely an unnecessary bolt-on to compliment an already tremendous dining experience (Galvin at Windows and City Social, in particular). The latest of these particular restaurants is Bōkan, having opened at the top of the Novotel in Canary Wharf. What’s initially most surprising is the difficulty to find the location, when walking from the station – especially when considering its height. When we do arrive, a security guard ushers us into a lift and were rocketed to the 38th floor at ear-popping speed.

Like at Oblix (in the Shard), we pass through a darkened corridor which adds drama to the view, once we reach the lobby with natural light that floods the three-floor restaurant and bar space. Well, it would if the weather was not so gloomy. First, a drink in the upstairs bar (there’s also a rooftop bar, which will be heaving come summer). The drinks list is, perhaps, Bōkan’s most impressive offering. Revering local history and the surrounding docks, each of the signature cocktails are named accordingly (‘The GMT’, ‘Millwall Grain’, ‘Blackwall Frigate’, etc.) The ‘Cutty Sark 1869’ (£8.50) combines vodka with fresh flavours of pomegranate, geranium, lime and mint, while a classic Virgin Mary isn’t parsimonious with the Tabasco, thankfully.

Downstairs in the restaurant, on floor 37, nearly all of the tables are within three-feet of a window, so it’s almost impossible to miss out on a promising view of the city’s old vs. new architecture, the Thames and, of course, One Canada Square (London’s tallest building, until fairly recently). These floor-to-ceiling windows are joined by décor that’s, above all, industrial; another nod to the area’s heritage. As for the food, the menu is described as ‘Modern-European’ with a British twist. To start, sea bass carpaccio (£9) features slivers of the raw white fish sliced so finely they’re transparent, with an electric blue plate resembling an ocean bed. Though the fish is sliced perfectly and prettily fanned out across the plate, the accompanying olive oil and mayonnaise both overpower the delicate fish, turning the dish into an offshore oil spill.

Better is a conical mound of well-cooked squid (£9), stuffed with finely diced courgette, peppers, aubergine, tomato and basil. The stuffing is a fancy Ratatouille, of sorts, and complements the squid remarkably, as does the picture-perfect blob of saffron sauce in the middle of the plate. Again, a blue plate is used and the saffron sauce (perhaps intentionally) resembles the blazing sun in a cloudless sky, and that’s exactly how this dish tastes. It is the embodiment of long hot summer evenings that we yearn to last forever.

A main of Rhug-Estate lamb cutlets (£24) are cooked perfectly rare, as ordered, and arranged atop a bed of aubergine puree, drizzled with Chimichurri sauce. The dish is a bizarre love triangle. The lamb works well with the puree and the sauce, each alone. Together, however, the flavours are discordant – no matter how well-prepared everything on the plate might be. With the venison hunter’s pie unavailable, I choose the pork belly (£19), on recommendation. Besides cheek, pork belly is my favourite cut of pig, alas this particular dish is disastrous.

In fairness, the pork is cooked well, but the overbearingly sweet barbecue sauce that drenches the meat is abysmally cloying; so sweet it’s like cough mixture for children that’s so saccharine it tastes like a punishment. To make things even worse, the pork cooked in barbecue sauce is also joined by an absolutely fine apple sauce. The boat of hollowed-out potato skin filled with mashed potato that’s spiked with raw onion and topped with flavourless crisp sails, on the other hand, is absolutely ridiculous.

To finish, we’re told that the chocolate soufflé (£8) will take 15 minutes. It arrives half an hour later, joined by a scoop of salted peanut ice cream. I’m advised to dig a hole into the top of the soufflé and place the ice cream slightly inside. Fortunately, the taste is worth every second of the elongated delay: like the best version of Reese’s peanut butter cups imaginable, the soufflé is expectedly light and fluffy, with astounding depth of flavour. This isn’t just the best thing eaten here, it’s the best dessert I’ve tried in months – it’s so good, in fact, that it almost provides complete consolation, following the mains.

Bōkan has its moments; the overall meal is not without fault and the service is friendly but somewhat slow. At its best, however, the level of skill showcased with the better dishes sampled is remarkable. What’s more, compared to most other high-rise restaurants, the prices here are quite reasonable. Best visited on a bright day for the experience and the view (not forgetting the bar) – Bōkan isn’t necessarily London’s best sky-high restaurant, but it’s by no means the worst.