By Jonathan Hatchman, Food Editor, @TLE_Food The concept of socialising does become very different upon being surrounded by local bankers and city folk out on business, making more noise than a bull in a china shop. The social element of dining out is, obviously, very close to Jason Atherton’s heart – the owner of London’s […] 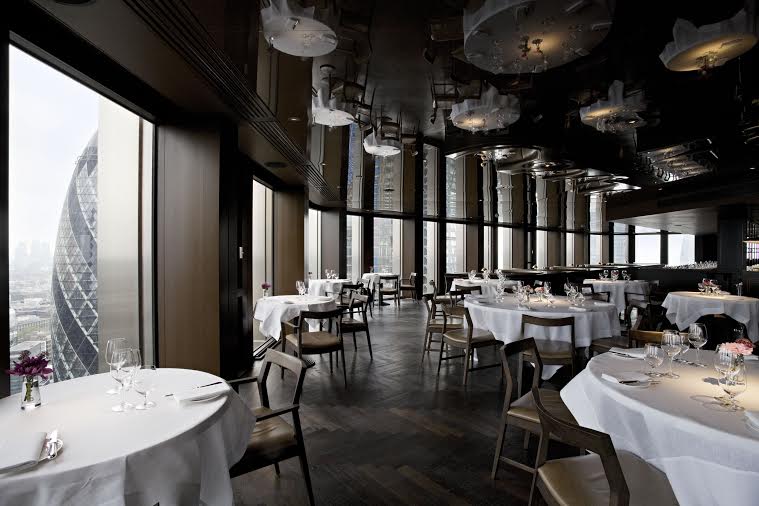 The concept of socialising does become very different upon being surrounded by local bankers and city folk out on business, making more noise than a bull in a china shop. The social element of dining out is, obviously, very close to Jason Atherton’s heart – the owner of London’s City Social, Pollen St. Social, Little Social, and Social Eating House… The list goes on. Of course, there’s the conversationally riveting chance to pour glass upon glass of expensive wine down one’s throat, not to mention the wonderful food on offer (with each dish presented like a perfectionist painter’s work of art), however it becomes increasingly arduous to hold a conversation when finding yourselves having to bellow across the table, and to contend with the menial racket just so that the waiting staff can take your order, for that matter.

Thankfully, the food on offer at City Social is exactly what you’d come to expect from a Michelin starred eatery. Located on the 24th floor of the City’s iconic NatWest Tower, it comes as no surprise that the sweeping views are pretty exquisite, exiting the lift to the instant greeting of the close-by Gherkin, Cheese grater and Heron Tower, each peering down at us. Taking our seats in the busy dining area, sandwiched between two vibrant tables of guests, it came as a huge relief to have been offered the chance to relocate to one of the restaurant’s premiere window tables, just before our mains arrived, as the late dinner rush began to settle.

As for the menu selections on offer, it’s difficult to settle for just one of the tantalising options, with not one but three starter menus (simply “cooked”, “uncooked”, and “Pasta & Rice”) offering culinary delights such as Frenchman Creek oyster, Pig’s Trotter, Shellfish Linguini, Roasted Quail, Chestnut Tagliatelle and Smoked Scottish Salmon. The Chestnut pasta proved a worthy start, served with chunks of roasted butternut squash, smoked chestnuts and a tasty sage infused Velouté, meanwhile the overwhelmingly smoky salmon found its way to the table as if having just been unearthed from Treasure Island, served in a wooden chest that upon opening projected an impressive cloud of smoke before being transferred to a refreshing bed of pickled grapes, Celeriac Remoulade and apple. All served alongside a selection of breads: white with salted butter, brown bread baked in honey and a Chorizo and Parmesan focaccia. The latter of which was similar in taste to a refined version of our beloved Pepperoni pizza, and that’s no bad omen.

On to the mains, having been unable to decide I chose to take the waitress’ recommendation of the Lincolnshire rabbit dish, while my dining companion went for the dover sole, served off of the bone, having been given the choice. The sole, served alongside fluffy caper gnocchi and topped with samphire and a citrusy sabayon, was satisfactory, albeit upstaged greatly by the complex rabbit. Featuring a tower of rabbit prepared and cooked three ways: with a cured ham wrapped saddle, a breaded confit leg and a pork and rabbit sausage. Surprisingly, it was the succulent sausage that, against all expectations, was the star of the dish, also served alongside a handful of chanterelles, garlic crisps and Pommery mustard mash. Meanwhile dessert featured a vanilla soufflé laced with rhubarb for myself. Well-risen and presented beautifully, once again, yet the taste of the rhubarb was lost slightly in the wake of the vanilla and egg white. Whilst the Peanut and Banana dessert – crunchy peanut parfait, chocolate ganache topped with Bourbon jelly and an Old Fashioned cocktail soaked banana – delivered a rich, magnificent balance of comforting flavours.

Regardless of the rowdy post-work clientele that the restaurant seems to attract, the quality of the food alone makes London’s City Social a worthy dining spot if you happen to find yourself in the area. Just don’t forget to ask for a window seat.