Over the past four years, the Selfridges rooftop space has been utilised throughout the summer, taken over by Des McDonald Restaurants. This year, the department store’s fifth floor terrace is, once again, home to another restaurant; now overseen by San Carlo – the group behind Fumo, Cicchetti and Gran Café at Selfridges in Birmingham and […] 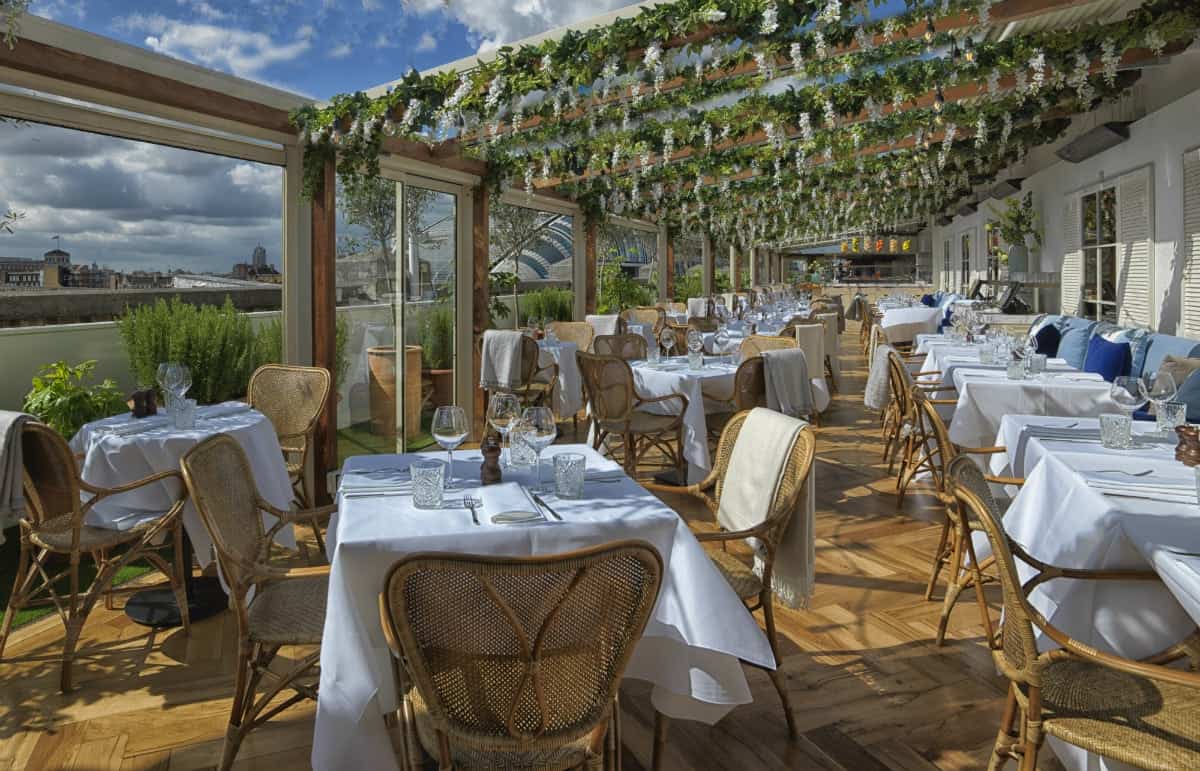 Over the past four years, the Selfridges rooftop space has been utilised throughout the summer, taken over by Des McDonald Restaurants. This year, the department store’s fifth floor terrace is, once again, home to another restaurant; now overseen by San Carlo – the group behind Fumo, Cicchetti and Gran Café at Selfridges in Birmingham and Manchester.

Accessible via an express lift on the ground floor (close to the main entrance, off Oxford Street), alto by San Carlo is prefaced with a verdant walkway lined with Italian chinotto fruit, disguising the otherwise unlovable service corridor. Past the reception, the restaurant is split into two sections, one of which benefits from a clear, retractable roof to coincide with the unpredictable English weather. Otherwise, the space is distinctly Italian. Wicker dining chairs are joined by tables cloaked with heavily starched linen, bathed in natural light – evocative of high-end piazza restaurants in Northern Italy. Separating the dining space from the open kitchen, a counter boasts fresh fish and shellfish that’s neatly arranged over ice.

Following a bowl of moreish smoked almonds, one formally-dressed waiter explains the menu’s Cicchetti ‘concept’. Dishes are, of course, intended to be shared – as is customary in 2018. Lunch began with a round of plump Colchester rock oysters, simply served with lemon wedges and sharp vinaigrette. A sphere of milky burrata was another simple dish, eloquently paired with aubergine caponata and crushed pistachio nuts, adding textural depth. Two scallops large as a toddler’s fist were well-cooked and served in the shell. Lightly breaded and cooked with white wine, butter and garlic, the scallops were unusually similar to delicate chicken Kievs, in taste.

From the menu’s ‘fritti’ section, humble Sicilian arancini was a cricket ball of dense risotto rice flecked with a rich ragú of slow-cooked beef, breaded and deep fried – served alongside a parade of roasted sweet peppers with enough acidity to splice through the arancini’s residual oil. An off-menu special of risotto rice with white asparagus and truffle was uncomplicated yet executed exceptionally. Al dente rice was bolstered by tangles of slightly sweet white asparagus – milder than typical green asparagus – balanced with parmesan and a shower of black truffle shavings which added decadence without overshadowing the dish’s other ingredients.

In place of dessert, ribbons of crostoli were superlative. First associated with Carnevale – the festival held before Lent, crostoli is synonymous with inland Venice and dates back to the Roman Empire. These paper-thin sheets of sweetened dough (traditionally spiked with grappa) are fried until golden then finished with a blizzard of icing sugar once cooled: a perfect light dessert to be enjoyed alongside a bracing espresso.

An urban oasis in central London, the restaurant serves competent Italian food in a calm environment, all matched with charming service. While many rooftop eating and drinking destinations are largely insufferable, alto by San Carlo is a charming addition to one of the world’s most iconic department stores.

On Wednesday 27th June, for one night only, seven of Italy’s most renowned chefs (with seven Michelin stars between them) will take over the kitchen at alto by San Carlo. Featuring contemporary takes on Italy’s regional gastronomy, the event will showcase a one-off five-course tasting menu. Tickets for the event are priced at £160 per person and are available through Eventbrite, or from Selfridges’ website.