Once home to Turnmills, world famous nightclub, the corner of Clerkenwell Road and Turnmill Street has, this year, seen the launch of to two brand new restaurants opening upon the site. The first, Sosharu, is the latest venture from Jason Atherton, heavily inspired by Japanese Izakayas, and in June Albion opened next door. Following […] 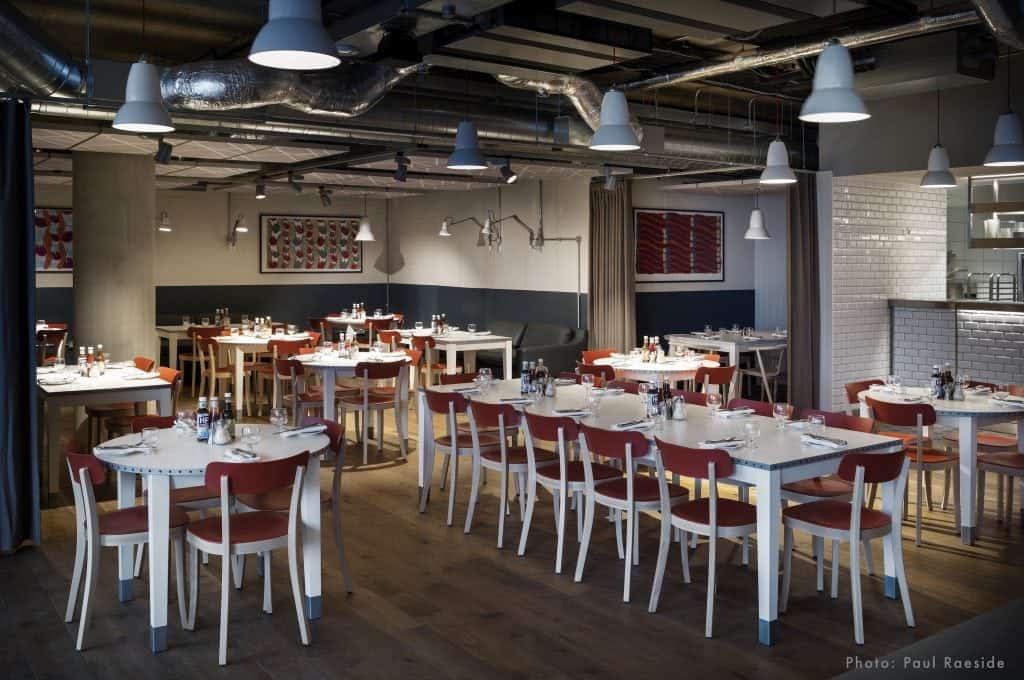 Once home to Turnmills, world famous nightclub, the corner of Clerkenwell Road and Turnmill Street has, this year, seen the launch of to two brand new restaurants opening upon the site. The first, Sosharu, is the latest venture from Jason Atherton, heavily inspired by Japanese Izakayas, and in June Albion opened next door. Following successful openings in both Shoreditch and Bankside, this is the third outpost of the joint venture between Sir Terence Conran, Peter Prescott and Isabelle Chatel de Brancion from Spin Architecture. Stylised as a traditional “caff”, the restaurant features multiple dining areas, with a number of different menus on offer, including ‘Breakfast’, ‘Pie Room & Charcuterie’, ‘Grill’, and ‘Brunch/Lunch’, while a retail area that specialises in seasonal ‘artisan’ produce is also available on site. Upstairs, the main dining space is furnished with pieces that showcase some of Britain’s most highly regarded designers, and has floor-to-ceiling windows that fill the room with light. The space’s incredibly powerful air conditioning also deserves a mention, coming as a great relief during our lunchtime visit on the hottest day of the year, thus far.

Picking from the ‘Brunch/Lunch’ menu, we began with devilled kidneys that had been carefully prepared with the intention to completely remove the inner fatty sinew – a laborious task that’s too often left to the diner to tackle, albeit without proper utensils. A generous heap of properly cooked kidneys was covered with lashings of sauce rich with Lea & Perrins, and served atop a thick slice of sourdough that had been baked in-house. Although I opted for the small portion, with just one slice of toast, the dish did border on becoming excessively vast as a starter. For the mains, a steak cut from a leg of lamb was fine (cooked medium-rare as ordered) and accompanied by some mint – lamb’s best friend. An additional accompaniment of cucumber, teamed with the mint, however delivered the freshness of tzatziki, albeit without the lactic twang of yoghurt. Elsewhere, a whole sea bream had been stuffed with fennel and lemon slices, lending the fish an internal succulence. The skin, however, had failed to crisp during cooking and was instead limp and unappetising. It’s the use of ‘Black Badgers’, however, that made the dish most pleasantly memorable: a type of dark brown Carlin Pea that’s often used as a British substitute for chickpeas, or indeed boiled and served as Parched Peas in Lancashire, with salt and vinegar.

Conversely, it was the dessert selection that impressed us the most during our visit. My friend’s choice of white chocolate ice cream with honeycomb and butterscotch was simple, albeit indulgent and rich with variation of texture. Summer fruit pudding, on the other hand, was made with bread also baked onsite, which had been soaked with the juice of summer fruits and carried a succinct sharpness in balance with sweetness, working as a marvellous palate cleanser. Focusing on quintessentially British classics executed well and served at modest prices, Albion is an unfussy, informal restaurant that although not particularly exhilarating, lives up to all expectations, at the very least. Just don’t forget to visit the retail area and the bakery on the way out.

Albion can be found at Unit 1, The Turnmill, 63 Clerkenwell Road, London, EC1M 5NP.