The Single Grain Scotch whisky is one of three new releases from the innovation arm of Speyside’s Kininvie Distillery. 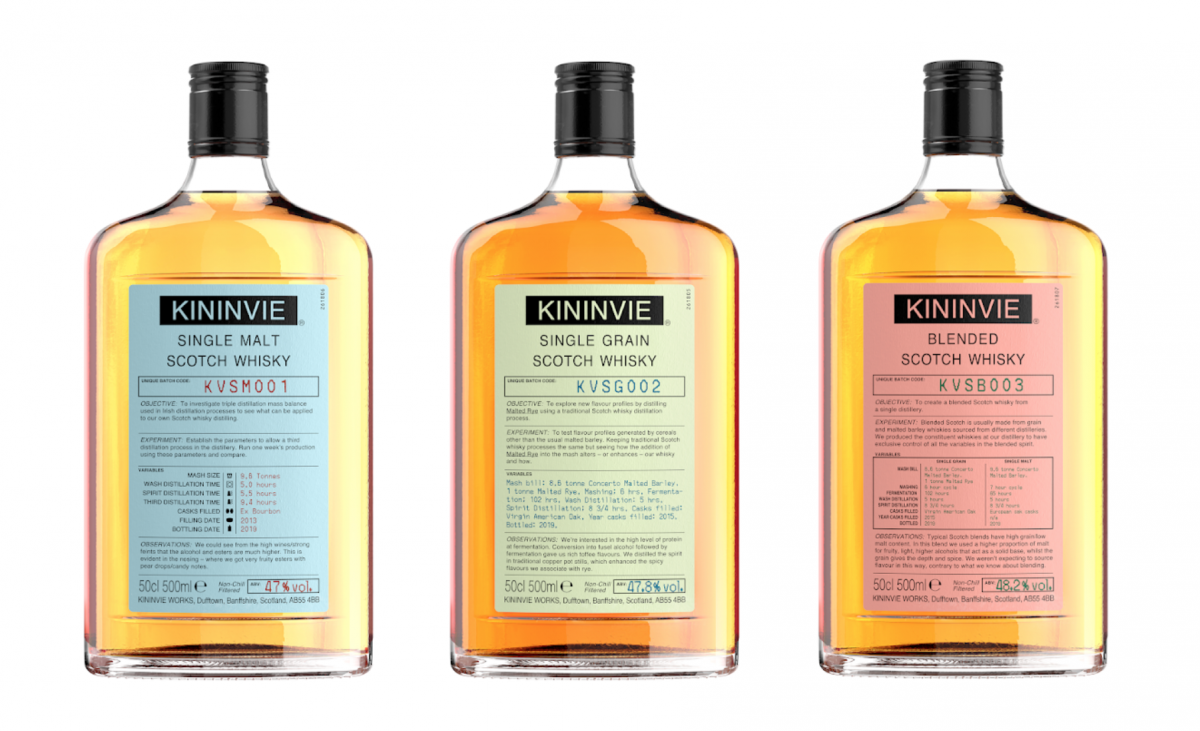 Kininvie distillery’s Kininvie Works has launched three new experimental whiskies. Releasing the outputs of three of its trials for the first time, the inaugural Kininvie Works range comprises a single malt, single grain, and blended Scotch whisky – each created with experimentation being the primary driver.

The Speyside distillery’s innovation arm, Kininvie Works is a free-thinking distillery; a place for experimentation, rather than working to a commercial agenda. Here, the team go against the grain and strive to challenge what we already know about Scotch whisky. The distillery operated alongside the Kininvie whisky distillery – William Grant & Sons’ most modern Dufftown distillery, launched in 1990. Over the past 30 years, the distillery has been a hub for creation and innovation.

Launched last year, each of the new Kininvie Works expressions are characterised by one distinctive technique, with the ambition to create a liquid representative of the learnings from the experiments carried out by the distillery. All are code-named, referring to the distillery, spirit type, and batch number (KVSM001, KVSG002 and KVSB003), and are presented in 100 per cent recyclable packaging, decanted into flat 50cl bottles which eliminate the need for additional bubble wrap or safety packaging. The variables of each trial, including grist weight, distillation times, casks used, filling, and bottling dates feature on each label.

The first of its kind released by Kininvie, KVSM001 is a triple-distilled single malt; KVSG002 is a single grain Scotch whisky distilled in copper pot stills, using a combination of malted barley and malted rye; and KVSB003 is a blend of double-distilled malt whisky and the Kininvie single grain malted rye and barley mash. For the KVSB003, all components are produced on site.

The whiskies are also accompanied by a white paper, published last year. Titled ‘The Influence of the Continuous Rousing of Spirit on the Characteristics of New Make Whisky Spirit,’ the paper details research into the effects of aerating spirit before it is filled into cask and can be downloaded for free from Kininvie’s website, where additional in-depth information regarding each experiment can also be found.

KVSG002, Kininvie Works’ single grain Scotch whisky was conceived as an experiment to explore the different flavour profiles generated by cereals other than the usual malted barley to see if, and how, the addition of malted rye could alter the whisky’s profile.

A three-year-old single grain whisky aged in Virgin American Oak casks, the resulting spirit is defined by the addition of malted rye to the mash (11 per cent), bottled at 47.8 per cent ABV. On the nose, initial sweet notes of caramel and honey are joined by the slight spiciness of rye, a whisper of apricot and some bread aromas. On the palate, the whisky has a remarkable balance of sweetness from the wood extractives and spiciness, with some further savours of dried fruit and drying wood spice which lingers on the finish with a suggestion of dark cherry. A very well-balanced and well-rounded single grain whisky. A highly successful experiment.