Brewed with saké yeast, Sun and Steel is a double-fermented pilsner from Iron Maiden and Robinsons Brewery. 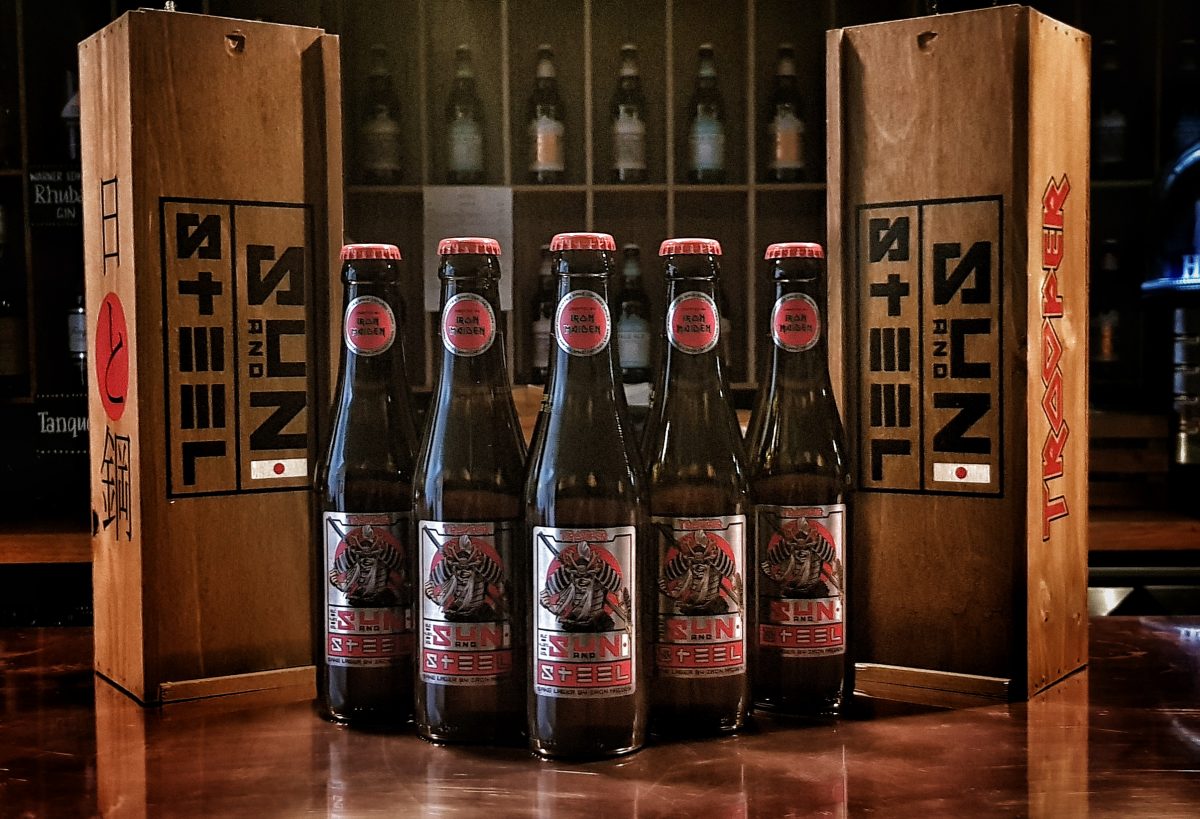 The 6th beer in the series, following the likes of ‘Trooper 666’, ‘Red ‘n’ Black Porter’ and ‘Light Brigade’, the Iron Maiden Trooper range’s first lager took over two years to create. Following a meeting with long-time Iron Maiden fan, George Yusa – owner of 300-year-old, family run Okunomatsu Saké Brewery in Fukushima – in 2016, lead singer Bruce Dickinson and Robinsons’ Head Brewer, Martyn Weeks, planned to produce a beer inspired by Japan’s national drink. Having obtained permission from the Japanese government, the beer is brewed with a sample of saké yeast that George brought along to the band’s 2017 show at London’s O2 Arena. A hybrid beer, Sun and Steel’s initial fermentation takes place using a lager yeast, followed by a second fermentation with the saké yeast.

On the launch of Sun and Steel, Iron Maiden’s Bruce Dickinson said: “This has been such an exciting project. I had a crazy idea to try and make a saké infused lager and over two and a half years later, here we are! I know Martyn and the team at Robinsons have had to become mad scientists to make this work but the end result is a really unique hybrid beer that tastes fantastic. Trooper fans have been asking for a lager, and here it is. I bet you would never have guessed we would do it like this though!”

Martyn Weeks, Robinsons Head Brewer, added: “Saké yeast has very special nutritional requirements and we had to learn how to make this work in a beer. We extracted the unique and delicate floral flavours from the saké and combined this with the malt and hops in the beer which lead us to the final Sun and Steel product. Once we were able to successfully grow the saké yeast we then had to design a new Pilsner lager recipe with the key being that it must complement the saké flavours in perfect harmony. After several trial brews using different combinations of hops, malt and subtle changes to normal brewing practises, we knew we were ready to start full scale production. The outcome is a two-stage fermentation and extended maturation process which after a total of 10 weeks delivers a unique flavour.

Named after the song ‘Sun and Steel’ from the 1983 Iron Maiden album, ‘Piece of Mind’ (the same album that features ‘The Trooper’) – which is in turn inspired by the life of Japanese Samurai Miyamoto Musashi, the beer has a golden complexion, capped with a thin white head. On the nose, pale malt notes are joined by prominent yeast aromas alongside floral and grassy notes joined by a feint whiff of corn syrup and lemon rind. Grassy savours continue on the palate, which is notably dry and clean with an underlying mineral character. Some lemon notes gradually build alongside some further malt notes which continue on the moderately sweet, refreshing finish alongside some nutty undertones. Like saké, Sun and Steel is particularly well-suited to pairing with a variety of foods.