These are the best pubs in East London. 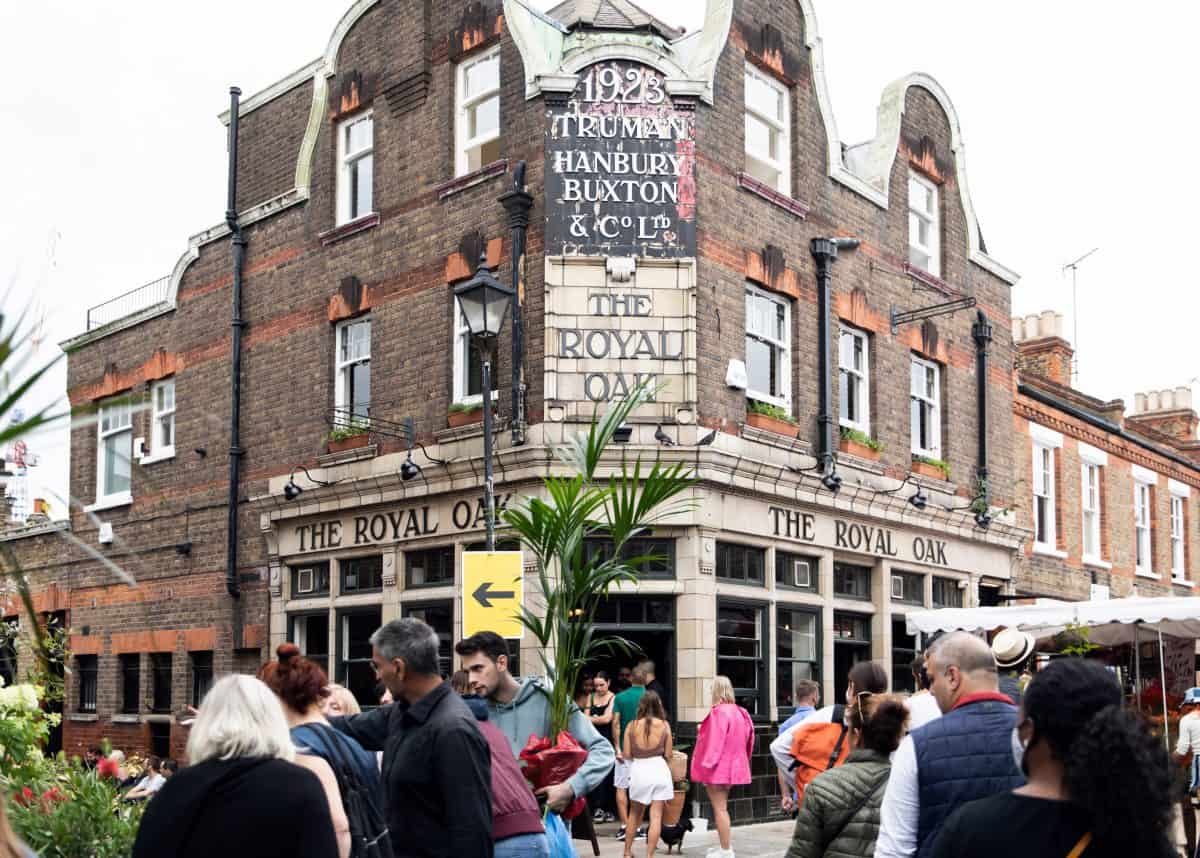 A cornerstone of society, the pub has played a vital role in British history for many centuries. While classic pubs continues to be celebrated (in the UK and beyond), countless establishments have disappeared from our villages, towns, cities, and high streets. Now, more than ever, these institutions rely on our support, most notably due to the extraordinary strain caused by the effects of the coronavirus pandemic. As businesses continue to re-open following the second national lockdown, we pick the best pubs in East London.

Dating back to the early 1920s, with its parquet flooring and wood panelling, a visit to The Royal Oak feels like stepping back in time – much like Nicholas Lyndhurst in Goodnight Sweetheart, much of which was set in this classic East London pub. A homely pub with a horseshoe bar, a good range of ales and accomplished food, The Royal Oak provides a perfect pit stop to follow a trip to the flower market (or visit during the week when things are a bit less hectic).

Accessible via a side street off the main road, Ye Olde Cheshire Cheese is a Fleet Street icon, rebuilt in 1667 after the Great Fire, the Samuel Smiths pub has a rich history, favoured by the likes of Mark Twain and Charles Dickens. It’s also worth noting that the chain steers away from large corporation spirits and soft drinks. Instead, everything served here is produced by the North Yorkshire brewery, from the competitively priced beers through to crisps, peanuts, and pork scratchings. Swearing is also banned.

The Prospect of Whitby, Wapping

Said to be the oldest riverside pub in London, The Prospect of Whitby dates back to 1520. With a rich history – notoriously frequented by pirates, smugglers, and thieves – the pub’s original flagstone floor and rare pewter-topped bar remain, while sweeping views of the Thames are offered from most seats in the East London pub (as well as from the beer garden and balcony). Now owned by Greene King, the food and drink offering is fine, if not revolutionary, but the view and history make The Prospect of Whitby a must-visit.

The Prospect of Whitby can be found at 57 Wapping Wall, London, E1W 3SH.

Dating back to the 16th century, Sir Ian McKellen’s pub has a rich history, perhaps most famous as a favourite of Charles Dickens, whose novel ‘Our Mutual Friend’ references the East London venue. With draped ivy, etched glass, wood panelling, and a dark colour pallet, much of The Grapes’ ‘olde worlde’ character has been retained, while sweeping view of the Thames are also offered alongside a fair range of classic ales and a food menu specialising in British pub grub.

Just across the road from The Five Points Brewing Company (on the landmark ‘five points’ junction), The Pembury Tavern was taken over by the brewery and relaunched in 2018. With a fresh look, the historic East London pub now serves a ‘New York Neapolitan pizza’ menu alongside a selection of soft drinks, wines, and 22 (!) lines of beer across cask and keg, including beers from independent breweries across London and the UK, plus Five Points’ entire range (including their superlative Railway Porter).

The Pembury Tavern can be found at 90 Amhurst Road, London, E8 1JH.

On the north-eastern tip of Victoria Park, The People’s Park Tavern is “a pub for the people, inspired by the people”. As well as having one of the biggest and best beer gardens in East London, the pub offers bottomless bunch, food from a BBQ kitchen, drinks from a pop-up cocktail bar, and a strong events programme. The venue is also home to an on-site microbrewery – Laine Brew Co. – which offers a good range of classic and contemporary styles, poured alongside a fair selection of standard issue beers.

Brick Lane has been so heavily regenerated over the past 20 years, besides various institutions (namely those serving food and drink) the street is almost unrecognisable. Down a cobbled side street, The Pride of Spitalfields is a 19th century pub offering a glimmer into the old East-End that’s largely lost. With net curtains, a loud carpet and wood-burning stove, the tiny pub is cosy and particularly charming, named CAMRA East London Pub of the Year in 2013, serving a fair selection of well-maintained beers.

The Pride of Spitalfields can be found at 3 Heneage Street, London, E1 5LJ.

The Duke of Richmond, Hackney

Chef Tom Oldroyd’s East London pub, The Duke of Richmond, takes its food very seriously. While a very good drinks selection is served, available to be enjoyed with a packet of Monster Much or Chipsticks, like in a classic local pub, the food menu is particularly special. Changing with the seasons, an a la carte menu showcases some very accomplished cooking, while the Sunday roasts are unsurprisingly fawned over.

The Duke of Richmond can be found at 316 Queensbridge Road, London, E8 3NH.

Between Bow Road tube station and the Bow flyover, it’s almost impossible to miss The Bow Bells. Painted in bright orange, the East London pub’s exterior is louder than its namesake, though the inside is a little more sedate. Another old-fashioned East-End pub, The Bow Bells has been here since 1860s, though the interiors have since been updated. As well as being a popular destination to watch sports (with Sky Sports and BT Sports events shown), The Bow Bells is now one of the closest pubs to West Ham’s new home ground, and is thus popular with fans. Four real ales are served from the bar, while a selection of craft beers and classics are also offered.

London’s first 100 per cent vegan pub, The Spread Eagle opened in 2018, launched as a rebirth of one of East London’s oldest pubs. With all food, drinks, fixtures and fittings sourced sustainably and plant-based, the pub boasts a central bar and traditional seating alongside a heated terrace. While the drinks offering is impressive, the vegan food is the main draw here. An entirely vegan festive menu will also be served throughout December.

The Spread Eagle can be found at 224 Homerton High Street, London, E9 6AS.

While the building dates back to the 1700s, The Jerusalem Tavern – in its current incarnation – has only been open since the 1990s. Not that you’d know, given the pub’s charming rustic interiors. The London outpost of Suffolk’s St Peter’s Brewery has a great beer selection, serving the brewery’s full range. Their cream stout, in particular, is a must try.

The Jerusalem Tavern can be found at 55 Britton Street, London, EC1M 5UQ.

On the site of an old brewery near the Barbican Centre, The Jugged Hare has a prominent focus on good food. Game is particularly emphasised in both the food menu and the pub’s décor. Named after a recipe dating back to the 18th century, expect a parade of seasonal dishes which may include the likes of crumbed pheasant, squirrel croquettes, and the pub’s namesake. Sunday roasts are also worth sampling here, as are the bar snacks – best washed down with a pint of Jugged Hare Pale Ale.

The Jugged Hare can be found at 49 Chiswell Street, London, EC1Y 4SA.

Particularly popular amongst Belgian beer enthusiasts, The Dove serves a huge selection of beers, with a strong focus on Trappists on draught and bottled. As for the food, the menu champions Thai food alongside vegan options such as ‘tofish’ and chips. An ideal pub for a quiet midweek drink or at the weekend while visiting Broadway Market, when the pub is far livelier.

Having been welcoming customers for almost 300 years, The Princess of Shoreditch used the first national lockdown for a long overdue refurbishment. Eventually re-opened in September, the East London pub has welcomed the new era with chef Ruth Hansom taking over the kitchen. With the refurbishment overseen by Tibbatts Abel, the ground-floor area is a space for casual dining and drinking, while the 28-cover upstairs dining room showcases Ruth Hansom’s modern British cooking, with the seasonal menu championing British ingredients all locally sourced and ethically produced.

The Princess of Shoreditch can be found at 76-78 Paul Street, London, EC2A 4NE.

A refined Hackney pub, The Marksman’s interiors are both stylish and comfortable, while the drinks selection is impressive. The food is the main draw here, however, with the pub having been named Michelin Pub of the Year in 2017 (the first London pub to earn the title). Famed for its contemporary British menu, former St JOHN chefs Tom Harris and Jon Rotheram have become particularly renowned for dishes such as beef and barley buns with horseradish cream. Sunday roasts are a must-try, too.

“Founded in 1851 on Bethnal Green Road and reborn through renovation and restoration in 2014,” The Sun Tavern is owned by the group behind Discount Suit Company. Here, classically-inspired cocktails are served, while the bar also boasts London’s largest selection of Irish whiskey and Poitín. Food is also offered, and local breweries are championed, with a good selection of taps serving the likes of The Sun Tavern’s own pale ale, brewed by Portobello Road Brewery.

The Sun Tavern can be found at 441 Bethnal Green Road, London, E2 0AN.

Towards the Walthamstow end of High Road Leyton, William The Fourth is a large Victorian corner pub, with many of the original features having remained following a recent refurbishment. A good range of beers and local ales are served, also available to be enjoyed in the pub’s beer garden, while Vietnamese street food is served by HANOI KITCHEN.

Built on the site of a former medieval Dominican friary during the 19th century, The Blackfriar’s architecture is particularly distinctive. Saved from demolition in the 1960s, following a campaign spearheaded by poet Sir John Betjeman, the pub is festooned with stained glass, sculptures, mosaics, and wooden reliefs, while low lighting adds to the venue’s character. A good selection of ales are served, while the breakfast, lunch and dinner menus have a prominent focus on British pub classics.

The Blackfriar can be found at 174 Queen Victoria Street, London, EC4V 4EG.

Built in 1850, The Culpeper took over The Princess Alice in 2014. Now set over three floors, the East London venue is home to a ground-floor pub, first-floor restaurant, accommodation, and a rooftop greenhouse, which grows some of the produce used in the kitchen. While the gorgeous pub space is fairly casual, the upstairs dining room is a little more refined. In addition to the accomplished food menu, beers range from continental draught lagers through locally brewed and bottled beers, plus cocktails made using herbs grown onsite.

The Culpeper can be found at 40 Commercial Street, London, E1 6LP.

This article was updated on Monday 7th December, 2020.