These are the best pubs in central London. 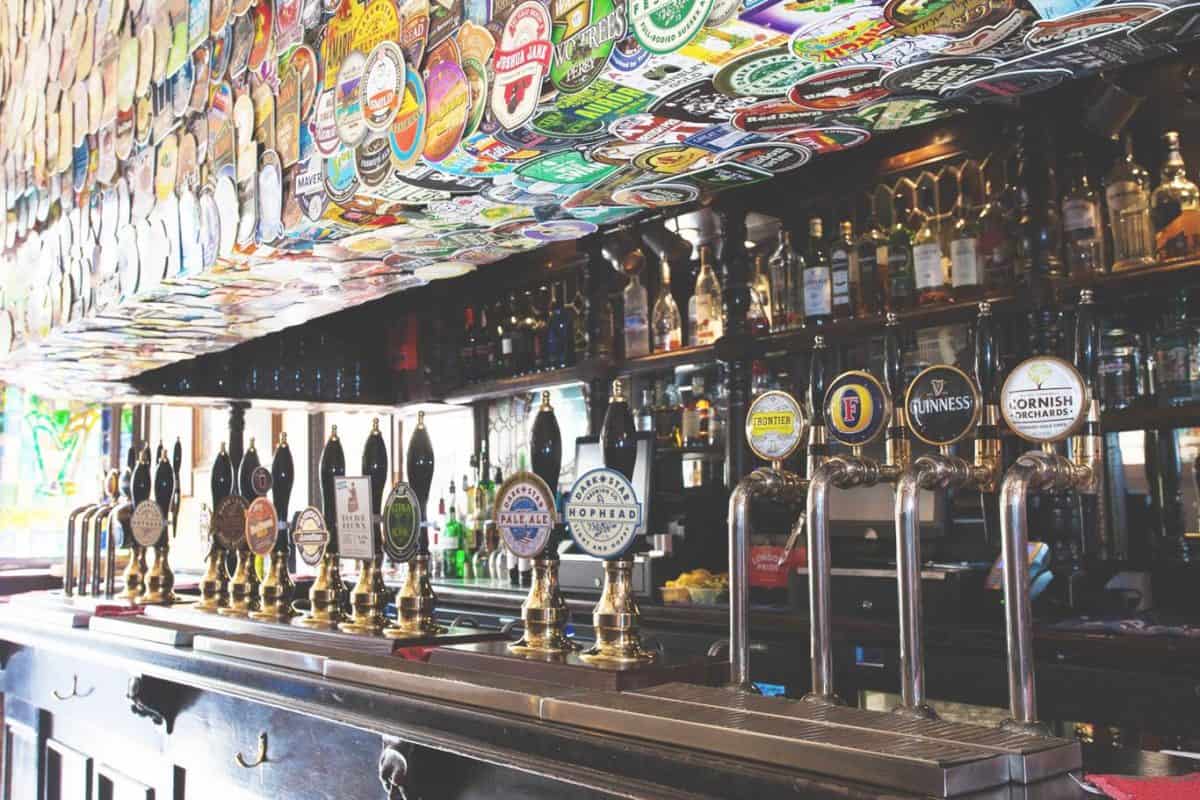 A cornerstone of society, the pub has played a vital role in British history for many centuries. While classic pubs continue to be celebrated (in the UK and beyond), countless establishments have disappeared from our villages, towns, cities, and high streets. Now, more than ever, these institutions rely on our support, most notably due to the extraordinary strain caused by the ongoing effects of the coronavirus pandemic. Hundreds of excellent examples continue to operate, however, and they’re in need of as much support as possible. As businesses continue to re-open with lockdown restrictions easing, we pick the best pubs in Central London.

Unlike so many central London pubs, The Harp doesn’t focus on food. Instead, the key emphasis is the very nature of the traditional British pub: drinking. A relatively small venue near Charing Cross station, The Harp boasts gorgeous stained glass windows as well as 10 hand-pumps along with guest brews, ciders, and perries from around the country. The first London pub to win the Campaign for Real Ale (CAMRA) National Pub of the Year competition in 2010, The Harp has also won the West London CAMRA Award every year they’ve been eligible to enter since 2006, and for good reason.

The Harp can be found at 47 Chandos Place, London, WC2N 4HS.

A Soho institution, opened in 1891, The French House has become particularly renowned for its food offering in recent years. Originally opened by Margot and Fergus Henderson in 1992, the dining room is now run by chef Neil Borthwick, who serves a regularly changing fine dining. Downstairs, the pubs is unashamedly classic, with no TV, music, or mobile phones allowed in the bar. Moreover, beer is served in half-pint measures, and a good number of wines are served by the glass.

The French House can be found at 49 Dean Street, London, W1D 5BG.

One of a few Coach & Horses pubs in central London, this Soho pub is known for once having “London’s rudest landlord,” Norman Balon. Today, the Fuller’s owned pub is much friendlier. With wood panelling and a loud carpet, the pub is also home to a piano, around which sing-alongs are hosted. As for refreshments, a standard range of Fuller’s beers are poured.

Just off Oxford Street, near Tottenham Court Road tube station, Bradley’s Spanish Bar has occupied its small site since the 1960s. Split over two floors, the pub has a cosy basement with an original vinyl jukebox, while Spanish drinks are showcased, including beers such as Estrella, Alhambra, and Barcelona Pale Ale.

A Grade II-listed pub off Hatton Garden, Ye Olde Mitre is a small, homely pub with 1930s décor. In addition to dating back to the 1770s (though a pub has been here since the 1500s), Ye Olde Mitre has featured in a number of films, including Snatch. Owned by Fuller’s, the pub has a reasonable beer selection and serves an assortment of bar snacks and toasted sandwiches.

One of the largest bars in London, The Porterhouse – from The Porterhouse Brewing Co. – is set over three main levels, with mezzanine levels in between. The Irish brewery’s Covent Garden pub has a particularly strong drinks selection, including all of their own beers, a good selection of draught and bottle beers, plus a strong cocktail list. The brewery’s remarkable oyster stout is an absolute must try, brewed with fresh oysters shucked into the conditioning tank.

Dating back to the mid 1700s, The Blue Posts is an original Georgian pub, now owned by the team behind restaurants such as The Barbary and The Palomar. With a destination restaurant, Evelyn’s Table, in the cellar and an upstairs wine bar, The Mulwray, the pub is a Grade II-listed free house, specialising in British craft beers. Rotating taps of independently brewed cask ales are available alongside lagers and ciders, plus a selection of bar snacks of note.

The Blue Posts can be found at 28 Rupert Street, London, W1D 6DJ.

Sister to the Dove on Broadway Market (one of our favourite pubs in east London), The Dovetail has been operating from a small site near Farringdon station since 1999. Here, Belgian beers have a prominent focus, with plenty on draught, joining an excellent range of bottled beers, including 19 Trappists. A Belgian beer lover’s paradise.

The Dovetail can be found at Passage Cafe, 9-10 Jerusalem Passage, London, EC1V 4JP.

A gorgeous Victorian pub towards the Piccadilly end of Soho, The Lyric is a million miles from the chain pubs of nearby Leicester Square. Inside, the space is welcoming, with classic wood panels, open fires, and Victorian prints. As for the drinks selection, a very good beer offering is served from a total of 18 taps, including classic and unusual draught and cask beers, plus a collection of bottled beers and ciders.

The Lyric can be found at 37 Great Windmill Street, London, W1D 7LT.

The model for the “Proles” pub in George Orwell’s Nineteen Eighty-Four (also featured in Keep The Aspidistra Flying), The Newman Arms played a role in London’s 20th century literary scene. Dating back to 1730, the pub was taken over by Truman’s Brewery in 2018 – the brewery’s first pub opening since being re-founded in 2010, now operating from a site in Hackney Wick. A perfect place to sample the east London brewery’s ales, The Newman Arms also has a food menu specialising in pies.

The Newman Arms can be found at 23 Rathbone Street, London, W1T 1NG.

Of all the Sam Smith’s pubs in central London, Princess Louise is arguably the most impressive in terms of interiors. Harking back to the golden age of the public house, it looks as though it should be in Hackney or Tower Hamlets rather than on High Holborn. From the etched screens, to the marble pillars and intricate tiling it’s all very opulent. Even the urinals are fancy. The standard range of Sam Smith’s drinks are offered and, as usual, they’re priced competitively.

Given its location in one of the city’s biggest tourist hot spots, The Cross Keys has a charming local pub atmosphere. Easily noticeable with its front covered in foliage, the inside is filled with bric a brac, displaying everything from oil paintings to brass instruments, to a napkin signed by Elvis Presley. The drinks selection is fine, the staff are friendly, and the food is basic and inexpensive, with generous sized portions. Perfect for a post/pre-dinner drink.

The Cross Keys can be found at 31 Endell Street, London, WC2H 9BA.

The Dog and Duck, Soho

Although licensed from 1734, The Dog and Duck’s current building was built in the late 1800s. With an ornate Victorian interior, the pub was regularly frequented by George Orwell during the 1940s, and the upstairs dining room has been named in his honour. Owned by Nicholson’s, the central London pub boasts a decent selection of beers and ciders, plus an unpretentious food menu rooted in pub classics.

A Samuel Smith’s pub in Fitzrovia, The Champion was built during the mid 1800s and is festooned with the Victorian accents expected from the Yorkshire brewery’s venues. While the drinks selection is limited to the brewery’s own, drinks are relatively inexpensive (especially for central London). The Samuel Smith’s stout is a must try, as are the brewery’s fruit beers, for something a little different.

Part of the Hall & Woodhouse Family, The Ship & Shovell is the only London pub in two halves. With entrances on either side of Craven Passage, the two buildings are only connected by a tunnel which contains the kitchen and cellar. A charming traditional pub in the heart of central London, The Ship & Shovell serves a good drinks selection, with a particular focus on well-kept Badger Beers brewed in Dorset

On the cusp of North London and the West End, The Lamb has been operating for almost 300 years. Now owned by Young’s, the pub has a particular focus on cask and craft beers, while the food offering is fairly typical of classic British pubs. Although the pub has been refitted, classic features include a polyphone, Hogarth paintings, and etched glass screening above the bar. The no TV policy is also refreshing, adding to the pub’s antiquated charm.

The Lamb can be found at 94 Lamb’s Conduit Street, London, WC1N 3LZ.

Another one of Sam Smith’s central London pubs, The Lyceum Tavern occupies a site next to The Lyceum Theatre. As is typical of the brewery’s pubs, the interior is charmingly antiquated, the drinks selection is limited to the Yorkshire brewery’s own range of drinks, and the prices are very competitive considering the location.

The Old Coffee House does begrudgingly serve coffee, but the venue is actually a classic Soho pub. Allegedly the birthplace to the mod movement, the Beak Street pub (just off Carnaby Street) dates back to 1772. Inside, the space is a bit stuck in the past, yet that’s part of its charm, while the drinks offering includes pub standards alongside a range of beers from  Brodie’s Brewery in Leyton.

The Old Coffee House can be found at 49 Beak Street, London, W1F 9SF.

Rather than being named in tribute to the Game of Thrones character, or the face of Channel 4 News, John Snow on the corner of Broadwick Street and Lexington Street is named after Dr John Snow, the man who showed the world cholera was carried and spread by water. A replica of the water pump responsible for a huge epidemic now lives outside the pub, while inside the Samuel Smith’s venue is bedecked with typical wood panelling, carrying the brewery’s range of drinks. Ideal for a drink before or after dinner at the original BAO.

One of the very few buildings to survive the Great Fire of London, The Seven Stars dates back to the early 17th Century and is claimed by some to be the oldest surviving pub in London. Just behind the Royal Courts of Justice, the small central London venue is a classic London pub, with a decorative Victorian bar-back and a resident cat, serving a fair selection of cask ales and a competent food menu.

The Seven Stars can be found at 53 Carey Street, London, WC2A 2JB.