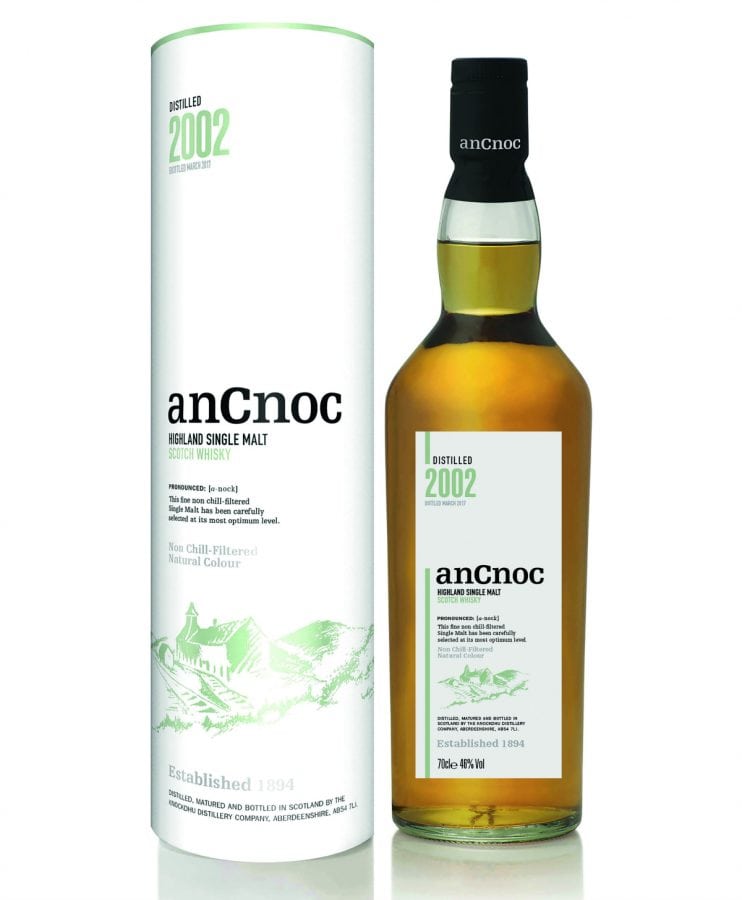 Part of the Inver House Distillers portfolio, anCnoc is produced at Knockdhu Distillery in the picturesque village of Knock, Aberdeenshire. First established in 1894, Knockdhu Distillery remains one of the Scottish Highlands’ smallest distilleries. Previous anCnoc expressions such as anCnoc 18-year-old have been subject to much praise amongst single malt enthusiasts, with the brand having become renowned for providing whiskies with a contemporary twist. Furthermore, the 18-year-old expression was awarded the title of Best Highland Single Malt in the 13-20-year-old category at the World Whisky Awards last year.

Speaking about the introduction of anCnoc 2002, brand manager Stephanie Allison said: “We’re really excited to release the 2002 vintage to anCnoc fans as it creates the perfect balance between the signature Knockdhu house style we’re so proud of whilst introducing new tastes into our portfolio. With the combined spicy notes and sweet flavours, we’re sure this spirit will satisfy even the most discerning whisky drinker looking to extend their collections.

With just 1200 cases available globally, anCnoc 2002 is produced in a style that’s changed very little over the past 113 years. The whisky is distilled in original style copper pot stills with worms to condense the vaporised alcohol – a rarity in the 21st century. The liquid is then aged in hand selected Spanish and American oak casks, matured in traditional dunnage warehouses. Finally, the whisky is bottled in its natural form, non chill-filtered and naturally hazy. Bright amber and sticky, this anCnoc 2002 has prominent aromas of vanilla, licquorice, toffee, some spiciness and orange zest. Elsewhere, on the nose anCnoc’s alcohol potency is somewhat misleading. On the palate, further citrus notes are joined by more vanilla, plus sweetness of chocolate and marshmallows. The whisky’s sweet notes are then balanced by some leather and oak notes before ending with a long, slightly sweet finish.

An ineffably smooth dram with relatively high alcohol by volume (46 per cent), anCnoc 2002 is a complex whisky, harbouring a taste that seems ironically modern given the dated production technique – best served neat.