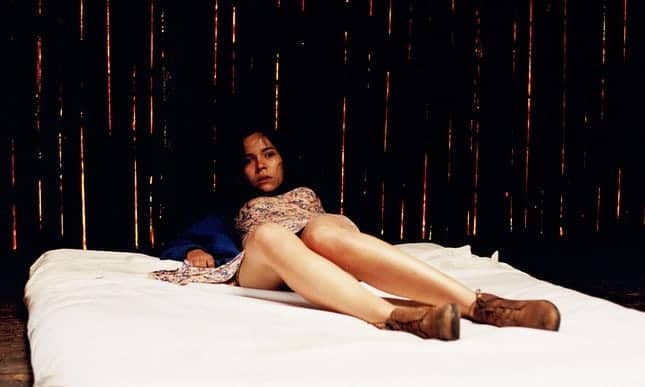 Also in the picture is Veronica a young woman enjoying a sexual revolution (of sorts) with an otherworldly being that is being hosted in a secluded cabin and resembles a cross between the Alien from Alien and an octopus. The two threads run concurrent to each other before awkwardly overlapping and resulting in dire consequences.

The problem with Escalante’s film begins with its English language title which promises more than is actually delivered. All its tentacle porn shock value to one side, The Untamed is, in fact, fairly tame. Ultimately though, the film lacks cohesion. One can’t help, but feel this is two films in one. On the one hand it is a social realist exploration of sexual frustration, liberation and domestic abuse within the Mexican context, albeit a somewhat superficial one that offers up no real new insight into the issues it tackles, and on the other it’s a moody, sexual sci-fi flick. Amat Escalante tenuously ties the two together using the flesh toned tentacled extra-terrestrial, with its insatiable sexual appetite and lack of sexual identity, as a rather heavy handed metaphor for the themes at greater play and as a result the film suffers.

The meat of the story comes from the love triangle between Alejandra, Ángel and Fabián. The exploration and consequences of those relationships are where the film could have packed a real punch, evolving into something of greater substance that carried greater weight. Instead, you find yourself wondering about the couple who host the otherworldly being, two hippies fulfilling a modern take on the mad scientist role, who understand the dangers of the creature, but continue to feed it fresh lovers, the motivation of which is never fully explored.

The film has the staple social realist aesthetic. The world and existence of its characters is painted in the muted colours of the ever day with just the right amount of grit, but all this is distracted by the woozy, ominous sci-fi interjections. Ruth Ramos puts in the strongest performance as the downtrodden casualty of her husband’s repressed sexuality and who upon discovering his infidelity is both broken hearted and given the chance of a new beginning.

The Untamed is two films that never fully delivers on either, an interesting, if somewhat unsatisfying addition to Escalante’s filmography.

The Untamed is on release from Friday 18th August.