By Anna Power There’s no doubt that this best-selling teen romance novel now brought to the screen is a film of two distinct halves. The first is a very pleasant teen love story, which charms and captivates, the second sees the onset of a plot about to take a nose dive into territory that’s a […] 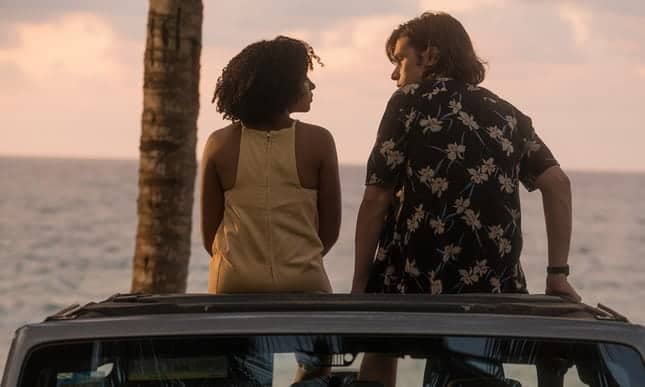 There’s no doubt that this best-selling teen romance novel now brought to the screen is a film of two distinct halves. The first is a very pleasant teen love story, which charms and captivates, the second sees the onset of a plot about to take a nose dive into territory that’s a whole lot tougher to swallow – no matter how hard you try.

They say that a spoonful of sugar helps the medicine go down and for sickly teenager Maddy (Amandla Stenberg) that comes in the form of gorgeous new boy next door Olly ( Nick Robinson) who arrives like a gift just in time for her 18th birthday. The two lock eyes Romeo and Juliette style as she glances down from her window on him moving in next door and they are instantly mesmerized by one another and it’s infectious. It helps of course that they are both young and beautiful, Maddy is wide eyed and perfectly pretty, glistening with white cotton innocence. Olly has that scruffy unwashed floppy hair that is the teenage boy stuff of dreams and a nervous vulnerability perfectly offset by a pessimistic outlook and need to wear black.

Maddie suffers from SCID similar to Jake Gyllenhaal’s Bubble Boy, which presents a challenge for the young fledgling romance as it means she’s allergic to everything and must be confined to her environmentally controlled house. The two embark on a relationship from their perfectly opposing bedroom windows utilizing technology in all forms to connect untill eventually they are able to meet face to face. The use of tech is really well done including an Annie Hall nod at their first meeting complete with neurotic subtitling over awkward flirting. It’s all very pleasing to watch as the two bright young things connect over art and mathematics, flexing their intellectual muscles with speedy topic shifts and witty banter that flows effortlessly between them.

Nick Robinson gives a subtle tender performance as enamoured Olly, and his turbulent homelife and role as protector of his mother endear us to him even further.

The second half of the film brings domestic trials and challenges for the two. Maddy’s mum (Anika Noni Rose) is also her Dr and beset by trajedy in her life – namely the loss of her husband and son in a freak accident – so Maddy is her entire world. Caring or controlling? We think the latter – and this is where the film takes a distinct turn for the worst into an ever increasingly bizarre plot that seems entirely unconvincing.

In spite of the obvious flaw of the increasingly bizarre storyline, Everything Everything still has a lot of charm and you find yourself rooting for these characters inspite of the absurd situation they find themselves in.

Everything Everything is in cinemas from Friday 18th August.