16 year old Iona (Lily Newmark) and her mother Lyn (Joanna Scanlan) have just moved to a new town. Iona, wanting to be part of the crowd, says that she has become friends with the popular girls in her class. Eventually she gets invited into the group but they, particularly Keeley (Sacha Cordy-Nice) treat her […] 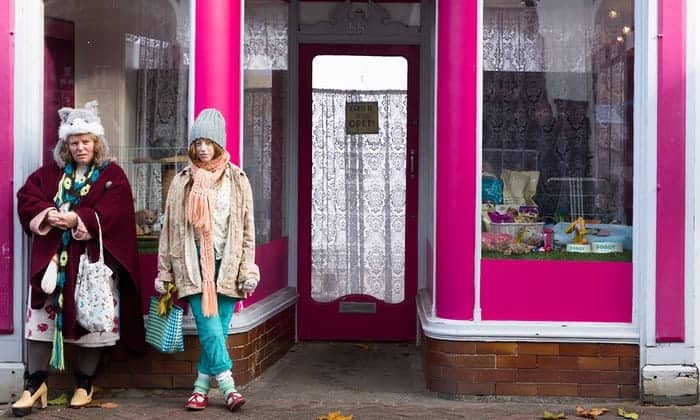 16 year old Iona (Lily Newmark) and her mother Lyn (Joanna Scanlan) have just moved to a new town. Iona, wanting to be part of the crowd, says that she has become friends with the popular girls in her class. Eventually she gets invited into the group but they, particularly Keeley (Sacha Cordy-Nice) treat her more as a frenemy. Meanwhile, the reclusive Lyn is also being treated badly by the neighbours. The bullying on both sides threatens to undermine Iona and Lyn’s closeness and makes them both retreat into fantasy for comfort.

With its hand stitched title card, the introduction of Joanna Scanlan’s eccentric mother character with her shoes, one heel higher than the other to compensate for her hunched gait, and its first fantasy sequence, Pin Cushion starts out looking like it might be a quirky, even twee, coming of ager. That might be fun enough for 80 minutes, but Deborah Haywood’s film soon reveals that it has deeper, darker and more resonant concerns.

It’s often difficult, trying to find your place in the world. That’s ultimately what Pin Cushion is about. We get the feeling that Lyn has never managed it, that she’s accepted that at some level, retreating into herself and into her extremely close relationship with her daughter – they call each other Dafty One and Dafty Two and, at least early on in the film, still share a bed. Iona, perhaps aware that however much she loves her, she doesn’t want to be her mother, is trying hard to find her place, but she’s clearly so sheltered that she’s too trusting; an easy mark for the casual cruelty kids are capable of.

The scenes between Iona and her ‘friends’ are the moments that ring most true. The conversations, trying to one up each other or to embarrass the person with less experience when talking about sex, flow in a way that feels entirely natural and almost unscripted. The bullying storyline hits hard, thanks to Lily Newmark’s excellent central performance. Newmark is incredibly striking; pale and beautiful in an offbeat way that you believe would draw both good and bad attention to her, she plays Iona with a quiet fragility that hints at a lot going on under a surface she’s trying very hard not to show cracks in.

What’s impressive is that writer director Deborah Haywood manages to fold the fantasy sequences into these moments in a way that also feels real. I think we’ve all been in a place where, during a moment we’d like to escape, we’ve wished ourselves away into an idealised version of that reality. This comes across strongly when we see Iona’s fantasy version of her mother, the one she initially tells the girls is real: a glamorous stewardess played by Girls Aloud singer Nadine Coyle. As the cruelty of her friends becomes more pronounced, Iona’s fantasy world becomes ever more important, granting her a place where both she and her mother are more sure of themselves and able to win battles they can hardly even fight otherwise.

Pin Cushion manages throughout to chart a beautifully blackly comic path between being very sad and its quirkier moments that do raise genuine laughs. Haywood combines these tones most interestingly in Lyn’s side of the film, with her escalating confrontations with a neighbour who refuses to give back the step ladder Lyn lent her and Lyn attending a support group that turns out to be anything  but hitting comedy and tragedy perfectly in the same instant. Joanna Scanlan walks the same tightrope equally well in her performance, and is especially good when, after a party at which many things get broken, she seems to lack either the words or the will to tell her daughter off.

I hope that teenagers will be able to seek out Pin Cushion in its limited release, because it’s a deeply felt work that seems to zero in with both wit and empathy on their day to day experiences. There are moments here that threw me right back to my own schooldays, even to specific incidents where I saw the same dynamics play out between my friends (male and female) and I’m sure that will be as true for people who are coming at this film at the same point as its characters. Amongst a strong cast, Lily Newmark stands out as a name to watch for the future and I’ll be keeping an eye out for Deborah Haywood’s next film.