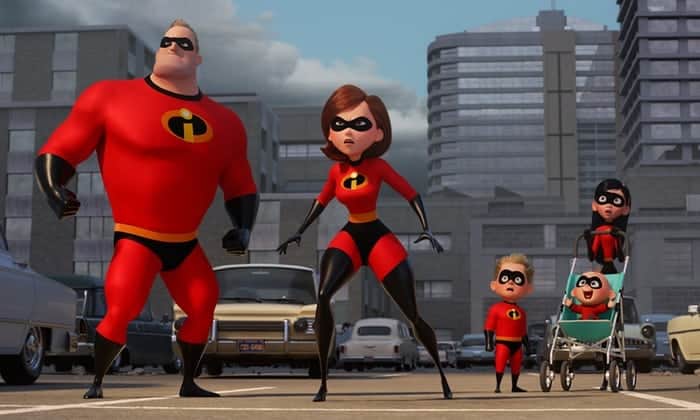 It has taken Pixar nearly 15 years to deliver a sequel to the much-loved Incredibles, which is an eternity in cinema. When Bob “Mr Incredible” Parr (Craig T Nelson), Helen “Elastigirl” (Holly Hunter), Violet (Sarah Vowell), Dash (Huckleberry Milner) and baby Jack-Jack (Eli Fucile) appear on screen, literally seconds since the original film ended, it feels as if they have been frozen in time, waiting for us to join them once more and to offer the audience the notion that “nothing has changed” which feels a very Disney idea to be pushing.

Was it worth the wait? Well, sort of.

Writer/director Brad Bird delivers a storyline that operates in the same ball-park as the original with the Parr family living under a democratic order that prevents them from using their powers, essentially banning all superheroes. Cue well-connected supporter and billionaire Winston Deavor (Bob Odenkirk), and his sister Evelyn (Catherine Keener) to step in and offer the Parrs a shot at societal redemption. Using his company, Devtech, Winston plans to launch a major publicity campaign that will showcase superheroes in a much more positive light which will turn public opinion and remove the ban placed upon them.

The first switcheroo that stems from this is that Elastigirl is the one chosen to rebuild the superheroes’ image and not Mr Incredible. With Elastigirl working on restoring superheroes’ image, a conveniently placed villain called the Screenslaver is giving her something to fight against. The action set-pieces are done well but typical of Pixar’s output there is little sense of real jeopardy and although the set pieces do help move the narrative forward they do feel a little like an afterthought. This is due to a lot of the film being devoted to narrative exposition and the role reversal of Elastigirl and Mr Incredible, which gives the film a pace that can only be described as clunky.

The film does contain a stand out moment; a confrontation between Elastigirl and the Screenslaver, taking place in a pitch-black room lit by strobe lighting. I was genuinely impressed with the animation on screen and the visual delight the effect had created. I have not felt similarly about a Marvel or DC superhero film in the same way for a long, long time.

The character that gets the most onscreen time is Mr Incredible himself and the journey his character goes on in the course of the film is ambitious but at the same comfortably familiar. Bob struggles with being a stay-at-home Dad, unable to comprehend Dash’s math homework or offer the right advice for Violet’s boy trouble. He calls in reinforcements in the help of Edna Mode (Brad Bird) and the few scenes Edna is in, the jokes land harder and faster than at any other point in the film.

Incredibles 2 is not a perfect film in the way the original felt like it was and the original has a better villain and a better backstory, but there is a level of warmth and charm to proceedings that elevates the film from ‘underwhelming’ to ‘fine’. There is not the level of brilliance on show as there was in Pixar’s Inside Out or Coco, and when you’ve waited nearly a decade and a half for a follow up to a film so widely adored as the original Incredibles is then I don’t think “fine” is enough. A fun family film, but you can’t help feeling shortchanged when the credits roll.