By Caroline Howley The mighty Danube slices cleanly through the centre of the city, divorcing rural, residential Buda from its hip urban neighbour, Pest. The elaborate landmarks of the riverbank shimmer, reflected in the water: Buda Castle, sat high on its rocky foundations; Liberty Bridge’s giant green girders towering over the retro trams that pass below; […] 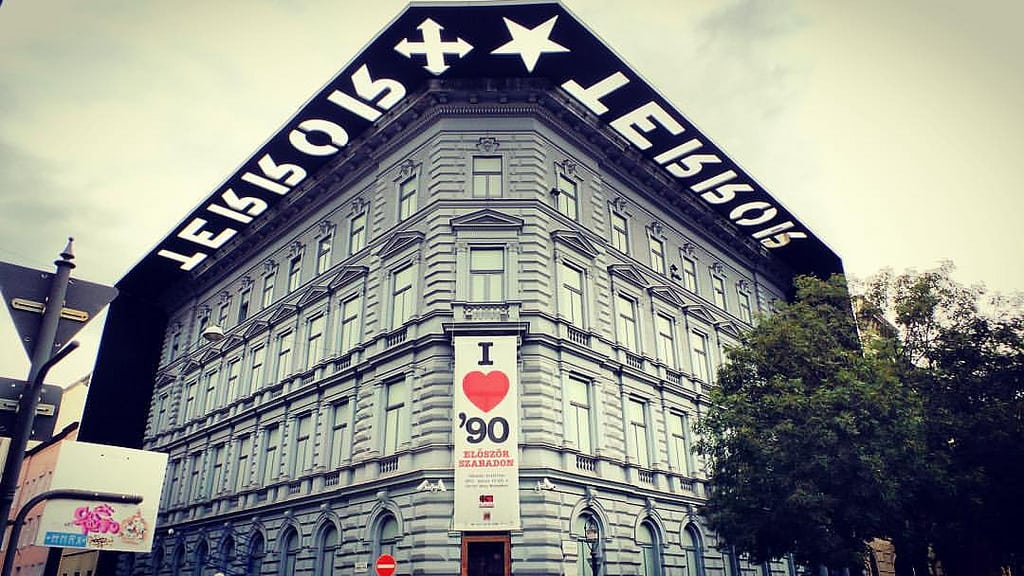 The mighty Danube slices cleanly through the centre of the city, divorcing rural, residential Buda from its hip urban neighbour, Pest. The elaborate landmarks of the riverbank shimmer, reflected in the water: Buda Castle, sat high on its rocky foundations; Liberty Bridge’s giant green girders towering over the retro trams that pass below; the intricate spires of the neo-gothic parliament buildings piercing the clear azure sky.

The castle and its banks are a proud UNESCO World Heritage Site, the fairy lit ruin bars of the city’s Jewish Quarter crawl with hyperactive stag parties, and Budapest’s iconic Turkish baths are packed with revellers floating in wave pools and glistening in saunas. Millennials cycle up and down the banks of the Danube on vintage bikes.

From this vantage point – especially on a sunny day – it’s difficult to image the Budapest that once was.

The streets now lined with painfully cool bars and boutiques were once populated by colossal statues of communist heroes; the people who walked them terrorised by secret police.

In 1956, the anti-Soviet uprising saw troops fire into crowds of protesters, the streets beneath the burgundy Parliament domes awash with the blood of dissenters. The ruin bars – now a vibrant tourist hotspot – were once a meeting place for creatives and counter-revolutionaries plotting against the regime. Even the iconic castle sits atop a throne of secrets, it’s grandiosity masking the horror that occurred so recently in the caves and tunnels beneath.

These days Budapest is a breathtakingly beautiful, unique city that wholeheartedly deserves its place among other top European destinations. But when visiting, take the time to dig under the idyllic surface, and you’ll find a world of terror and intrigue hailing from just over half a century ago. Here are my top picks of Budapest’s communist attractions.

The House of Terror: The home of the secret police 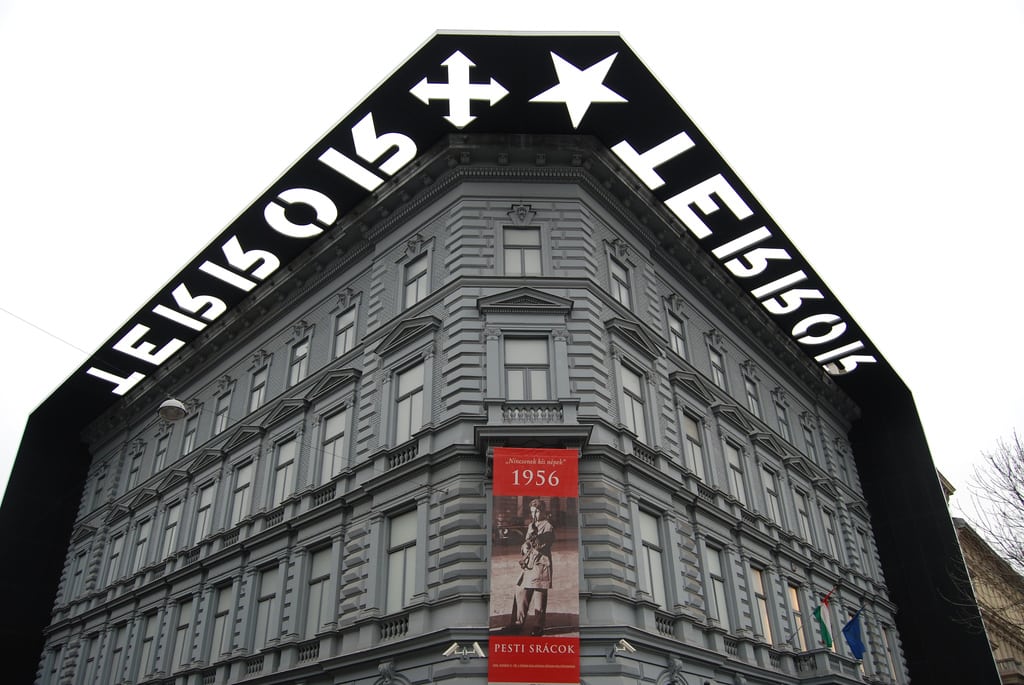 At times the headquarters of the terrifying Arrow Cross Party – responsible for the murder of approximately 15,000 citizens, many of them Jews and Romanians, and the Soviet Union’s Hungarian secret police, the shadowy House of Terror lives up to its unnerving name.

The Museum is designed to unsettle and confuse those brave enough to enter; from muted lighting and ominous music to slowly-revolving mannequins in ACP uniform and a maze built from blocks of soap, visitors will get a minuscule taste of what it was like to live in a disorienting era where not even your own family could be trusted.

Wandering the museum, you will discover the office of Gabor Peter – the petrifying head of the Hungarian political police, who himself ended up behind bars in 1953 due to Stalin’s anti-semitism.

As is perhaps betrayed by its name, The House of Terror is not the most enjoyable attraction you’ll visit in Budapest. It is nevertheless invaluable for those keen to delve into the city’s turbulent modern history. When you emerge from its gloom back into bustling, multicultural Pest, you’ll look at the city through different eyes, with a visceral understanding of how different it must have been to walk these streets just 40 years ago. 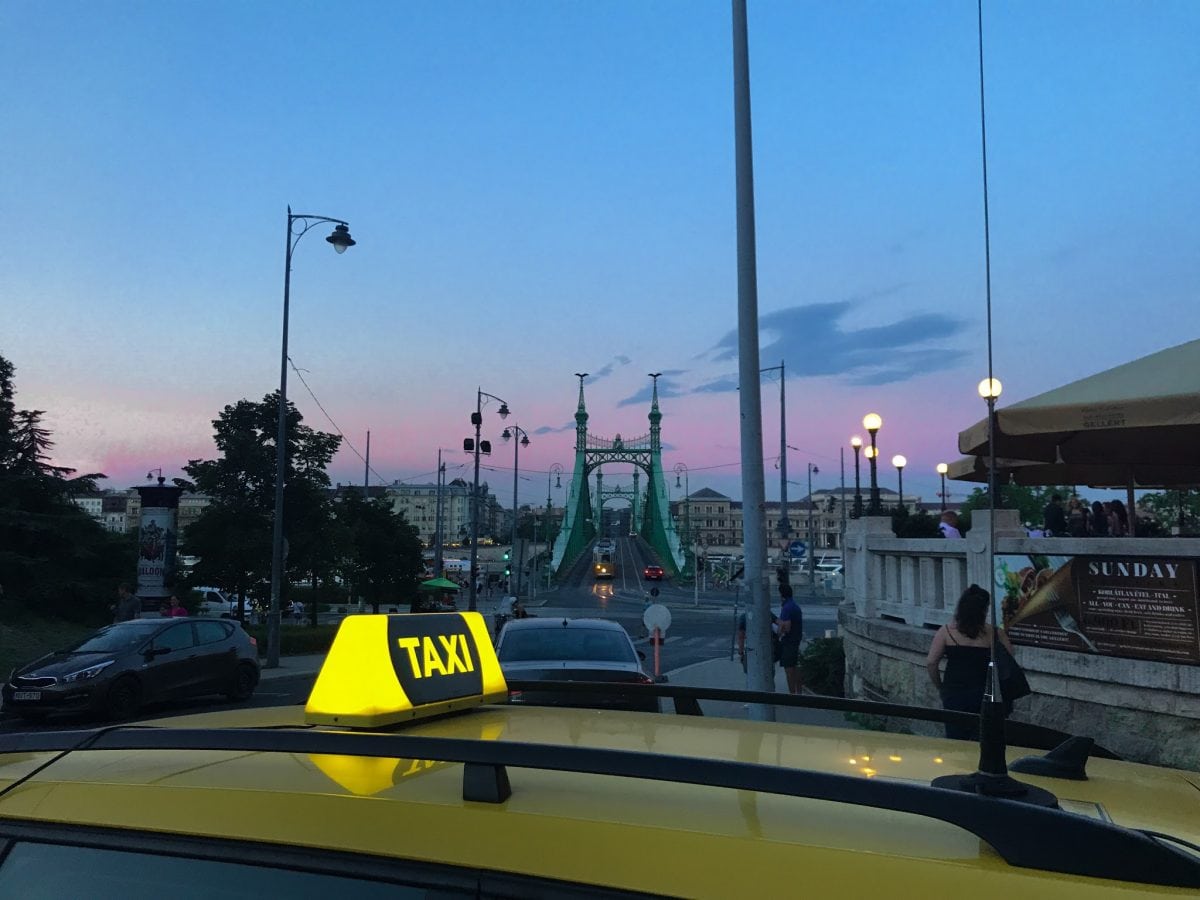 If you fancy a stroll through bustling Pest, Liberty Square is an convenient location firmly on the ‘Red Budapest’ route.

Here visitors will also find a monument dedicated to the Soviet liberation of Hungary from Nazi German occupation during World War II: the point at which the nation’s people swapped one oppressive regime for another.

The grandiose square also boasts a number of buildings in the Art Nouveau style, and is home to the US Embassy.

The Hospital in the Rock: An eerie underground time capsule 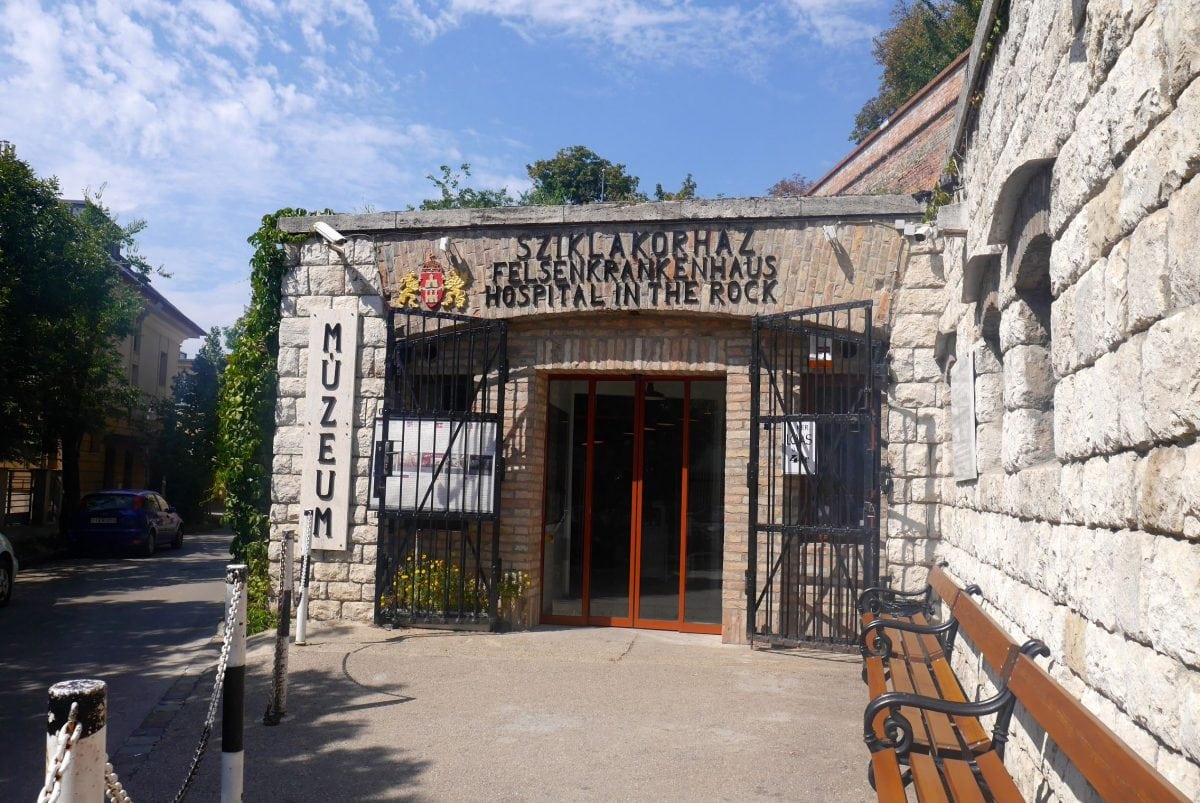 Descend to the chilly depths of the Hospital in the Rock, and I’m sure you’ll agree: it’s really weird.

Deep beneath picturesque Buda Castle Hill lies a grotesque makeshift hospital dating back to World War II. The emergency care unit was installed in a section of the interconnected caves and tunnels that stretch for approximately 10km (six miles) underneath Budapest.

The claustrophobic hospital was actively used during World War II, and then became operational once more during the Hungarian Revolution. As a Red Cross post, it was used to indiscriminately treat people from both sides of the conflicts.

After watching a jumpy video about Budapest during the Second World War and the Hungarian Revolution, you’re invited to don a grey winter coat and follow a guide down a narrow tunnel to the eerie hospital. Just over half a century ago the creaking infrastructure of this institution was overwhelmed by wounded soldiers. Many were operated on in terrible, unhygienic conditions, and a lack of beds meant recovery often took place on the cold stone floor. These days, the underground wards, operating rooms – and even toilets – are populated by uncanny mannequins, clothed in wartime garb and decorated with wounds.

Untouched since it was last used in 1956, the space still contains gruesome mid-century operating tools and bottles of medicine. Watched by the collection of mannequins, visitors are regaled with a variety of harrowing wartime tales, such as how at times volunteers would have to risk their lives by leaving the hospital to collect snow that could be melted for water.

After visiting the hospital, visitors venture deeper into the labyrinth to see the nuclear bunker which was constructed there during the Cold War. By the time it was completed, it had been made redundant by the development of the hydrogen bomb, and would never be used. Exploring this sinister room, truly feels like stepping back in time. 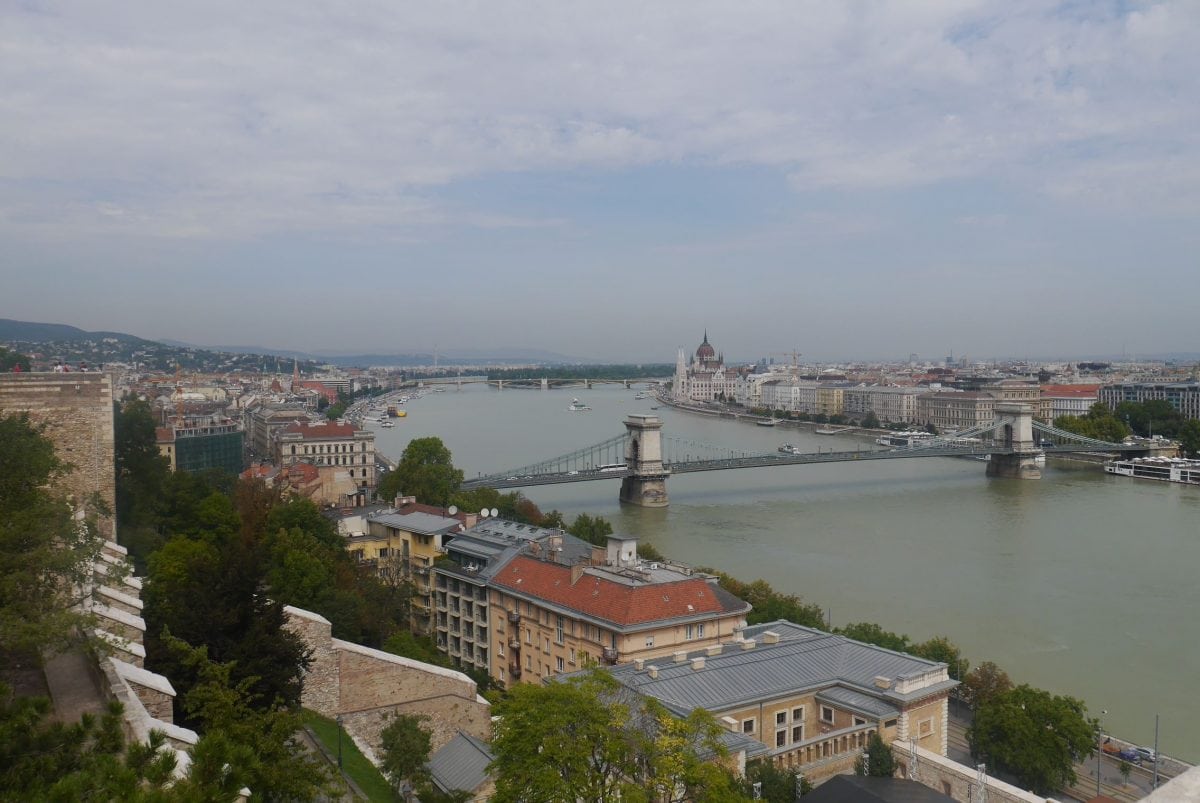 Buda Castle sits on a pile of golden rocks; an unexpected and striking part of the city’s skyline. Overlooking Budapest from its lofty perch, it is impossible to miss, immediately drawing the eye of locals and tourists alike.

The opulent castle might initially seem a little out of place on a list of Communist attractions – and indeed, the Soviets detested everything it represented, considering it a symbol of the former regime. Once in power, they ripped down the more ornate features that had managed to survive World War II, and replaced them with simpler, modern designs.

The original Royal Palace dates back to the 13th century, but over the years the various battles that have played out in Budapest have violated the city’s iconic landmark and it has been rebuilt and repaired several times.

The castle played a central role in recent conflicts – and was also the site of one of the biggest Hungarian military disasters in history. In 1944, it became the last major stronghold of Axis forces during the siege of Budapest, with the German and Hungarian forces that occupied the castle attempting and failing to destroy the Soviet blockade that was encircling them. The heavy fighting completely decimated the once-grand castle.

Despite the conflicts, the castle has retained its imposing beauty, and is a must-visit for anyone in the city for the first time. Surrounded by beautiful gardens and magnificent statues, the castle provides an incredible viewpoint from which to survey the rest of the city. Now a peaceful site, it is incredible to think that it was once at the heart of such intense conflict.

Memento Park: Where communist leaders are laid to rest 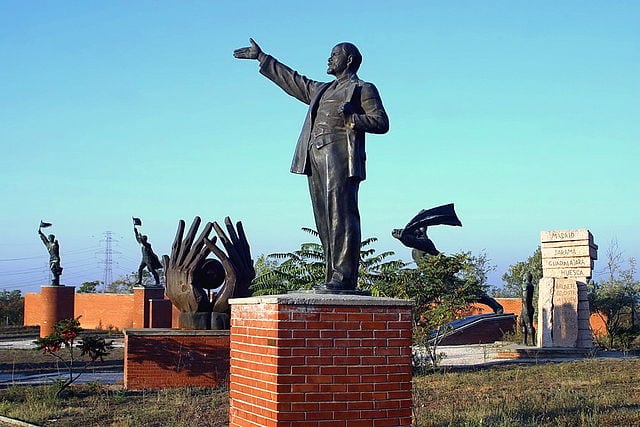 Memento Park is the place to go for a glimpse into the gigantic ghosts of Hungary’s communist past.

The huge statues that once stood in the city to remind Hungarians of the regime they lived under have since been transported to this open air park. It contains statues of Lenin, Marx and Engels, in addition to other Hungarian leaders.

After meandering round the park, visitors can sit in the iconic Trabant 601 – the famous “people’s car” of East Germany. On the communist hotline, pick up the phone to listen to speeches given by Lenin, Stalin, Mao and even Che Guevara. There are also often exhibitions which explore the propaganda and operations of communist Hungary.

The Children’s Railway: An odd locomotive run by solemn kids 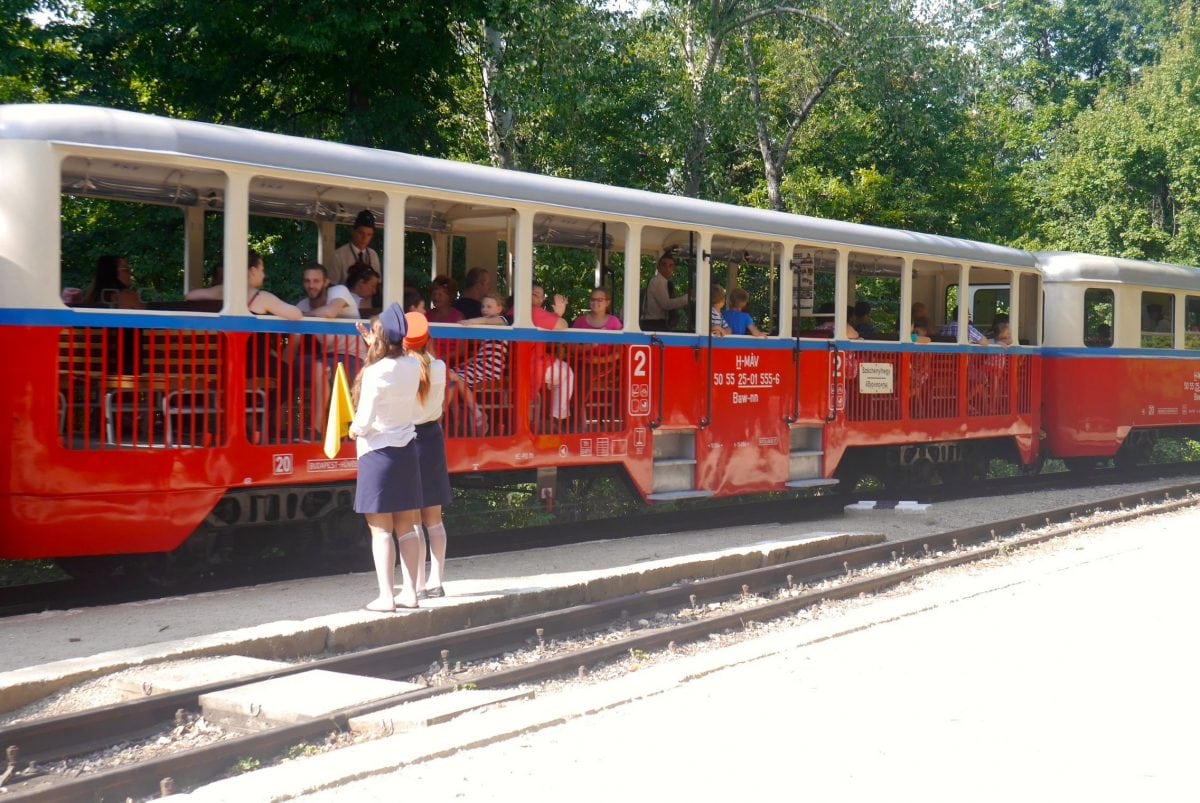 Unlike the other attractions along the red Budapest route, the Children’s Railway – or Gyermekvasut – is still very much in operation.

High in the Buda Hills, nestled among endless greenery, is a rail system almost entirely operated by children and teenagers. Built just after World War II, the unique locomotive was a brainchild of the Soviets.

Upon arrival at Szechenyi-hegy station, visitors are greeted by a solemn child in a smart blue and white uniform who will furnish them with tickets for the journey on the shiny red and white contraption. A number of kids wave colourful flags from the platform, one of them blows a whistle, and you’re off! Again, it’s a bit of a bizarre experience; the children take their jobs extremely seriously, but it’s not at all unpleasant.

The train trundles at a speed of 12 mph through the verdant scenery of Buda Hills. Stops include Csilleberc, where you can enjoy the thrill of a zip-line and Janos Hill – the highest peak in Budapest, where you can catch a chair lift for a tranquil ride back to the bottom.