“I can’t even find 90 minutes to watch the football. Distractions are our enemy. Focus is our friend." 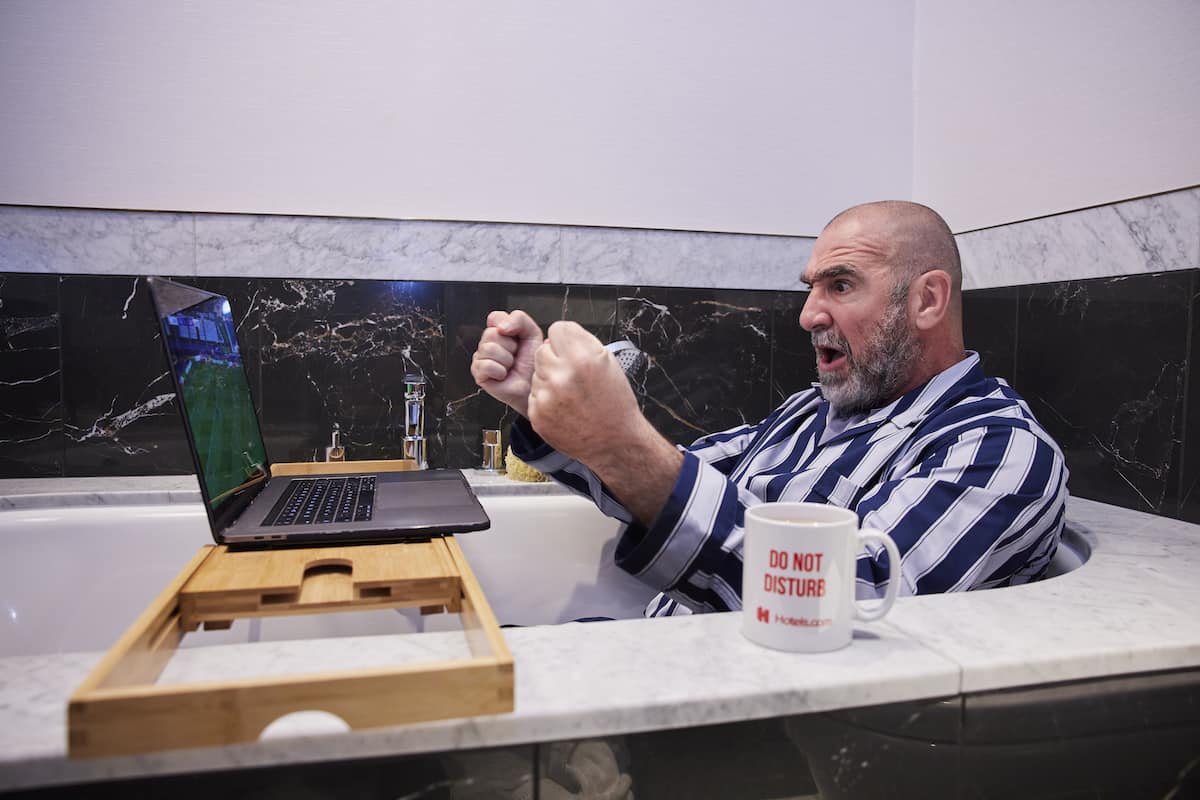 Manchester City will face Chelsea on May 29 in the all-English tie, which is scheduled to be played in Turkey.

And retired ace Cantona, 54, has teamed up with Hotels.com to provide one person with his unique blend of hospitality and football knowledge for the final.

The website is offering ‘Do not Disturb’ suites for just £20.21 at four luxury hotels in the UK and five in Europe – allowing fans to enjoy the clash in uninterrupted fashion.

Cantona will be working at one of the hotels, preparing the room and then waiting on-hand to discuss tactics throughout the game, as part of his very own brand of five-star hospitality.

The former footballer has created a tongue-in-cheek video showcasing why it’s so important football fans can escape for some well-deserved ‘me time’ to watch the UEFA Champions League Final.

He said: “Life is full of interruptions and being stuck at home during the pandemic has only made this worse.

“We’ve got no space to ourselves and absolutely no ‘me time’, this is definitely true in the Cantona house anyway.

“I can’t even find 90 minutes to watch the football. Distractions are our enemy. Focus is our friend.

“I wanted to help find peace and with Hotels.com this is my gift to you. We’ve created the Do Not Disturb Suites so that you can finally watch the beautiful game without distractions. Relax and let the game begin.”

Hotels.com has picked four hotels in the UK which have a football link, including The Lowry in Manchester – where PSG stayed ahead of their defeat last week against Man City, and where Jose Mourinho called home during his tenure as Man United boss – and Chelsea Harbour Hotel, which is walking distance from Stamford Bridge.

The Hilton St George’s Park, at the home of English football and the Dixie Dean Hotel in Liverpool, which is inspired by a footballing icon are also available.

The unique ‘Do Not Disturb Suites’ will be prepared so guests can relax in their hotel robe in complete privacy, and enjoy the biggest game in club football, with rooms featuring large TVs, king beds and peace and quiet.

Each booking also comes with £100 of room service.

All visitors will also receive a luxury kit bag filled with goodies such as a Cantona-crafted Do Not Disturb sign, a robe, slippers, an eye mask for a pre-match nap, mini toiletries for a post-game bath, along with football scarves, red and yellow cards and a miniature UEFA Champions League trophy.

It follows research by Hotels.com which revealed two thirds of UK football fans would like to book a hotel room to escape pandemic life, while the same figure (66 per cent) wants nothing more than an evening of watching their favourite TV show in peace.

Almost half (44 per cent) say they’ve had to deal with more interruptions during the pandemic than in normal life, with 43 per cent reporting that they’re interrupted every hour they’re awake.

The majority (51 per cent) say they’re interrupted most often by their partner, followed by their kids (38 per cent), whereas dogs (25 per cent) and cats (18 per cent) aren’t far behind.

Emma Tagg, Head of Global & EMEA Brand Communications at Hotels.com brand, added: “We know it’s been impossible to find any ‘me time’ during the pandemic, and when we found out more than one in three fans have not been able to enjoy their football without constantly being interrupted, we wanted to reward them for their patience with this great escape.

“Alongside King Cantona, we’ve created the ultimate viewing experience for one of the biggest nights in the football calendar.

“Fans can now give unwanted interruptions the red card, as our ‘Do Not Disturb’ suites’ are fit for football royalty, with peace and quiet guaranteed.”

The ‘Do Not Disturb Suites’ are available for £20.21 for one night to celebrate the 2021 UEFA Champions League Final taking place in Istanbul, Turkey. There are 45 suites available to book – five suites per hotel.

*Football enthusiasts can find the new ‘Do Not Disturb Suites’ at the following hotels exclusively via Hotels.com at www.hotels.com/page/donotdisturb/