In Luang Prabang for a whirlwind stay? Here's what to see and how to get the most of your visit. 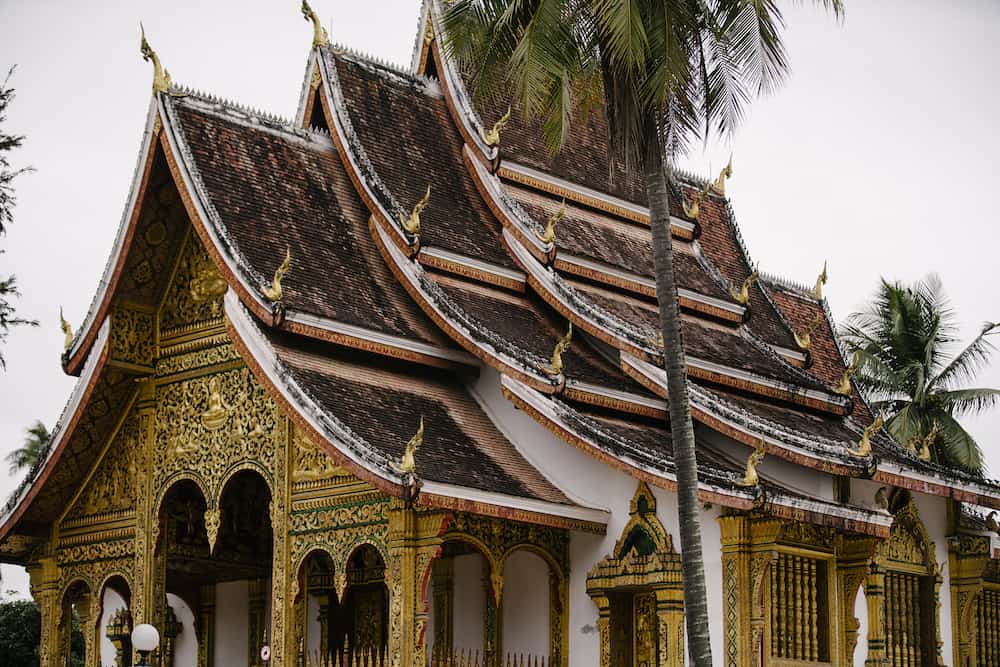 The capital of Laos, Luang Prabang, is fast becoming a fixture on any grand tour of Southeast Asia. That’s not only because it’s managed to keep an authenticity beyond its status as a Unesco World Heritage City (rare is the place in which market traders don’t hassle you). It’s also rich with culture, heritage and natural wonders that makes for a constantly surprising stay – you’ll forever be marvelling at a new French colonial house, or a new type of street food that may or may not be made with insects.

A week in Luang Prabang is enough time to take in its main sights at a reasonable pace. But if you’re on a whirlwind tour, stay energetic enough and it’s possible to get a good measure of it in 48 hours. Here’s what to see and how to see it.

Hike up to the Wat Chom Si Shrine

Dominating the view in Luang Prabang is Mount Phou Si, a tall hill that juts up from the centre of the city, and is a welcome sight for passengers touching down at Luang Prabang Airport. A walk to the top is marked by a wondrous amount of features: bridges fashioned like ancient dragons; the sight of young Buddhist monks sharing an off-duty joke, and the Wat Tham Phou Si Shrine, built within and around large tree trunks as with Angkor Wat in neighbouring Cambodia. At the very top, it’s the gilded beauty of Wat Chom Si Shrine that impresses the most – and it’s also the spot for the best skyline snaps of the city.

I was a guest of Avani+ Luang Prabang, which was a blessing, largely because of its slap-bang central location: 15 minutes from the airport, right at the start of the Night Market, and within a few minutes walk from the Mekong River and the nightlife. All of that is ideal you’re on tight schedule. It helps that once you’re through its doors, you’re transported into an urban sanctuary, with an outdoor 25m pool, hearty restaurant and rustic bar to watch the world go by. It means it won’t be hard to recharge the batteries before the next venture out.

Get a natural pedicure at Kuang Si Waterfall

For a trip away from it all, grab a towel and togs, and make your way to Kuang Si Waterfall. Within a towering forest, mineral-filled aquamarine water comes cascading down, forming a number of natural pools. Especially on a sweltering day, it’s impossible to resist a swim. Or dip your toes to try out the ‘natural spa’: hundreds of the tiny fish that nibble at dead skin live within the waters, making for a unique, if odd, experience. It can get busy in peak season, so visit early to avoid the afternoon rush.

On the way to the waterfall, you’ll pass by Laos’ only buffalo dairy farm. Backpackers may have noticed that cheese is a rarity in Southeast Asia, but in Laos buffalos have been used for their might and their meat for centuries. Enter a Susie Martin and her partners, who set up Laos Buffalo Dairy in order to help buffalo-owning families generate extra income, give the people an extra source of nutrition, and improve the welfare of village animals. You can visit it and see the herd in action, or just stop buy for a delicious, dairy-filled meal. While the company are well-known for their inventive ice cream flavours (think matcha tea and lemongrass), the cheesecake is beyond delicious – so save room!

Peruse the markets – if you dare

All throughout the city’s main streets, you’ll see street vendors with skewers of barbequed meats – look closely enough and you’ll recognise some as splayed rats or whole, little birds. If that’s distressing, definitely don’t go to Luang Prabang’s morning market. For lily-livered vegetarians such as I, it’s an oddly fascinating line-up of dead things, dying things and alive things that will soon die – all slotted in between sellers of luscious bunches of herbs or vibrantly coloured vegetables. There’s bee larvae to be grilled and eaten, and a death row of ducks. Further down, you’ll see skewers of large insects, and slithering eels try to escape their bowl. It might feel a little much for 7am, but that’s travelling life for you.

For a more serene affair, the night market takes place daily from 5pm-11pm. Hundreds of stalls sell a surprisingly tasteful collection of clothing, art, trinkets, jewellery (some made out of upcycled bullets) and food gifts – just keep an eye out for the tequila bottles with a pickled snake inside, lest it cause PTSD from the morning market visit…

Wake early for the Alms giving

Just as sun rises, the streets of Luang Prabang turn remarkably calm and busy. Families come out and line the side of the streets with offerings of food for the monks, and tired tourists stand a distance away to observe. In their bright saffron robes, the monks make their way through the town, collecting offering that form their food for the day. Hotels like Avani prepare food for guests who want to take part in the ceremony – just remember to take advice on the customs to stay respectful.

Lined by the Mekong River on one side and dissected by the Nam Khan River, Luang Prabang is rich with wildlife and jungle. There’s lots of ways to see its natural side, but on a short trip, the relaxing Mekong Kingdoms Luxury Cruise serves the double function of sightseeing while indulging in a little decadence. Cocktail in hand, sail along the Mekong to see Laos’s hazy sunset, as well as rare birds and wild buffalo drinking from the banks.

Shilpa was a guest of Avani+ Luang Prabang