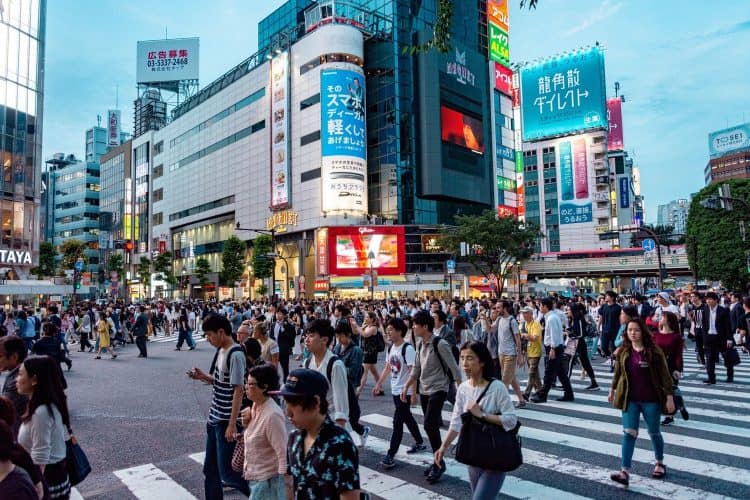 I step out of a battered white taxi that looks like it’s been on the road longer than The Rolling Stones. As I reach to slam the door shut, it catapults closed of its own doing. Then the other doors follow, like dominoes, as the rest of the passengers stream out. Two minutes ago, I’d wound a window up by hand.

This is Japan, of course, and I’m in the dazzled-by-everything mode I imagine all new visitors go through. This time it’s the 80s cab’s self-shutting doors. The day I arrived, it was when the coach driver said he knew a good spot for dinner and took us to a 7:11 (he was right).

I’m here with a group of other Brits on a ski-come-city break led by Inside Japan Tours. Tyler, our guide, greets us at the airport. A wide-smiling American, armed with a slick haircut and an encyclopaedic knowledge of Japan, he’s been living in Tokyo for over 15 years. His love of the country couldn’t be more evident unless he had “I love Japan” tattooed across his forehead.

After a 12-hour flight from London, an almost two-hour plane ride from Tokyo to Sapporo and a two-hour bus ride, we arrive at our first hotel at Hoshino’s Tomamu ski resort. What immediately stands out is Tomamu The Tower’s two hulking structures that could’ve been craned in from a suburb of Milton Keynes. They resemble giant, stacked up Rubik’s cubes and look bonkers plonked in the Japanese wilderness. Strangely, like most things in Japan, it works.

We’re staying next door in the fancier but equally lanky Tomamu Risonare Hotel. My suite comes with a hot tub and blinding views of the surrounding mountains. The resort has six excellent restaurants, self-operating beer machines, a spa, 200 suites, the cutest library you’ve ever seen, and incredibly cold passageways. Skiers come here for the premium powder that floats in on a frosty Siberian wind each winter, and despite it being an off-year for snow, there’s still plenty of it. For a novice skier, the slopes are a dream – long, meandering, scenic affairs that wind down the mountain gradually finishing at the hotel (it’s a ski-in, ski-out resort).

I spend my mornings attempting to ski and afternoons relaxing in my hot tub – watching from the 16th floor as other guests zip down hills that look ice cream peaks covered in chocolate sprinkles. By night, I polish off platefuls of sushi, teppanyaki and tempura prawns at the peaceful Forrest Restaurant Ninipuri. The massive buffet-style dining space, surrounded by stunning silver birch trees, looks a bit like London’s Barbican Centre due to its minimalist interior and brutalist aesthetic. On my final night, I visit the hotel’s library where I drink green tea and pretend to read a book that’s far too clever for me.

The next day, we drive to Asahikawa and check into Hoshino’s budget-friendly hotel, OMO7. Asahikawa, Hokkaido’s second-largest city, is an unassuming place, not necessarily a tourist destination in its own right, but a solid, working city often used as a layover. It’s also home to the Kawamura Kaneto Ainu Memorial Museum where we’ll spend our afternoon learning about Japan’s forgotten indigenous community, the Ainu.

The Ainu are said to be the first people to settle in Hokkaido (they also lived in Honshu, Sakhalin and the Kuril Islands). The ancient community of skilled fishers, hunters and foragers, lived in harmony with nature, worshipping animals and living off the land. The museum, established in 1916, is cold and scattered with jewellery, tools and photos of men with impressive beards. All hidden behind old-school glass cabinets.

There’s no books or writings as the Ainu never wrote anything down. Instead, their history was passed on through storytelling, like the one we’re about to hear. With a sorrowful look and pain in her voice, the Ainu lady running the museum performs a traditional folk tale. The story explains how the Ainu were oppressed and marginalised by Japan’s rulers: forced to learn Japanese, change their names, and stripped of their culture and traditions.

She tells us how important it is to her that she helps to preserve the Ainu culture as many generations of Ainu hid their ancestry through fear and stigmatisation, which led to a lack of awareness of these ancient people. Sadly, estimates suggest only 20,000 Ainu people remain in Japan, and their language is almost extinct – it’s thought that only two people can speak it in the entire country. Though the Ainu were recognised as indigenous people of Japan in 2019, which many hope will help preserve their culture.

The following day, we arrive in Tokyo where we’ll stay at one of Japan’s best hotels, Hoshinoya Tokyo. The imposing building, guarded by an elegant, black latticed façade, hulks over the capital’s business district of Otemachi where hurried salarymen dash between ordinary-looking, glass corporate buildings.

Once through the doors, our shoes go into bamboo boxes where they’ll remain until we return to the real world. The plush, five-star hotel is inspired by an 8th Century ryokan – a traditional Japanese inn where samurai warriors stayed. Centred around hospitality, or omotenashi, ryokans were Zen-like places with minimalist décor, comfortable beds and homecooked food, often close to hot springs. Hoshinoya is a ryokan on steroids. Every inch of the hotel exudes elegance and calm, from the blonde, woven tatami mats to the soft lighting and uncluttered lounges. It’s possibly the most beautiful hotel I’ve ever seen.

Each floor has an ochanoma – a living room where people can drink tea, read or socialise with other guests. Rooms come with elegant shoji screens (Japanese room dividers), sunken sofas, dining tables and yukatas (a type of casual kimono). Guests are invited to try the samurai yoga, tea ceremonies and rooftop onsen – a traditional Japanese bathhouse. I book onto a samurai yoga class, as I’ve longed to swing a stick around pretending to be a samurai warrior since I breached the age of 15 (it’s cute when you’re a child, but one of the fastest ways to get you arrested at 30-years-old).

As I eat breakfast before my class, an early morning light trickles through my room’s latticed shell, forming shape-shifting patterns on the wooden floor. I throw on my yukata and wander down to the reception area, where I’m given a black wooden stick and told to partner up. The teacher shows us some moves, twirling the stick around elegantly and I repeat, looking more like a drunk bloke waving a baguette.

With only one day left, Tyler takes us on a whirlwind tour of Tokyo (the biggest city in the world). Immediately, I’m awe-struck again. This time at just how clean the streets are despite the lack of bins. Then again, at the unique tunes played at metro stations, ranging from whimsical melodies and meditations to fairground tunes and phone alarms. Depending on who you speak to, it’s either a psychological trick to get commuters on and off the train promptly, stop people falling asleep, or make newly seated passengers feel relaxed.

We spend the day flitting from district to district: window shopping in the trendy Harajuku neighbourhood, ducking under selfie sticks in Shibuya and squeezing down ‘drunkard’s alley’, which is packed with ramshackle bars and sprinkled with tōrō lanterns, tangled electrical wires and steaming drains. A friend and I enter what could be the smallest bar in the world (big enough for five tiny people or one hefty sumo warrior). We sit almost nose-to-nose with a cranky bartender, drinking Japanese whisky while listening to 80s British rock into the night, then race back to the hotel for a dip in the onsen before it closes.

The natural geothermal bathhouse, located on the roof, draws hot spring water from 1,500 metres below the ground. I push through the doors of the men’s onsen (men and women are separate) and sit completely starkers on a tiny wooden stool with a flannel resting on my skull, pouring bucket after bucket of water over me. It sounds unpleasant (and perhaps it is to the bloke behind me) but it’s a strangely liberating experience. Hearing every drop of water as it washes over me and lashes against the floor is meditative.

After washing, I gently lower myself into the narrow pool in front of me, then wade through a tunnel that leads to a larger, shallow communal bathing area, skirted by columns of black marble that shoot up to the dusky sky sprinkled with stars. Floating on my back in complete silence, it’s hard to comprehend I’m in Tokyo.

This, however, is what makes Japan so special. It may be a cliché to say but just when you think you’ve seen it all, something, however subtle, odd or spectacular, blows you away again. For me it’s the country’s love of baskets, the high-rise ski resorts, buffets serving edible food, metro jingles, naked communal baths, and the knackered old taxis with self-shutting doors. For you, it could be something entirely different.

RISONARE Tomamu (risonare.com/tomamu/en/winter) from £148 per night
Tomamu the Tower (snowtomamu.jp/winter/en/hotel/tower) from £71 per night
OMO7 Asahikawa (omo-hotels.com/asahikawa/en/) from £32 per night
HOSHINOYA Tokyo (hoshinoya.com/tokyo/en) from £583 per night
InsideJapan Tours (www.InsideJapanTours.com) offers a range of expert-led small group tours across
ANA (www.ana.co.jp/en/gb/)