The Audi S8 is, without doubt, the best car people will pay absolutely no attention to. All the power and comfort, none of the fuss. 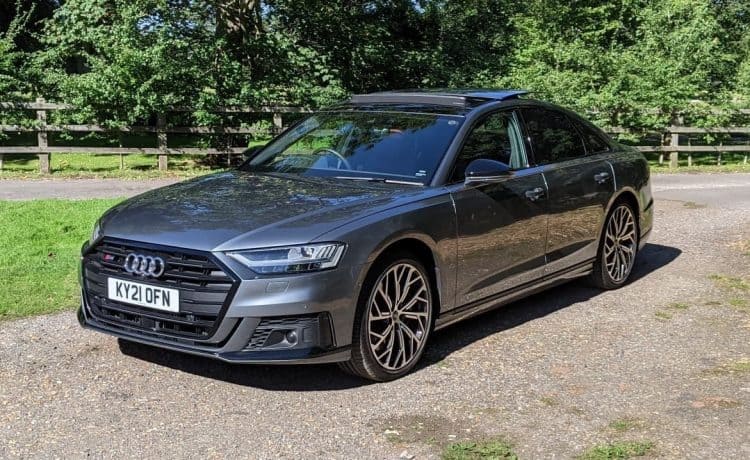 Sometimes it’s nice to fly under the radar. You can just waft along, doing your thing, not a care in the world. Going incognito for a moment is a pleasurable experience in a world driven by social media likes and interactions. The world is occupied by more grey men than we care to realise, so why not embrace that status from time to time? The Audi S8 certainly has.

It might sound an odd concept in the world of luxury motoring, but it’s quite nice just to go unnoticed for a while. Sitting atop the Audi range alongside the likes of the RS6, RS7 and RSQ8, the S8 is fitted with the same tubthumping 4.0-litre V8 engine as its siblings, producing 563bhp. It propels this unassuming limousine from standstill to 60mph in just 3.8secs. And yet it lacks the theatre, pomp and ceremony of its stablemates. The Audi S8 is focussed on refinement and is bashful by nature.

That’s not to say, however, that it’s boring. Because the driving experience really isn’t. It’s just understated at every turn. Inside it’s quiet to the point of being overly polite. The head up display is necessary because the Audi S8 suspends every notion of time and space; you’re often going faster than you realise. 70mph can feel like 20mph. The eight-speed ‘box keeps the rpm in check and you just serenely sail along.

Give it a prod, however, and the V8 happily makes its presence felt. A pleasing rumble permeates the cabin and the Audi S8 savagely pulls towards the horizon. Once you’ve got that out of your system, pop it back into Comfort+ mode and everything reverts to tranquillity.

I had the Audi S8 for a weekend which involved a drive from my home (Walton) to Chester and back. My wife was nine months pregnant at the time, so I had visions of needing to go all Jason Statham at some point and hare back home. Thankfully that scenario never came to pass, but on a long journey the S8 inspires total confidence. In fact, it’s difficult to overplay just how good this car is for long journeys.

When you need get going, it responds with purpose. Then it just settles into its rhythm without fuss. The cabin is cosseting, quiet and brilliantly thought out. It’s as understated as the exterior, an exercise in minimalism and clutter-free living. The 500-mile roundtrip passed without any frustration. There are few cars this good at just getting on with a long journey. It’s remarkably unremarkable.

What about getting the Audi S8 on a decent B-road?

Away from motorway cruising, the Audi S8’s refined demeanour also shows. On a more spirited drive, things are once again kept calm. The Audi S8 leans into bends to reduce lateral movement in the cabin and affords it handling capabilities that should really be beyond a car of its size.

You could chase a hot hatch down a decent country road, although the involvement levels are entirely different by design. I mean, the Audi S8 is, first and foremost, a luxury limo. It’s designed to cosset its passengers, not give them a white-knuckle ride. But, if you need to get somewhere quickly, it will step up to the plate and get you where you need to be.

Of course, movies play a big role in our perception of cars and the Audi S8, featured in Ronin and Statham’s The Transporter films, fits the bill in real life. A luxury limo with a V8 kicker, it drives pretty much exactly as you’d expect it to. Which is no bad thing.

What about everyday driving?

We’re not always haring across continents and countries though. Away from the fantasy world, our potholed and speed bumped roads are the mundane reality. This is where the Comfort+ setting comes into its own. The Audi S8’s predictive active suspension is pure witchcraft. Scanning the road ahead, it detects imperfections and speed bumps, preparing the car to mould itself over them. It means that you don’t experience the bump. It’s weird, but absolutely astonishing. The downside is when it misses one and you’re left to experience the ghastly impact.

There’s also adaptive cruise control, lane keep assist, parking assistance plus a Bang & Olufsen 3D premium sound system. Double glazing keeps things quiet in tandem with the Active Noise Cancellation system – this plays an opposite frequency to noise intrusions to keep things quiet inside. Again, it all adds to the experience. In any conditions, the Audi S8 is a fantastic place to be.

In fact, so impressive is the overall package that in struggling to find something to criticise I could only really fault the lack of air conditioning in the seats and the lack of a massage function. First world problems. In a car at this level, however, both functions might reasonably be expected. I could find neither in the configurator, where both were present in the Audi RSQ8 we reviewed previously.

Driving the Audi S8’s stablemates attracted a lot more attention. The RS6, RS7 and RSQ8 all drew interest from boy racers and drivers of rival marques. No one batted an eyelid at the S8. It packs the same performance as all three, but its subtlety means that no one notices.

In putting together a dream garage, there’s always room for a Q-car, or a sleeper. The Audi S8 fits the bill. The exterior is downright boring and deliberately so. The only flourishes are the S8 badges, the optional 21” wheels fitted to the model tested and the quad exhaust poking out of the rear bumper. Other than that, this car is the grey man.

The Audi S8 is very much worthy of an RS badge from a performance perspective, but Audi realises that’s ramping things up and the S8 is here to calm things down. If you want flamboyant styling and aggressive touches, they’ve got a car for that. If you want to fly under the radar and just get on with things, the S8 fills that void.

It’s very much at home on the motorway, covering long distances in an uncomplicated manner. It’s brutally fast yet also wonderfully refined. There’s nothing flashy about the Audi S8 and I came to love it for that. Sometimes it’s good to embrace your quiet side and just blend in. When you need a reminder that it’s just a façade, the V8 will sing for you. The ultimate Q-car? The Audi S8 could well be.