The Audi e-tron S is a seamless transition from combustion engine to electric vehicle – but what’s it like for a family holiday from London to Cornwall? 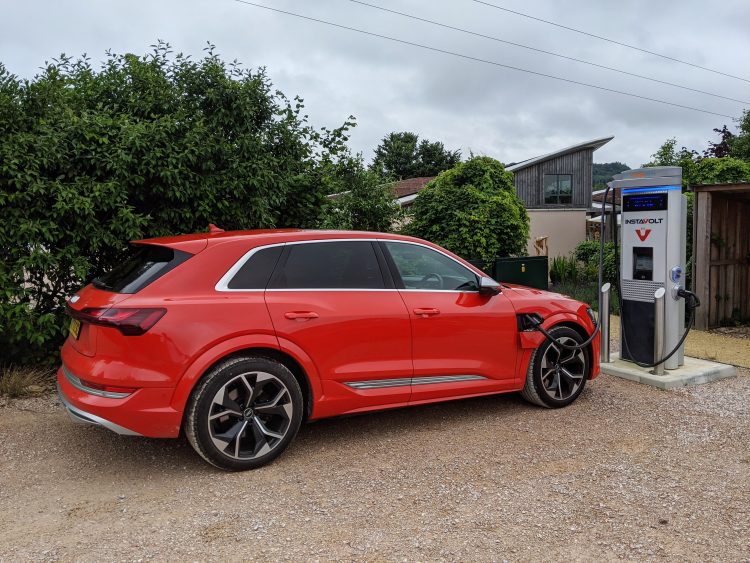 People love an SUV. Don’t ask me why, but the combination of high ride height, road presence and plenty of space is a seemingly intoxicating one. People also love a fast SUV, wanting all the practicality and space, combined with the performance you might reasonably expect of a well-heeled saloon. One thing the EV revolution is bringing about is stellar 0-60 times. In the Audi e-tron S, Audi has exploited the performance on offer from battery power in the ever-alluring SUV shell.

So, a guilt-free SUV? Well, that’s the idea. All the trimmings, none of the emissions. The downside arrives with the same predictability that it does with the vast majority of EVs: range. So, to put that to the test, to see how painful it really it is, we took the Audi e-tron S on a family holiday to Cornwall.

It was 256 miles from my home in Walton to Poltarrow Farm in St. Austell. With a stated range of “up to 221 miles” it was clear that at least one stop would be necessary. Cue the research of charging points.

Depending upon which app you use, you get given different options. On first viewing, the EV scene is an utterly befuddling one. Are you Type 2? Chademo? Combo? You’re definitely not Tesla, so avoid those sites.

What if the first charging stop is in use? Or broken? Best to have contingency plans in place. It’s certainly not as easy as stopping at whichever petrol station you happen to meander by first on the A303. I had range anxiety a fortnight before we even left.

As it happens, I needn’t have worried. We stopped at Wincanton with 80 miles remaining range and all chargers were free and functional. A trip to a well known fast food restaurant for a late breakfast and we were back up to 180 miles of range after 62mins of charging with 150 miles still to travel.

Another stop at Plymouth, where one of the two chargers was broken, but thankfully the other charger was just becoming free. 44mins charging got us from 80 to 150 miles range. It was a similar story on the way home, with one 10-minute wait for a charging slot and an easy stop at another.

I achieved average consumption of 2.3 miles per kWh, meaning that my average range for a full charge in the Audi e-tron S was 195.5 miles (2.3 multiplied by 85 kWh of available battery). InstaVolt and Shell Recharge were the best ones to use, in my opinion, in case you’re wondering. You can tap your contactless card on them, plug in and off you go. To end the charge you just tap your card on the machine again and it ends.

Using other chargers, Geniepoint and Pod Point, required entering card details online, which is particularly tricky when you’re in the arse end of nowhere without mobile phone signal. And do you really want app after app after app on your phone? Of course not. Keep it simple.

So, the cost. We’re led to believe that the EV revolution will be good for the consumer, with electricity being cheaper than petrol. If you can charge at home, it is. The average cost of electricity at home is 14.37p per kWh. Out on the road, it’s a lot more expensive, with 40p per kWh being the norm. For the Audi e-tron S, with 85kWh of available battery to call upon, that’s £12.21 to charge from 0-100% at home, or £34 to charge on the road. At the most expensive public chargers, costing 77p per kWh, that cost is £65.45. Yikes.

Highway charging is meant for top ups, with the bulk of the charging to be done at home. On a trip to Cornwall, this was impossible, although the kind folks at Poltarrow Farm let us charge the Audi e-tron S in one of their barns. Such is the changing face of how people get to them, they’ll soon be installing a charging point for guests.

My five charging stops cost £84.33. I was able to add 210 miles of range at the farm. Having covered 729.8 miles in total, minus those farm top ups, the equivalent cost of unleaded fuel calculated at 131p per litre and a fuel economy of 30mpg (easily achievable in most cars) would have been £103. If economy is your goal, that could be a lot cheaper, too. What price the four hours waiting for the car to charge, though? A six-hour return journey turned into an eight hour one.

Anyway, the charging infrastructure is what it is at the moment, and that’s not the fault of any car or manufacturer. What’s the Audi e-tron S like to drive?

Of course, that sense of theatre is missing, but in terms of serene progression, the Audi e-tron S is exactly what you’d expect of a big Audi. It absolutely glides along the motorway to the extent where a head up display to remind you of your speed would be useful – the e-tron S really does insulate you from any sense of speed.

This being the S model, it’s faster than the standard e-tron, with 0-60 taking just 4.5secs. The extra speed necessitates a reduction in available range, which is an odd compromise in some ways, since I tickled it down to Cornwall in efficiency mode to maximise the available range.

Once you hit country roads, as you’d expect, there’s no hiding the weight. 2.7 tons is plenty to shift around, and that’s before adding three passengers and a week’s worth of luggage. It stays composed enough along flowing B-roads, but this isn’t the sort of car you’re buying to enjoy that setting.

It’s the sort of car that you’re buying to transport the family around in, sometimes over long distances, which makes the range of c.195 miles a little bit frustrating. One definite positive of having an EV is the quiet you exude when driving through sleepy Cornish villages. There’s no pomp or ceremony, it just gently wheezes through, its surroundings undisturbed by its presence. The only drawback of this was on a drive through the tight, one-way streets of Fowey where pedestrians couldn’t hear you coming.

Range anxiety is not unique to the Audi e-tron S and the charging infrastructure isn’t yet in place to persuade many to ditch petrol or diesel and go electric. Going for the S and sacrificing range for performance will be a sticking point for many, but this obfuscates what the Audi e-tron S represents. This is such a smooth transition from ICE to EV. Battery technology will only get better and range will only improve. More chargers will be installed. It will, hopefully, get cheaper to charge out on the road, too. But this car shows what’s possible.

There are so many positives here. The Audi e-tron S doesn’t look like an EV, it looks like a natural extension of Audi’s range. Inside, it’s just like an Audi, too, with the familiar MMI cockpit and controls and the comfortable touches such as the sport seats, panoramic roof and Bang & Olufsen premium audio system. The Audi e-tron S is a superb fast SUV. That it’s an EV is either a help or a hindrance – it depends what you need. As we transition to electric powered cars, the e-tron S shows that it can be done seamlessly. This is, after all, what a lot of consumers want.