The Caterham Seven 420R sits in the middle of Caterham’s range, not the fastest, not the slowest, but perhaps the best? We find out 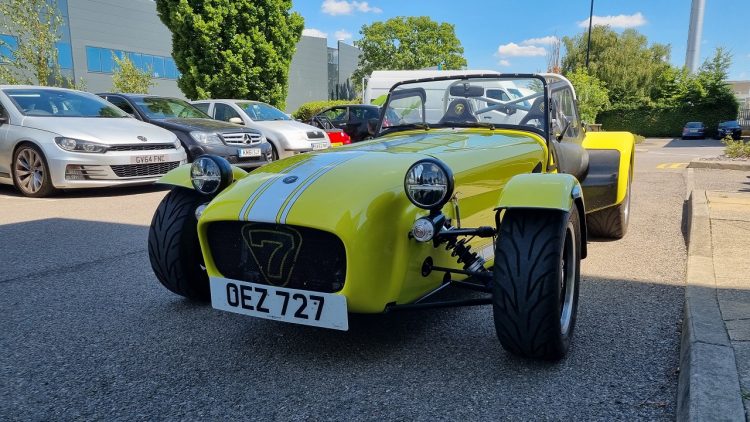 Everything is getting bigger and heavier these days. People like SUVs. Electric vehicles are growing in prominence. What once were small family hatchbacks are now the size of a previous generation saloon. We’ve driven some of the them recently, not least the Rolls-Royce Cullinan and Audi A8 L. Massive cars well over 5m in length, 2m in width and two-tons in weight. Driver aids abound, too, with power steering, ABS, adaptive cruise control and other such luxuries as air conditioning and self-cancelling indicators. It’s always a nice reset, therefore, to get handed the keys to a Caterham. The Caterham Seven 420R was the automotive reset and recalibration I needed.

At 3.35m long, the Caterham Seven 420R is fully 2m shorter than an A8 L. It’s almost half a metre narrower, too. Driver aids? It has seats, a steering wheel and three pedals. You’re on your own. The model tested did have padded and heated seats, but in the middle of a heatwave, these weren’t put to the test. Handy for the UK’s plentiful cooler months, though, because you would want to drive the Caterham Seven 420R at every available opportunity.

The numbers, too, are small. A 2.0-litre, four-cylinder naturally aspirated Ford Duratec engine offers up 210bhp and 203Nm of torque. That sounds massively underwhelming in today’s automotive world, but then the Caterham Seven 420R only weighs 565Kg, more than two-tons lighter than a Cullinan. Get your gear changes right and 0-60mph can be ticked off in 3.8secs. Now that’s quick, even in today’s hyper-acceleration EV age.

And the Caterham Seven 420R looks superb. Because all Caterhams do. The world has changed since Colin Chapman and the original Lotus 7 in the 1960s, but Caterham stoically refuses to change with it. Electrification is inevitable, but for now, old school purity remains.

Put simply, the Caterham Seven 420R is immersive to drive. It requires every last drop of concentration. If they want to get rid of texting and driving, everyone should be given one. It’s not a car for popping to the shops in, such is the rigmarole around getting started. Each journey becomes an event. I did have one instance of lowering myself in, pulling the door down and securing it, locking myself in the four-point racing harness and fitting the Momo steering wheel, only to discover I’d left the key in the kitchen. It’s a mistake you’ll only make once.

Besides, you get used to it pretty quickly. Once everything is switched on, it’s just you and the car. Botched gear changes, stalling, forgetting to put the lights on or cancel the indicators? It’s all on you. There are no parking sensors to guide you into a spot. There’s no mollycoddling of any description.

This only draws you in further to the Caterham Seven 420R. When you find that sweet, sweet empty B-road, you can make it sing. The steering is telepathic and there’s so much natural feedback to work with. You sit so low down to the road, with the exhaust running alongside you, that you feel at one with the car at any speed.

That’s another ace up the sleeve of the Caterham 420R – you don’t have to drive like a lunatic to enjoy it. It responds to every input, so just finding the right line through a corner and nailing a gear change is enough to plant a smile across your face. Bring in a bit of heel and toeing and you can really start to make pleasingly smooth progress.

Cards on the table, I adored the Caterham Seven 620S. With 310bhp to call upon, it was savagely fast in an effortless manner. The only problem was keeping the speed in check and keeping hold of your licence. The Caterham Seven 310R was the other way – it never felt quite fast enough and you had to work doubly hard to make it sing.

I thought that the Caterham Seven 420R might slightly underwhelm in the face of the 620S. With 100bhp fewer, would it thrill in the same way?

Yeah, it does. Remarkably, to a bang average driver like me at least, you don’t feel like you’re operating 100bhp down. It’s a very quick car. It’s a bit noisier in the cabin, mainly as a result of the exhaust running alongside you in the 420R versus out the back of the 620S. You’re not buying a Caterham expecting noise cancellation, so I wouldn’t say this poses any problem whatsoever.

Also, being a touch slower that the 620S is no bad thing. You can still reach illegal speeds with great haste, but not quite so much haste as the 620S. This just gives you a moment longer to bathe yourself in the performance of the 420R. The horizon doesn’t arrive at you quite so quickly, so plotting a course through corners and bends is that much easier, giving you a moment to work out the braking point and nail your gear change. There’s also that bit much more freedom to explore the rev range.

Now, all three, 310R, 420R and 620S, are delightful machines to drive. The basic set up is the same, with a 5-speed manual box mounted to a Ford Duratec engine in an unmistakeably Caterham package. It comes down to how much poke you’re looking for.

It’s impossible not to fall for the charms of the Caterham Seven 420R. It excels in a wider range of scenarios than you might imagine, too. I used it to commute into London and whilst it doesn’t like sitting it traffic, it handled the crawl up the A316 with aplomb, although you do feel miniscule in this environment.

Get it out in its natural habitat of a B-road and the Caterham Seven 420R delivers exactly what you expect. You can bend its will to fit other scenarios, but this is where it’s right at home, darting in and out of country lanes, offering one of the most immersive driving experiences available.

It’s nice that Caterham never moved with the times. The simplicity of the experience was a welcome recalibration after months of driving massive modern cars. They, of course, have their place, but nothing brings you closer to the driving experience than a Caterham. It’s use case is unapologetically narrow, but that, too, charms.

The Caterham Seven 420R also feels better balanced than its stablemates. The throttle modulation was better than the 620S and the dash, whilst still overly bright at night, didn’t burn the retinas like the 310R. I loved the power-on-demand of the 620S, but the 420R might just be the pick. You don’t miss the extra 100 horses present in the 620S as it’s still fast enough to do what any sane driver would require of it. But, then, are Caterhams for sane drivers? One thing’s for sure; they draw curiosity and provoke memorable drives like few other cars. For the money, nothing comes close.