The Audi A8 L is Audi’s flagship luxury saloon, packing all the opulence and refinement you’d expect. We find out what it’s like 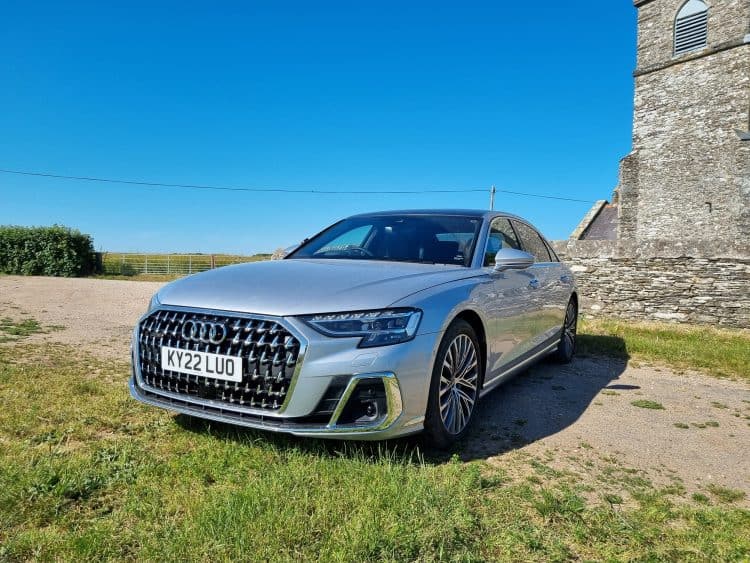 Whilst hybridisation and electrification aren’t to everyone’s taste, there are certain cars that they make sense for. At the performance end, Ferrari’s SF90 and McLaren’s Artura are deploying hybrid power systems to add more acceleration to the supercar scene. At the luxury end, cars like the Audi A8 L 60 TFSIe are using it bring an added sense of serenity. In luxury limos and SUVs, you’re barely aware of gear changes, so why bother with a noisy combustion engine? They also help with BIK rates and other such considerations. Cheaper to run, more frugal and more refined, they make a lot of sense in this part of the car market.

We reviewed the Audi S8 last year and it was a car we really liked. It had comfort and performance in a package so subtle no one really noticed it. I like that. Time then, to see what the new A8 offers in ‘normal’ guise. There’s no tubthumping twin-turbo charged V8 to propel you forwards at ungodly speeds. The model tested here is the Audi A8 L 60 TFSIe. As you’ve probably guessed from the intro, it’s a hybrid.

The emphasis in the Audi A8 L is most definitely on comfort and serenity. Adaptive air suspension comes as standard and helps this 2.5-ton barge to sail along fleet of foot. It’s a supremely effortless driving experience.

Hybrids can often be fussy in their power delivery. Trying to use battery power at every available opportunity, the engine, when prompted, can burst into life like someone who’s late to work. It’s all a bit flustered and not very subtle. The Audi A8 L addresses this issue rather well, with discreet power delivery from both sources. It’s only when you select dynamic from the drive modes and stamp on the throttle that the V6 makes its pleasant burble heard.

Not that you notice it accelerating with any great haste, even though it is actually accelerating with great haste. It’s not until you catch a glimpse of the head up display that you realise how quickly the Audi A8 L hustles along. If you were sitting in the back (which you might well be in one of these), you wouldn’t necessarily notice that your driver is being uncouth.

Even down a B-road the Audi A8 L impresses, performing in ways in which a car like this simply should not. At 5.3m long and 2.13m wide, it has a gargantuan footprint, so it never feels like a hot hatch. Nor does it feel its size. It’s brisk and sprightly, forever ploughing forwards and finding surprising levels of traction in corners. The Quattro system fitted as standard certainly helps, as does four-wheel steering.

Living with the Audi A8 L

We took it to Devon on our family holiday and it was a little precarious down the single track farm lanes where we were staying. There’s something contradictory about fretting over the possibility of oncoming traffic whilst having a reactivation massage from the seat. Stressful and soothing all at once. The Audi A8 L, as you’d expect, is fitted with all manner of safety features, so traversing this monolith around tight country lanes wasn’t as bad as it could have been.

The cabin is, simply put, a wonderful place to be. There’s enough space to swing a cat and the plush leather seats are very welcoming. Acoustic double glazing removes much of the outside world’s hubbub from your environment and you can peacefully progress towards your destination.

Being the Audi A8 L, there is 13cm more legroom in the rear. This affords rear passengers the utmost in comfort. Add the rear comfort pack which bring 10” TVs and lumbar support, and this is a great place to while away the time between meetings. The front passenger seat can even be moved forwards from the rear to create even more space to stretch out in. Blinds and darkened windows mean you can totally shut out the outside world if you need. The panoramic sunroof enables you to let more light in when so desired.

The only moot point is the pinched boot space in the hybrid. We got two suitcases in, plus a few smaller bits. If chauffeuring to the airport regularly, this might pose an issue. The boot isn’t small, but it isn’t as big as it’s combustion engine stablemates. We used the ample rear leg room as auxiliary storage to get the family to Devon and back.

Options in the Audi A8 L

Being a luxury limo, the Audi A8 L comes with a raft of standard equipment. Notable additions to the model tested included the panoramic roof, Bang & Olufsen Premium 3D audio and the digital matrix headlights. It is rather dark inside without the panoramic roof. Split into two sections, front and rear, it’s a box worth ticking. The upgraded B&O audio is superb. We’ve had this box ticked in other Audis we’ve reviewed, but there’s something about the shape of the Audi A8 L that elevated the audio experience.

Then there’s the headlights. They may seem a curious thing to get excited about, given they’re a minimum requirement on any car, but they’re superb. The illumination of the road ahead is remarkably good. The auto full beam function works flawlessly, which isn’t always the case. Light is cast beyond cars in front, without ever dazzling the occupants or oncoming traffic. So good are they that they even drew comments of wonderment from friends I gave a lift to. When was the last time you discussed your headlights with anyone?

The comfort and sound pack brings the parking assistance, although the cross-traffic sensor can be a bit fussy. It emergency stopped as I was reversing off my drive, despite being well clear of a passing car. I thought I’d hit something and got out to check, so unnecessary was the reaction.

Everything else comes as standard, from the ventilated massage seats to the privacy glass and blinds. The head up display is also included, although it’s Audi’s previous generation version. We reviewed the Audi Q4 e-tron sportback last year which featured the latest and greatest augmented reality model. It was very impressive, so it seems a bit odd that it hasn’t been deployed here, in Audi’s flagship model.

As the flagship model, the Audi A8 has to impress and it does. The styling is subtle and understated, even with that whopping great front grille (other manufacturers have gone even bigger and wilder), and this experience extends to the interior. It floats over the road and the miles tick past.

Whilst it’s a car to be driven in, it’s also a nice car to drive. The touchscreens are easy to operate and the virtual cockpit is customisable to your needs. With V6 and battery working in harmony, the Audi A8 L also kicks you down the road at a fair pace.

The Audi A8 L is perfect for long distances and commuting. You can pass by unnoticed, enjoying your massage and your favourite tunes. With Audi wishing to electrify all its new cars by 2025, the Audi A8 L also offers a tantalising glimpse into the future. When operating in EV only mode (with a range of around 30 miles), the calm and serenity are dialled up, with enough performance to keep your journey progressing.

Whilst I’ll always miss the performance and lunacy of a car like the Audi S8 and its bombastic V8 (did I mention that I liked the S8?), certain cars are going to fit electrification hand-in-glove. The Audi A8 L is certainly one such car.