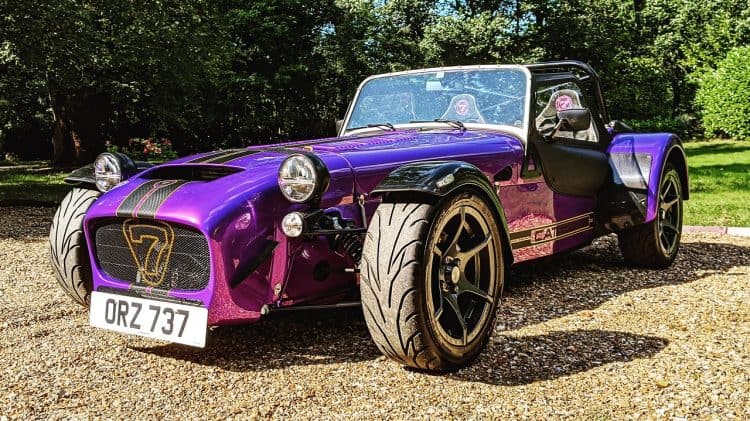 Few cars I’ve had the pleasure of driving have drawn so many admiring glances and comments as this Lamborghini Viola Parsifae Caterham Seven 620S. That’s purple to you and me, but there’s no denying it looks great. There’s something very accessible about it, too. Ferraris, McLarens and Bentleys have all carried their own appeal, but the Caterham is a different beast. People love it. Children stop to look in the cabin. Everyone asks questions. I met four of my neighbours for the first time whilst putting the roof on one evening. The Caterham Seven 620S was a social occasion.

It’s less of a social occasion once you lower yourself into the cabin. The model tested did come with heated seats though. They’ll be fitting adaptive cruise control and airbags next. Once the four-point harness is clipped in you’re ready for action. Turn the key, press the ignition button and the 2.0-litre supercharged Ford Duratec engine comes to life.

The performance is savage and takes a little bit of getting used to. The throttle was a tad tricky to modulate at first. At lower speed it’s advisable to leave a healthy gap to the car in front to allow the Caterham Seven 620S to lurch forward. Once you’re moving, however, everything becomes a lot easier.

So, it was a shame I spent my first two hours in the Caterham Seven 620S sitting in traffic on the M25 (thanks Insulate Britain!). It’s not a car that’s cut out for that.

Get it in the right setting, however, and it’s absolutely superb. The steering is wonderfully sharp, responsive and filled with feedback. The throttle response is on point. Running it through the gears further connects you to the experience. There’s nothing to assist; it’s just you and the machine. Threading it along a B-road is a delight. You’ll be grinning like an idiot.

Stick to your favourite roads

One of the advantages of ownership, I came to realise, is that you’ll use the Caterham Seven 620S only when conditions are right. I had the 620S Thursday to Tuesday and probably overused it. It’s not a car for a quick run to the shops. Without power steering, it’s a pig to park at the supermarket. There’s little space for you shopping. Getting in and out is an ordeal. It can become a little overwhelming in mundane settings as you experience everything.

I just wanted to drive this car though. Any excuse to get behind the wheel and I was strapping myself in again. The local Lidl is a two-minute drive. I went the long way. You’re always chasing the dragon of an empty road.

It’s so rewarding when you get there, too. Even on the motorway, however, the Caterham Seven 620S impressed. If you’re planning a weekend away, it’ll be a perfect companion. At 70mph the cabin isn’t as loud as you might expect and you can hold a conversation.

Mid-range acceleration is plentiful, too. A stab of the right foot and you’ll be making gaps easily. The only downside is the way the mirrors vibrate, so it’s vital you pay attention to what’s around you to complete lane changes.

Motorways lead to better roads, too. Pick a turn off, head out into the countryside and enjoy. Embrace the lack of a sat nav and just get lost. Darting from one corner to the next, it’ll be a while before reality catches up with you.

What about the more mundane in the Caterham Seven 620S?

As I mentioned, the Caterham Seven 620S isn’t a car for sitting in traffic. It is, however, more comfortable than I was expecting. I reviewed the Caterham Seven 310R earlier this year and the R specification, among other things, meant 13” wheels. The 620S was riding on 15” wheels and this makes tackling the everyday a lot easier.

Speed bumps can be cleared easily. The bottom of the car doesn’t catch on mini-roundabouts. The ride is more forgiving. High intensity LED headlights mean that you can see at night. The full beam icon doesn’t burn your retinas. The 620S is, for a Caterham at least, rather comfortable. You could live with this car. Perhaps not daily it, but certainly use it extensively. Just so long as it doesn’t rain. The Caterham Seven 620S is, like all Caterhams, a fair-weather car. But you already knew that.

Then you get back to an open road, stick it in second, floor it and… you’re at the horizon in no time. Another comment to note is the experience of friends who I drove in the 620S. Each said it was more enthralling and enjoyable from the passenger seat than the Caterham Seven 310R. No surprise, perhaps, given the extra oomph on offer, but the 620S is a hugely exciting car to see, ride in and drive.

I’m pleased that I drove the Caterham Seven 310R first. Going from naught to Caterham Seven 620S would be a bit much. Leaving Caterham’s car par near Gatwick, I struggled with the throttle response initially to degree that I got the backend out on departure. They must have wondered who on earth they’d loaned their car to.

It was a timely reminder, however, that you’re on your own in here. You have to respect a car like this and I like that about it. It also means it’s supremely easy to enjoy, because you can dance to your own beat. Everyone will experience a Caterham Seven 620S in their own way.

Where the 310R was perhaps a little underwhelming in the performance stakes, the Caterham Seven 620S delivers in spades. It feels every inch exactly what you’d expect of a Caterham. It’s vocal, raw, basic, enthralling, savage and it looks superb.

I remember watching a segment on a well known TV show about the Caterham superlight R500 and I always wanted to drive one. Having the opportunity to drive the Caterham Seven 620S was an opportunity, in a roundabout way, to tick one off the bucket list.

They say you should never meet your heroes, so putting such expectation on a car ramps up the excitement an extra notch. Did it disappoint? Did it hell. The Caterham Seven 620S feels every inch what a Caterham should feel like. It feels like the ultimate expression of the marque.