The Rolls-Royce Cullinan Black Badge takes the luxury SUV genre to another level of opulence and refinement. Is it everything you’d expect? 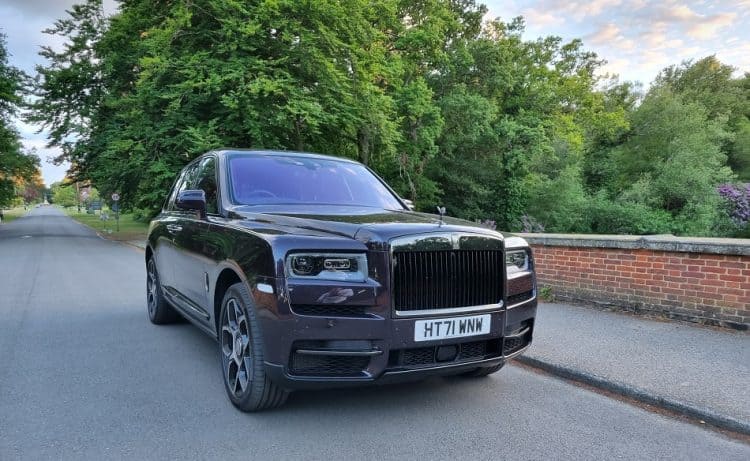 Recognition in any walk of life is something people strive for. Certain names dominate their landscape. Everyone knows who Cristiano Ronaldo, Bruce Lee and Beethoven are, even to people with no interest in their genres. Are they the best? Perhaps. None has the immediate distinction of Rolls-Royce, though. When describing something as the Rolls-Royce of its arena, the implication is clear – smooth, refined, unparalleled. Being the Rolls-Royce of anything is a hallmark of quality. So, what about SUVs? Well, we’re looking at the Rolls-Royce of them right here, the Rolls-Royce Cullinan Black Badge.

The relentless march of the SUV has touched all but a hardy few car manufacturers. Even the likes of Lamborghini and Ferrari have succumbed to the inevitable, with Lotus and (rumour has it) McLaren to follow in the coming years. As a distinguished manufacturer of large, opulent and oh-so comfortable vehicles, it was no surprise that Rolls-Royce launched the Cullinan back in 2018. “You think you’ve nailed this luxury SUV malarkey?” asked Rolls-Royce. “Hold my Petrus.”

The obvious starting point is the looks. Tempers have mellowed as the years have gone by. It’s not handsome in the way of an Aston Martin DBS or Jaguar F-Type, yet it makes up for this by being so imposing. And anyway, name a good looking SUV. They don’t really exist. There’s a reason people lower their cars; it’s to make them look sleeker and, yes, more attractive. Putting something on stilts rarely accentuates its beauty. Car manufacturers are even implicitly acknowledging this by producing ‘coupe’ versions of their SUVs.

So, the Rolls-Royce Cullinan Black Badge isn’t pretending to be something it’s not. Ostentatious and opulent; imposing and imperious, it lands the right punches with the target audience.

What’s the Rolls-Royce Cullinan Black Badge like to drive?

We’ll jump in with the driving experience, because to judge this book by its cover, it would be easy to conclude that the Rolls-Royce Cullinan Black Badge is made for the passenger rather than the driver. Yet the Black Badge motif is aimed at making the Cullinan more appealing to the driver. Extra horses are squeezed from its 6.75-litre twin-turbo charged V12. 591bhp is available, along with 900Nm of torque from 1600rpm. That shoves this 2.7-ton (before adding passengers and luggage) behemoth from 0-60mph in just 4.9secs.

That’s fast in a sports car, let alone a mobile home. The back end hunkers down, the V12 roars into life and you’re simply teleported to the horizon. It’s remarkably unfussy. Whilst there is no mention of ‘sport’ or any such vulgarities in the cabin, there is a button marked ‘low’ on the gear selector stalk. Press this and the Rolls-Royce Cullinan Black Badge immediately tightens up. A lower gear is held and the exhaust becomes ever so slightly more exaggerated. All 591bhp is now available via a healthy squeeze of the right foot.

You’ll be grateful of the heads up display at this juncture. The Rolls-Royce Cullinan Black Badge insulates you from any sense of motion; you can be going a lot faster than you intend whilst feeling like you’re doing 30mph. An obvious reminder of reality is much appreciated.

The straight line performance is obvious, but throw it into a corner and the Rolls-Royce Cullinan Black Badge can’t disguise its weight. There’s simply no cheating physics. Under heavy braking, too, you suddenly become aware of the mass. The rest of the time, it’s all so serene and effortless. ‘Low’ doesn’t suddenly transform it into a GR Yaris. You wouldn’t take it on a track day, but you already knew that.

What’s the Rolls-Royce Cullinan Black Badge like to live with?

In an everyday setting, it’s remarkably pliant. The steering has an almost indescribable feel of quality. It’s not too heavy, nor too light; not overly responsive or packed with feedback. It’s perfectly judged for the type of car this is. The ride quality, as one would expect, is right up there with the best. There’s a magic carpet quality to the Rolls-Royce Cullinan Black Badge, it just serenely floats over the road.

The ride height will undoubtedly hold appeal to many, too. You look down on the peasants in their Range Rovers and Bentley Bentaygas, with the Spirit of Ecstasy protruding from the bonnet, forever pointing you forwards. It undoubtedly makes you feel good about yourself.

The interior only adds to this sensation. An ocean of soft leather and metal bezels, it’s a wonderful place to be. The lambswool carpet makes you want to remove your shoes in order to appreciate it. The starlight headlining in the roof relaxes you further and then there’s the stereo. Rolls-Royce bespoke audio. It’s like wearing a pair of expensive headphones permanently. The Mark Levinson system from the Lexus LC 500 takes some beating, but the system in the Rolls-Royce Cullinan Black Badge kicks it into the long grass. It’s peerless.

The silence within the cabin undoubtedly helps. With over 100kg of sound deadening material (weight wasn’t a problem for the engineers at Goodwood), you’re always insulated from the maelstrom occurring outside of these four doors. On a long drive back from Worthing, Chopin on the stereo and the starlight headlining doing its thing, the Rolls-Royce Cullinan Black Badge was an extraordinary place to be. Relaxed is an understatement.

At 5.341m long, there’s plenty of space in the Rolls-Royce Cullinan Black Badge. Rear leg room is ample in the extreme. Picnic tables and TVs drop down from the back of the front seats and you can watch DVDs or play on your console.

Everything is very well though out. There aren’t too many physical buttons and everything is functional. The infotainment is BMW’s iDrive system and it’s intuitive to navigate. The Cullinan displays on all screens, except for the distance control when deploying adaptive cruise control, which displays a Phantom.

The quality of the materials, as you would expect, is trop drawer. The organ stops and vents are metal. All tactile components are metal or leather, expect for the stalks behind the steering wheel which are plastic. Tut tut.

The model tested came equipped with the optional event seating in the boot. This extends two (very comfortable) leather seats from the rear, accompanied by a cocktail table, so you can bed in and watch the polo or enjoy the views of Worthing’s coastline. The compromise here is the boot space it pinches. It makes loading very high, although there’s still space for suitcases and what not. My youngest’s buggy and pram top went in no problem, alongside other bags for a day out.

The major practicality issues are parking and refuelling. It’s long, as we’ve established, and 2m wide. On initial inspection the size of the Rolls-Royce Cullinan Black Badge is overwhelming, but after a couple of drives it shrinks around you. 2m isn’t actually that wide. It’s wide, sure, but not that wide. The array of parking cameras is certainly useful, though.

Likewise, the 100-litre fuel tank. Topping up with premium unleaded is unlikely to unduly trouble your bank balance if you can afford one of these. The regularity with which you do, however, may. I achieved 16mpg across just over 300 miles of driving. A full tank will take you from London to Edinburgh, like all decent grand tourers should.

Perhaps the greatest compliment you can pay the Rolls-Royce Cullinan Black Badge is that it meets your expectations. Comfort, refinement, a healthy dollop of performance and an abundance of luxury touches set it apart. It also, to me at least, makes sense. Rolls-Royce has been at the sharp end of luxury motoring since time immemorial, so building the vanguard of the modern interpretation of luxury and status – the SUV – is a logical step.

It’s also different enough to justify its branding. There’s no gear selector, the 8-speed auto always does the job for you and it never tells you what gear it’s in. There’s no revometer, rather a power reserve. The speedo is tailored to its 155mph top speed, with no wastage in the display. There are buttons to close the doors from inside. The suicide doors at the rear are another point of difference.

Another aspect that surprised me was the public response to the Rolls-Royce Cullinan Black Badge. I expected people to resent it. Instead, I was let out at junctions, received the odd thumbs up and got compliments at petrol stations. That was a pleasant surprise, given the dimensions and character of the car. People were happy to see one in the flesh.

If you’re in the market for a luxury SUV, the Rolls-Royce Cullinan Black Badge is the pinnacle. It hasn’t sacrificed itself at the altar of performance, trying to be something which it simply cannot be. There’s no weight savings and no attempts at lapping the Nürburgring. Luxury and refinement are the aim of the game. It’s a game Rolls-Royce has always played better than anyone else. The Rolls-Royce Cullinan Black Badge is no exception.